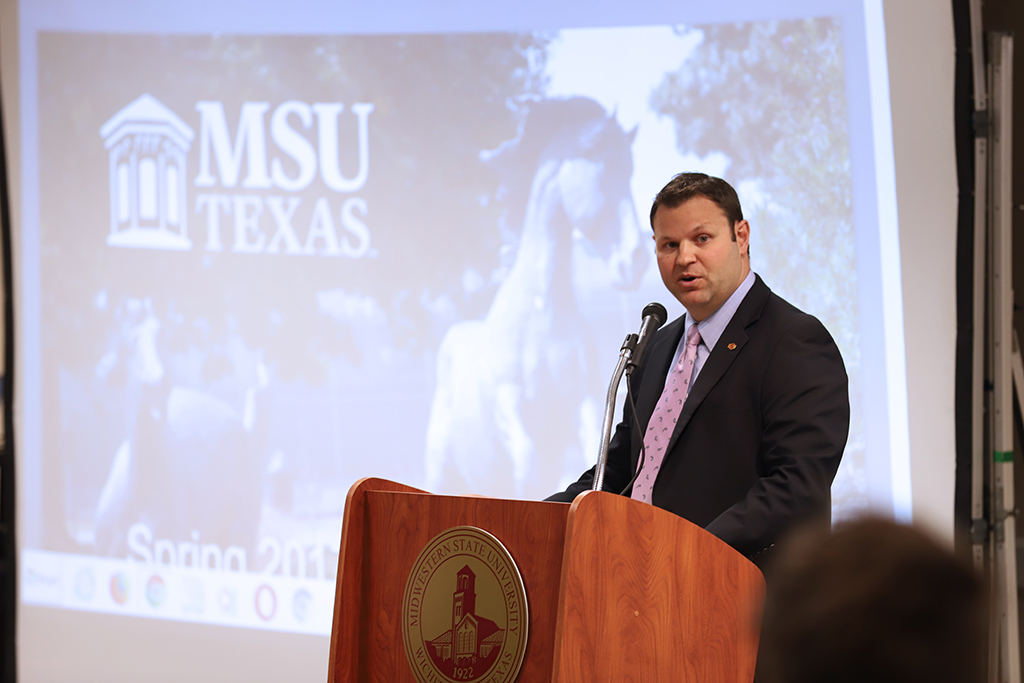 Matt Park, associate vice president of student affairs and and enrollment manament and dean of students, gives a brief discription of Title IX at the beggining of the Open Forum about campus safety in CSC Comanche on March 19. Photo by Bridget Reilly (Bridget Reilly)

Matt Park, associate vice president of student affairs and and enrollment manament and dean of students, gives a brief discription of Title IX at the beggining of the Open Forum about campus safety in CSC Comanche on March 19. Photo by Bridget Reilly

Matt Park, dean of students and associate vice president for student affairs, handled all of MSU’s Title IX-related cases — until he made a joke about sexual misconduct at a campus safety forum following spring break.

“I hope we don’t see another increase in reports as a result of last week’s activity,” Park said, followed by a laugh.

A few days after videos of this comment made its rounds on Twitter and the Times Record News, Park’s Title IX duties were partially removed and given to Syreeta Greene, director of equity, inclusion and multicultural affairs. University President Suzanne Shipley said this was also due to the extents Park had to reach with his job titles.

“Neither Dr. [Keith] Lamb or I knew the extent of the backlog that we have in Title IX,” Shipley said. “So as these students are taken through a fairly complex, formal process based on what their concern is, we only have one Title IX official [Park] and he had several offices to fulfill, so Matt ended up being charged with a real increase in this activity without any help or any reduction in his other roles.”

While administrators are looking for someone to fulfill the full-time role as Title IX director, Greene is the Title IX intake coordinator.

Her duties involved outreach to the victim of a sexual misconduct case to discuss the victim’s rights.

“Whenever there is a report, any type, of sexual misconduct, that is something that we need to look into,” Greene said. “There is an intake interview that is conducted with the reporting party or the person that makes the reporting, and that is not always the reporting party because certainly third parties can make reports. So whoever the alleged victim is, there is outreach to that person to talk to them about what their rights and options are and how they would like to proceed.”

According to Greene, her being given the position of Title IX intake coordinator was in response to the concerns of students about sexual misconduct cases.

“This was in response to ensuring that we address the timeline issues or the [issues of] timeliness that was brought up during the forum. So it was an interim measure that we can be responsive to that concern,” Greene said.

Students at Midwestern State University in Texas are fuming over administrators’ response to campus sexual misconduct and a joke about sexual assault made by the dean of students https://t.co/5ITTu1Fii7 #TitleIX #complicitMSU pic.twitter.com/An33s2pQaV

Greene’s training as a Title IX investigator and her relationship with students made her a good candidate for this role.

“[Greene] has an established relationship with students that seems to be solid and she seems to be respected,” Shipley said.

As well as giving Greene the duties of Title IX intake, administrators are also implementing a case management system in which those involved in Title IX cases will be given a case manager responsible for follow-up on investigations.

“The first structural issue is that we believe that students are angry because they put their trust in us by issuing complaints about any range of sexual behaviors they have found unacceptable,” Shipley said. “We took those complaints and we began to process them through a system without ever going back to them and communicating them about the progress of their complaints.”

In response to students’ complaints regarding being made aware of the investigation process, students will be assigned a case manager for investigations.

“One of the main things we had in line to implement that we’re expediting the implementation is a case management system where, if you come into me tomorrow and say, ‘I don’t like X. What are my choices?’ and we advise you to take the following steps, I will be back in touch with you to follow how those steps progress,” Shipley said.