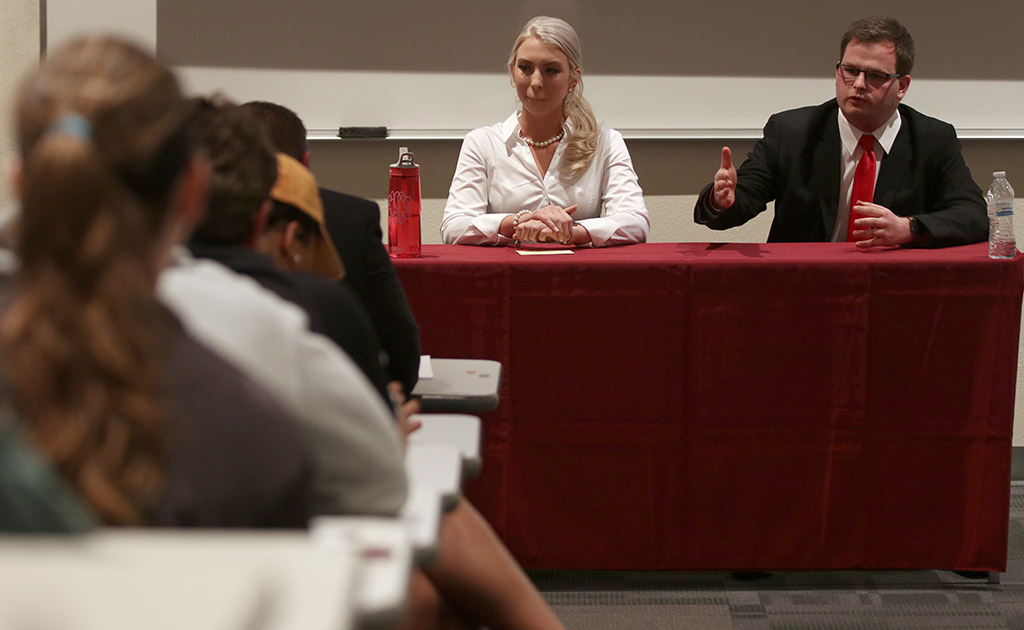 Ellie Gunderson, political science junior, and Steven Elhert, criminal justice senior, answer questions reguarding why they are the best fix for the president position during the Student Government Association Debate at Bolin 100 on Wednesday, March 7, 2018. Photo by Francisco Martinez

Ellie Gunderson, political science junior, and Steven Ehlert, criminal justice senior, answer questions reguarding why they are the best fix for the president position at the Student Government Association Debate at Bolin 100 on Wednesday, March 7, 2018. Photo by Francisco Martinez

To give candidates running for leadership positions on the Student Government Association a chance to answer questions and debate against their competitors, SGA members hosted debates on March 8 in Bolin Room 100.

The candidates are as follows:

Since two of candidates are running unopposed for their positions, they did not engage in debate and instead answered the questions presented by the moderator Jeremy Duff, associate professor of political science.

The candidates answered a series of questions from the moderator to give stances on certain issues and present why they should be chosen for the positions their running for.

Though SGA members did not plan to have students ask the candidates questions, after Markell Braxton-Johnson, sports and leisure studies junior, asked to give questions, the hosts allowed a limited amount of questions from students attending the event. Questions asked covered a variety of topics on campus, such as #ComplicitMSU, how candidates would deal with administrators and students during their terms and how the candidates would help organizations increase membership.

The event was live streamed through social media for those who could not attend.

What do you think the role of SGA is for the student body?

Torres | “The role of student government is to be the voice for the student body and to provide solutions for their problems.”

What would be your main goal in your office?

What do you think biggest issue facing students at MSU?

Ehlert | “My top priority would be safety. I have been here for two and a half years and there have been a lot of sexual assaults. Last semester we had seven sexual assaults on campus. We can do stuff that is going to improve that such as them implementing programs that are every fall called SHARP. It is a preventing program that teaches people how to defend themselves in uncertain situations. Also increasing wifi infrastructure on campus and figuring out why students aren’t graduating at MSU. [We need to] figure out how to keep students here at MSU, not just for their undergrad, but how to continue here for the grad program also, so overall have an open dialogue with students that are either thinking about transferring out or communicating with organizations about why students are leaving and how can we overall fix that issue.”

Why do you think you are the best person for the job?

Gunderson | “I think I am the best person to be SGA president because I am familiar with a lot of different people and groups on campus, and I am working my hardest to keep familiarizing myself and knowing what issues are to help them solve their issues. I have different sides of groups and organizations, I’m willing to work with and work to achieve what they are wanting to accomplish here at MSU. Being on the volleyball team, I have experience with managing as well. I won an outstanding teammate award last year, and it shows that I have the abilities to be a leader whether or not I have taken a student leadership role outside of volleyball. I also have been head coach so I know what needs to be done and how to organize things.”

CORRECTIONS: In a previous version of this story, Steven Ehlert’s last name was misspelled. The Wichitan regrets this error.