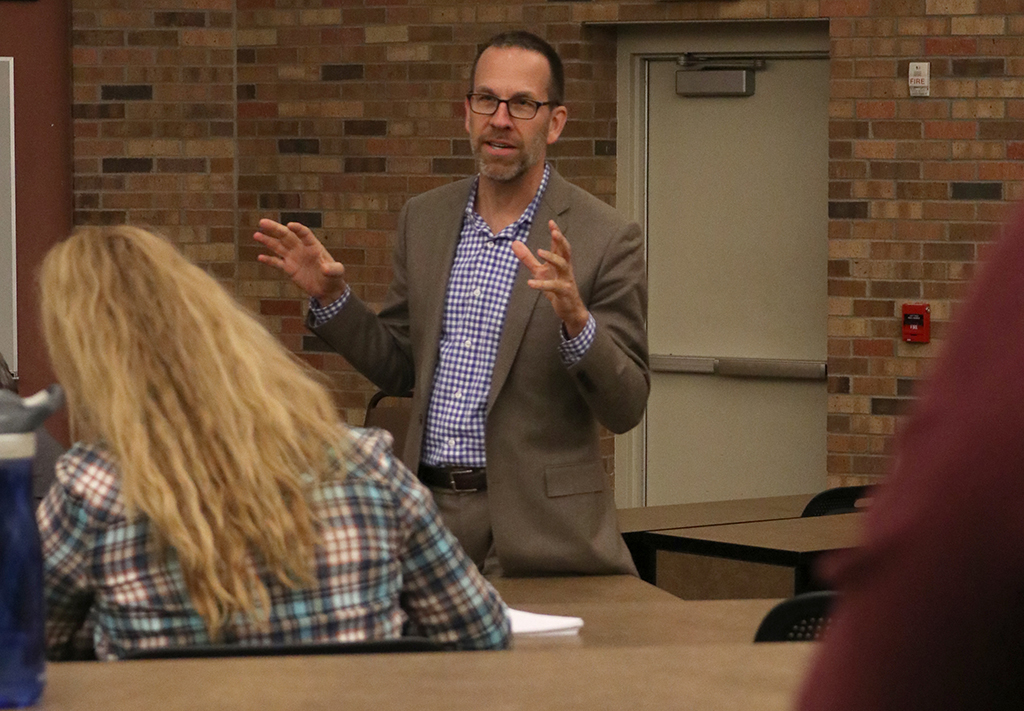 Moss said that the construction will begin in May and will continue for about a year, coming to an end the September of 2019.

The interior renovations will include new carpet, paint and furniture equipped with outlets and eleven pod study rooms.

Renovations will also be done to the two elevators in the library. Moss said one of which doesn’t meet any elevator regulations known to mankind, it doesn’t even reach the third floor. As a result they are installing a new elevator.

“We are adding another elevator, that will take you to all three floors, and it will be very conveniently located. It will also meet all of the Americans with Disabilities Act requirements and more than one or two people can be on it,” Moss said. “If you are in a wheelchair, you can get it and turn around to back out. That is definitely an important part of this project.”

Due to much of the central space being taken up by furniture and pod rooms, computers and books will be kept to a minimum. However, Moss said he is confident there will still be an adequate number of both.

Bathroom renovations are also being made to the library starting this summer.

A steering committee was created by the university to be in charge of the final renovation designs.

To make sure the money invested keeps it’s worth and to preserve the renovations being made, they have been very careful in the type of materials being selected.

“We’ve been really careful in the type of materials being selected, the colors that we are selecting and the durability of things like the carpet and the furniture,” Moss said.

Maria Peña, SGA president, said based upon what she had seen in the plan and the powerpoint presented by Moss, there was nothing stating Midwestern State University or MSU Texas.

“Since we are moving towards a new branding, we are no longer just MSU, we are MSU Texas. The initiative in moving forward was to create that kind of identity to solidify who Midwestern is,” Peña said. “If you look online and type in Missouri State, Michigan State, a bunch of MSU’s and MWSU’s [show up]. My comment during the meeting was to simply make sure that the architects implement somewhere whether it be Midwestern State University in bold lettering, on a wall, outside, or on the carpet with our insignia.”

Peña said the university now has two major marketing logos one for branding and the other for media.

“My concern was that they just add that somewhere to separate us from just being a public library or just a regular library in general,” Peña said.

Deshaunte Rolle, biology senior, said she approved of the renovations presented by Moss.

Rolle said, “I like that they are making it a better learning center and that they are basically changing the entire infrastructure, updating it and making it more modern.”

J’Anne Robinson, nursing sophomore, also said she was looking forward to the changes being made.

“I like that they are making it more open and invited for students. Overall, I like the design , the color, and the furniture,” Robinson.