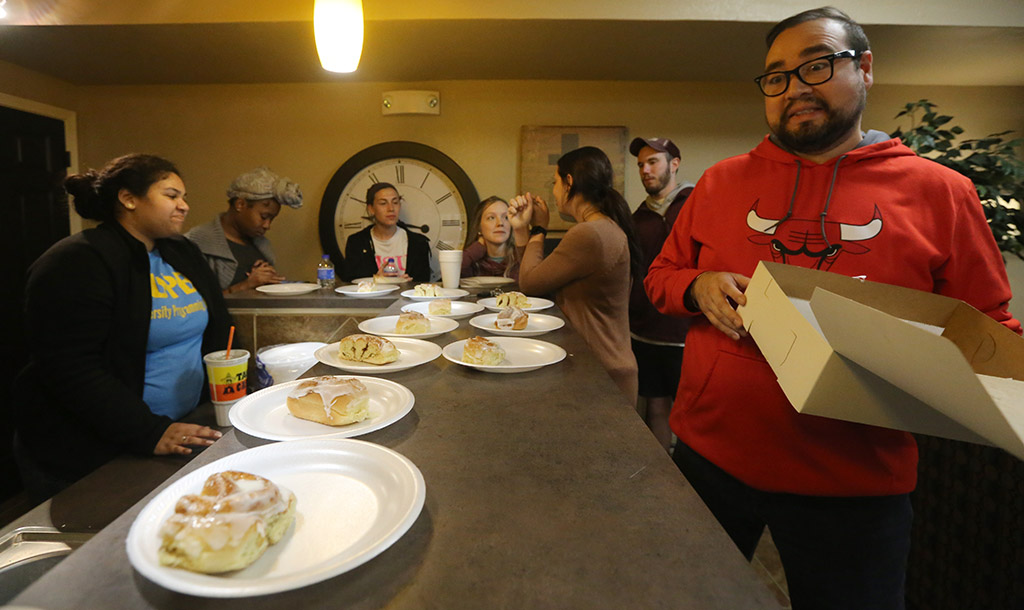 Claudio Rodriguez, complex coordinator, is excited at the sight of a cinnamon roll during the Late Night Breakfast at Sundance community kitchen on Tuesday, March 6, 2018. Photo by Francisco Martinez (Francisco Martinez)

Claudio Rodriguez, complex coordinator, is excited at the sight of a cinnamon roll during the Late Night Breakfast at Sundance community kitchen on Tuesday, March 6, 2018. Photo by Francisco Martinez

To give students a break from their studies and enjoy a late-night breakfast, the Sundance resident assistants hosted Late Night Breakfast in the Sundance community kitchen, in which they handed out cinnamon rolls, pigs in a blankets and fruit on March 6. The room was filled with conversations and laughter as the approximately 35 students enjoyed the food provided.

Michelle Lopez, exercise physiology senior, said, “It’s free food and I really needed a study break. I saw a lot of people here and it was really fun to just kind of relax and hang out people I knew.”

“I go to all of the events that I hear about because of the free food,” Ferritz said.

Music was playing as students waited in line to fill their plates with delicious breakfast treats.

Sundance 2nd floor RA Jose Torres, sophomore finance, was one of the organizers of the event and said the event was organized at the beginning of the school year.

The only complaint that students voiced was the absence of pancakes.

Torres said, “The only thing that I would change is to have pancakes next time. We didn’t have pancakes this time because it would be more time to make.”

Other students shared Torres’ sentiment and also said they wished there were pancakes.

Ashley Valdez, junior psychology major, said, “I wish they had pancakes. I would definitely come to something like this again.”

The event provided students from all of the dorms a chance to relax, socialize and eat breakfast for dinner.

Lopez said, “I think the late night breakfast theme was a good idea and had a really good turnout.”