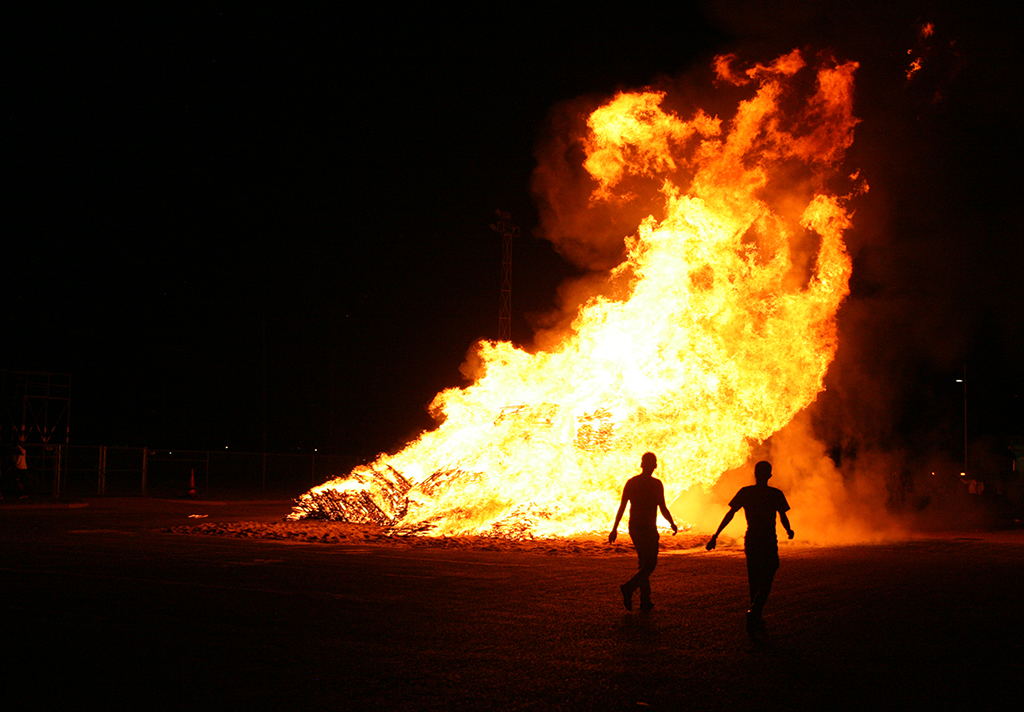 From its beginnings in 1922 as a junior college housed within a high school building, Midwestern State University has become a campus of 255 acres and 70 buildings. The university offers a variety of academic programs in liberal and fine arts, mathematics, sciences, business and applied sciences. Whether alumni consider themselves Indians or Mustangs, the university, now with 6,064 students, has carried on a tradition of pride.

The name “Wichita Falls” originated from the first settlers of the area in the 1700s, the Choctaw Indians. The name “Wee-Chi-Tah” means “waist deep,” which was the description of the river they  built their tribe around then.

“Back in middle school we learned about the Indian tribe that sent one of their women into the river to test its deepness and cross it,” Melody Gregory, art junior, said. The sculpture is located on Wichita Street, off Martin Luther King Jr. Blvd.

In 1937 the college attained a new, 40 acre campus of its own located on the south side of town. The Hardin Building rose above pastures and wheat fields. In that year the college was renamed Hardin Junior College, in honor of Mr. and Mrs. John G. Hardin.

In January 1950, the name changed to Midwestern University, the junior college remained as Hardin Junior College.

Another change in the university’s status came Sept. 1, 1961, when the 56th Texas State Legislature made Midwestern University part of the Texas Colleges and Universities System. In 1975, the Texas Legislature changed the name to Midwestern State University.

From Indians to Mustangs

In 2006, MSU changed its mascot from an Indian to a mustang named Maverick. The Indian served as the university mascot for 83 years before retiring. The NCAA opposed any “hostile” Native American mascot or logo as abuse toward their culture, which resulted in the change to no longer allow Native American logos.

“I saw some Native Americans that were interviewed about it didn’t care or show to have any problems with the mascot,” Logan Canifax, art junior, said. “They took it as a compliment because they were being recognized as the ones who settled here first. I wish we were still the Indians. We have enough mustangs in the area,” he said.

The campus continues to honor Native Americans with street names such as “Tomahawk” and “Tee-Pee,” statues like the Sunwatcher that represents the university’s 75th anniversary and the South Plains Indians.

About 200 students marched around campus May 10, 2018 for the first Senior Walk, visiting cheering faculty and staff from each college.

“It gives us a chance for the faculty and staff who have worked with these students over the course of their time here to celebrate,” Johnston said. “A good time for the students to reflect on their time here with one last official walk here. It represents the transition from student to alumni.”

Johnston said he is trying to establish the walk around campus as a tradition including brief congratulations from the deans of each college as the seniors walked around campus led by a police escort.

“You want it to be a memorable time with your friends that you’ve gone to school with,” he said. “It builds and maintains that connection with the university. I hope it grows every year.”

Johnston said the Alumni Association and Student Alumni Council helped to plan it along with the academic deans.

As he welcomed the crowed, Mitch Kipp, political science freshman and member of the Student Alumni Council, said, “I hope you can all enjoy reminiscing about the good times and experiences you’ve had here.”

The seniors finished their walk on the courtyard in front of Dillard eating maroon and gold cupcakes.

Homecoming is a week-long event here at MSU that provides activities for students, alumni, family, and friends. Every year the school parade goes through the campus.

“There are tons of traditions during homecoming week. It brings different social groups together, and the rivalry is pretty cool during competitions like building the best float. And you get to go all out with school spirit,” Mark Broomfield, exercise physiology junior, said.

At the Cardboard Boat Race, one of the annual events during which students construct a cardboard boat to successfully travel across Sikes Lake.

“You can only use the duct tape and cardboard to make the boat, and really you just have to strategize with the people in the boat to make it across without sinking,” Taylor Courtney, mass communication senior and member of Sigma Kappa, said.

The homecoming bonfire is another tradition before the big homecoming game. Students can trade in other university T-shirts in exchange for a bonfire T-shirt throughout homecoming week. The T-shirts that get turned in are added to the bonfire collection.

“The bonfire was pretty fun, and I liked seeing the Tarleton shirts on there,” Katie Brown, kinesiology sophomore, said.

Beginning in the late 1920’s, the Burns family of Wichita Falls began a Christmas celebration for the first time. The celebration included setting up a small Christmas tree on their front porch with one single bulb. As time went on Mr. Burns succeeded in the oil industry, and the couple made it their tradition. Each year they added a new display.

In 1954, Mr. Burns passed away in a car accident, but Mrs. Burns continued the tradition in memory of her husband. From the years 1954 to 1970, throughout Christmas season, Mrs. Burns displayed bright, colored lights on her front lawn. At the time, the display became so large and detailed that Mrs. Burns had to hire help each year to maintain it.

In 1971, Mrs. Burns passed away, and the display stopped. However, in her will she left the decorations for her son so he could donate them to Archer City. The display remained in storage for three years until the death of her son. Archer City offered the display to MSU to publicly show it free of charge.

“I’ve gone since I was able to walk,” Canifax said. “The reason we always went is because when my grandma was a kid, she saw it start out in the Burns’ yard. She lived out in Valley View so if she could make it into town around Christmas, it was a big deal for her. Now she likes to take us and reminisce about it when she saw it as a kid.”

Wichita Falls is home to Sheppard Air Force Base, named in honor of Senator Morris Sheppard, former chairman of the Senate Military Affairs Committee. The base opened on Oct. 17, 1941, it trained aircrew and aircraft mechanics during World War 2. Today, SAFB is the largest and most diverse training base in air education and training command in the United States. It holds a daily population of 15,000 and graduates 62,000 airmen annually.

“I lived on base for a couple of years, but I’ve been going my whole life, whether it was getting groceries, work, or I’ll still get my hair cut on base,” Branson Spencer, music freshman, said.

During the 1920’s oil industry boom, a conman and Amarillo contractor named J.D. McMahon made his mark on the city by creating the world’s smallest skyscraper – and getting away with it. McMahon planned with investors to assemble a multi-story office building that would overlook Oklahoma. The skyscraper was the measurements of a 480-foot building, but McMahon intentionally did not mention to his investors that his blueprint was measured in inches rather than feet, which made it 480-inch (40 ft) skyscraper. As a feature in “Ripley’s Believe or Not,” the building is still a visible landmark located in downtown Wichita Falls on the corner of 7th Street and LaSalle.

MSU developed a tradition creating the same look for buildings on campus – all with “MSU brick” covering the exterior of the buildings.

However, that changed, when the only supplier of the brick stopped making it.

“There was a source for the original brick and then everybody basically quit making it,” Kyle Owen, associate vice president for facilities services, said.

But that didn’t stop the buildings from being designed in brick.

Debbie Barrow, director of board and government relations, said a company in Texas developed the MSU brick that was used for all campus buildings but over time the original materials used to make the brick ran out. In addition, Legacy Hall, the newest dorm building still resembles the other campus brick but isn’t the exact same.

“When we built the Dillard building, they came with some new bricks and we had to see which bricks matched the best,” she said. “The original MSU brick is no more. But the replacement has seemed to serve us well since Dillard was built.”