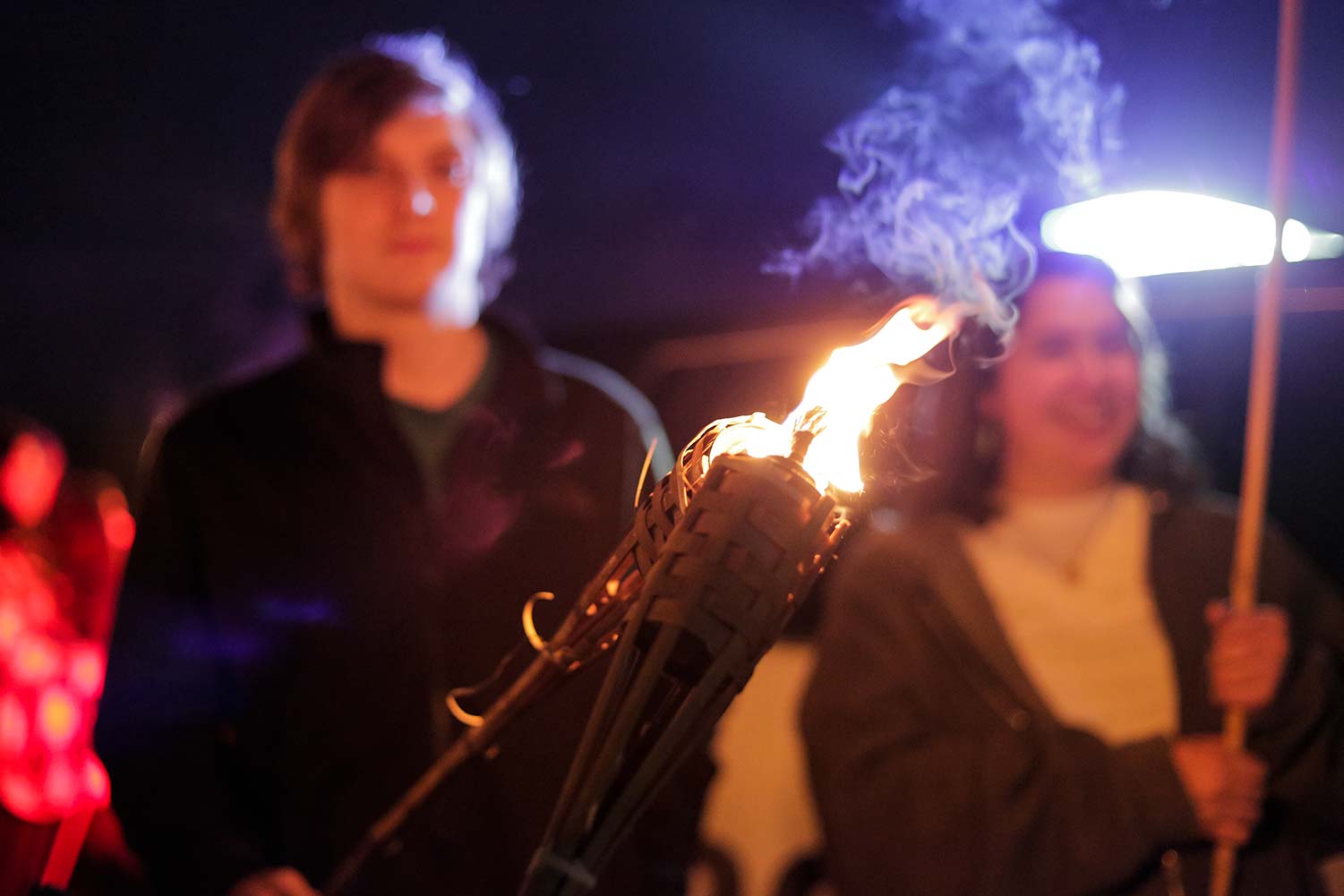 Students share their torch flame before the start of the parade, Oct. 28. (Colin Stevenson)

Students share their torch flame before the start of the parade, Oct. 28.

This years homecoming celebrates 100 years of MSU with the theme being centennial celebration. Students incorporated the theme in the traditions and competitions throughout the week. 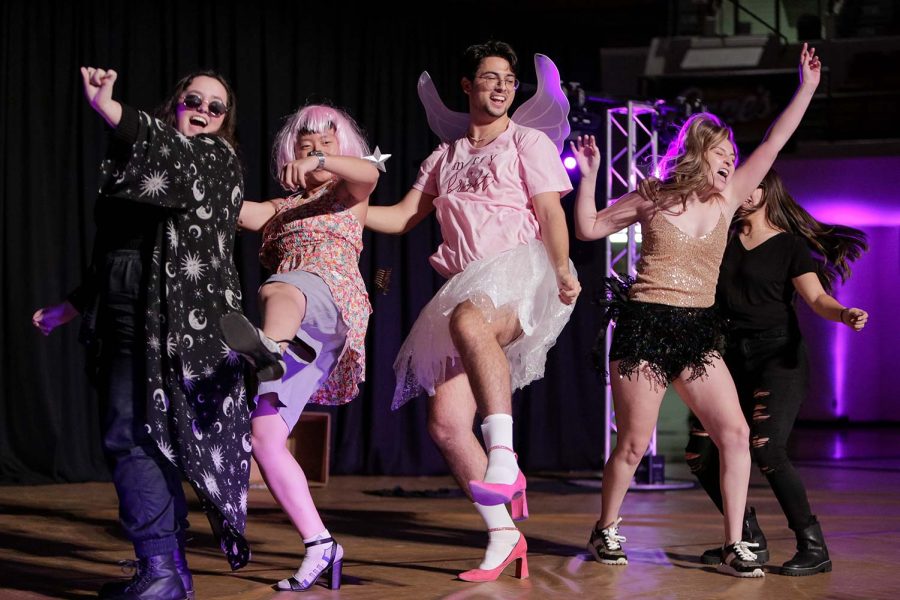 “I liked hyping the crowd up and when they would get excited it make me excited and just seeing all the teams trying their hardest was pretty cool,”  Esmeralda Carlos, marketing senior and MC.

The homecoming theme this year was centennial since this year MSU Texas is 100 years. Organizations had to incorporate the centennial theme into their performances which many did by lip-syncing a remix of songs from various decades.

“They all followed the theme. There were songs from all the decades so what can we expect, that was the theme. It was really good,” Carlos said.

A total of 12 groups competed in the lip sync competition but there were only four finalists. Tied for third was the Redwine Honors Program, and the Caribbean Students Organization and the Lions club. Second place went to cheer and first place went to the Stang Dolls.

“We feel ecstatic, we feel like we worked hard…for this, we’ve been actually trying. I’m so proud of the girls, myself and even the young lady Ta’Ana Henderson who even thought of this,” Jayla Walker, criminal justice junior, said.

The lip sync competition was the Stang Dolls’ first performance. They began practicing at the beginning of September and tried to practice whenever they could according to Walker. The theme for their performance was women’s empowerment.

“We decided to go through every decade starting the 80s and we picked the hottest Black women in each decade. That was Whitney [Houston], SWV, Beyonce, Nicki [Minaj], Cardi,”

The four finalists performed again during the homecoming pep rally on Friday. In the end, the Stang Dolls took first place again.

Halfway through homecoming week the campus celebrated Maverick’s sweet 16 in Jesse Rogers Promenade with a picnic and music from various decades.

The picnic provided a lunch of mac and cheese, pulled pork barbeque, chips, a birthday cake and more. Students with a meal plan received the food at no additional cost while those without a meal plan paid seven dollars.

“There was a lot that went into the planning…the basics, get the food and make sure Mav has a great day for his 16 because you only turn 16 once,” Adriana Brown, marketing senior, said. 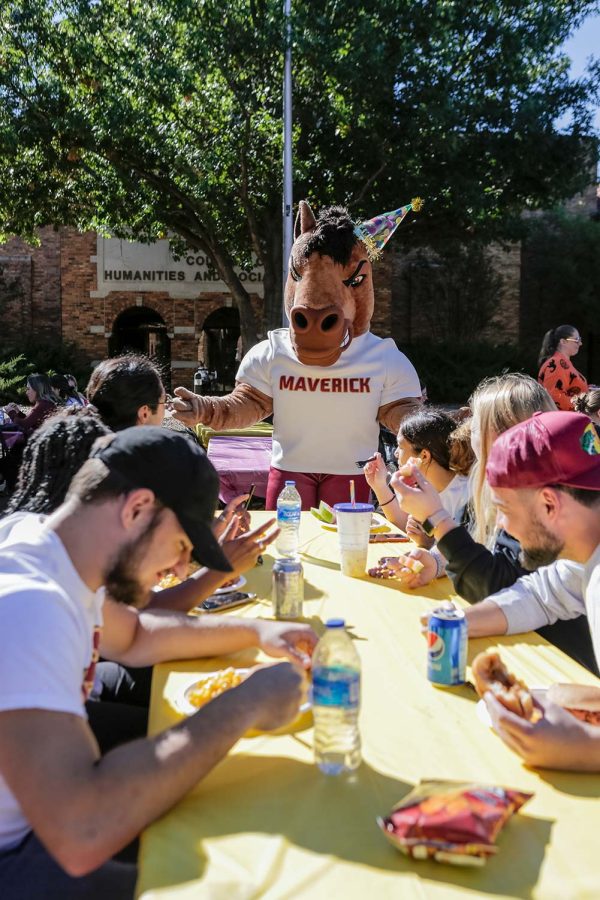 Gallery|3 Photos
Colin Stevenson
Mav chats with some students, making sure they're enjoying the food, Oct. 26.

During the celebration, Maverick could be seen with his driver’s license. To celebrate this milestone student leadership and involvement filmed Maverick trying out different cars and a compilation of the departments on campus wishing him a happy birthday.

“I think it’s pretty cool [that we celebrate his birthday]. I would have thought he was older,” Fleming said.

Maverick’s 16 birthday marks 16 years since he was unveiled as the new mascot for MSU Texas, replacing the previous mascot the Indians. 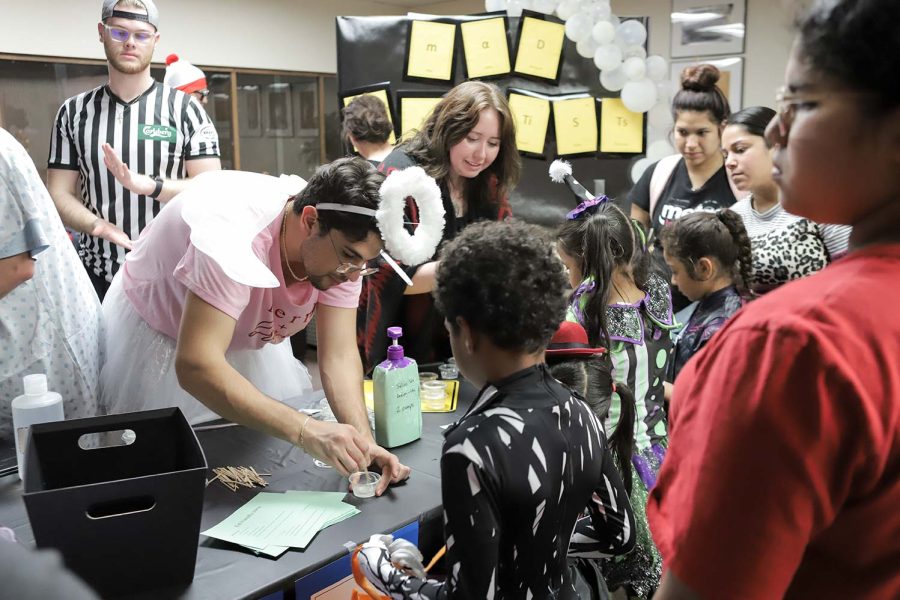 On Thursday, October 24 at 6 pm, MSU hosted a trunk or treat in the atrium of the Clark Student center. The atrium was decorated with tables set up by organizations on campus that fit within the theme of MSU’s Centennial Celebration and Halloween.

The center and its environs were filled with kids, teens, young adults, and parents queuing up to attend the event. The atrium was filled with costumes and a pop of color as the attendees piled in to visit each of the tables that the organizations on campus set up for the event.

Alpha Psi Omega, the organization with the winning set up had a haunted house decorated to entertain the attendees, the guests had the opportunity to get into the haunted house and get a Halloween surprise.

College Students from outside MSU were also present at the event

“My mom used to work here so I don’t know I’ve always felt like this is a place of calm and nice and relaxing just to come here and hang out” Jack Boller, A Vernon College student said.

The student’s costume was inspired by His name

The event was also popular amongst the student body at MSU

“My RA is actually doing this competition and every event we go to we get a point and she’s going to give the winner a gift card at the end of the semester, so I’m competing for that but also I was like looking at the campus events and I was like oh trunk or treat I’m gonna go,” Katie Mapes Art freshman said.

The Friday of homecoming week hosts some of the biggest traditions on campus. The cardboard boat race being one of them. This tradition has organizations on campus rowing across Sikes Lake with their boat that has to be at least 75 percent cardboard. Other requirements are the boat has to reflect the organization and the homecoming theme which was the centennial year.

“Seeing how the boat performs [is the most exciting part of the cardboard boat race]. You put all the effort into it and we get one shot. It’s exciting to see what comes out,” Ernuel Tong, mechanical engineering senior, said.

The start of the race had many boats sink before they had the chance to row. In the end MSU Lions Club and the Caribbean Students Organization’s boat was the one that won. In celebration the organizations rowed their boat across the lake a second time.