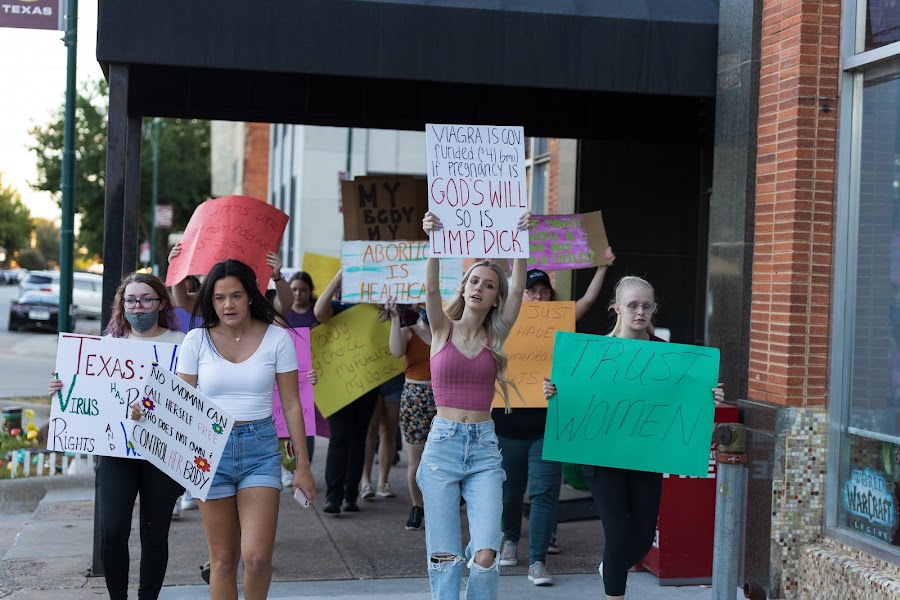 “I oppose the new law because if I did become pregnant, and birth control is not 100%, I would no longer have the option for abortion and be forced to raise a child that would go through the same chronic illnesses as me,” Megan Peters, nursing freshman, said. “Babies deserve life, but they deserve a quality life. My doctor told me that if I have children, they will most likely go through the same thing as me.”

The march began at 2 p.m. with a rally in front of the Wichita County Courthouse and continued at 6 p.m. at The Downtown Welcome Center, where women sang chants and gathered with signs. Peters who led students down Indiana Street said she is frustrated with Texas’ restrictive abortion bill.

“I suffer from chronic illness that will be passed down to the baby. It’s hard. I’ve fought for my life multiple times in the past four years, I cannot put a baby through that. I refuse to have children and put them through that,” Peters said. “It’s just not right.”

Speakers at the march encouraged others to register to vote and sign up to volunteer for nonprofit organizations such as Planned Parenthood. Others spoke about getting to know your representatives and candidates to let them know how you feel, so they will listen and help fight for women’s rights.

“Bottom line, we got to fix Austin. If we don’t know our candidates and go out and work for our candidates, we’re going to have four more years of the current governor that passed this law in the first place,” Marilyn Wayte, Women’s March organizer, said. “What matters is how you vote.”

Wayte and women right’s activist described the march with one word: youthful. The speakers were of varying ages and spoke of how long they have been fighting for women’s rights, adding that the young university crowd is the future.

“Y’all listen to Megan. She’s 18 years old. This is the future of this movement because some of us have been fighting for generations,” Wayte said. “I want her to be successful; she is our future and she can get more young people involved. And we have to have young blood.”

Speakers shared opinions about taking care of babies and children that have life today and the many that suffer because of neglect from their parents. Other attendees spoke of unique situations such as poverty and suffering other insecurities that made them want to join the march.

“The hardest part is knowing my experience is not unique. I grew up in poverty. I’m fine now, but that was hard. So, when we talk about life is sacred. Sacred for whom? We need to protect the life we have here now. But we have life today,” Isabel Black, history and sociology junior, said. “Like me, I’m going to college and doing well, but there are so many people that are not and will not have the ability to do so. What kind of life is it if you are stuck in these cycles of poverty?”

Some protestors held posters and signs with different slogans and comments about politicians. One poster said, “Stop Forcing Your Beliefs on Others, Colonizer!” Another said, “Protect Safe Legal Abortions.” The march went north on Indiana, past Wichita Falls Brewing Co. that was celebrating Oktoberfest. The march circled the block twice and gained momentum with chants such as, “My Body, My Choice.”

“I’m doing this because it’s my right and it shouldn’t be taken from me. It shouldn’t be taken from anyone,” Brittney Roberts, sociology senior, said. “No child should have to be brought up into a space where they aren’t wanted. That’s what is going to happen because the people who are needing abortions are people of color that are poor [and] white people who are poor. All of them are poor who don’t have access to the care or the finances that are needed to support people.”