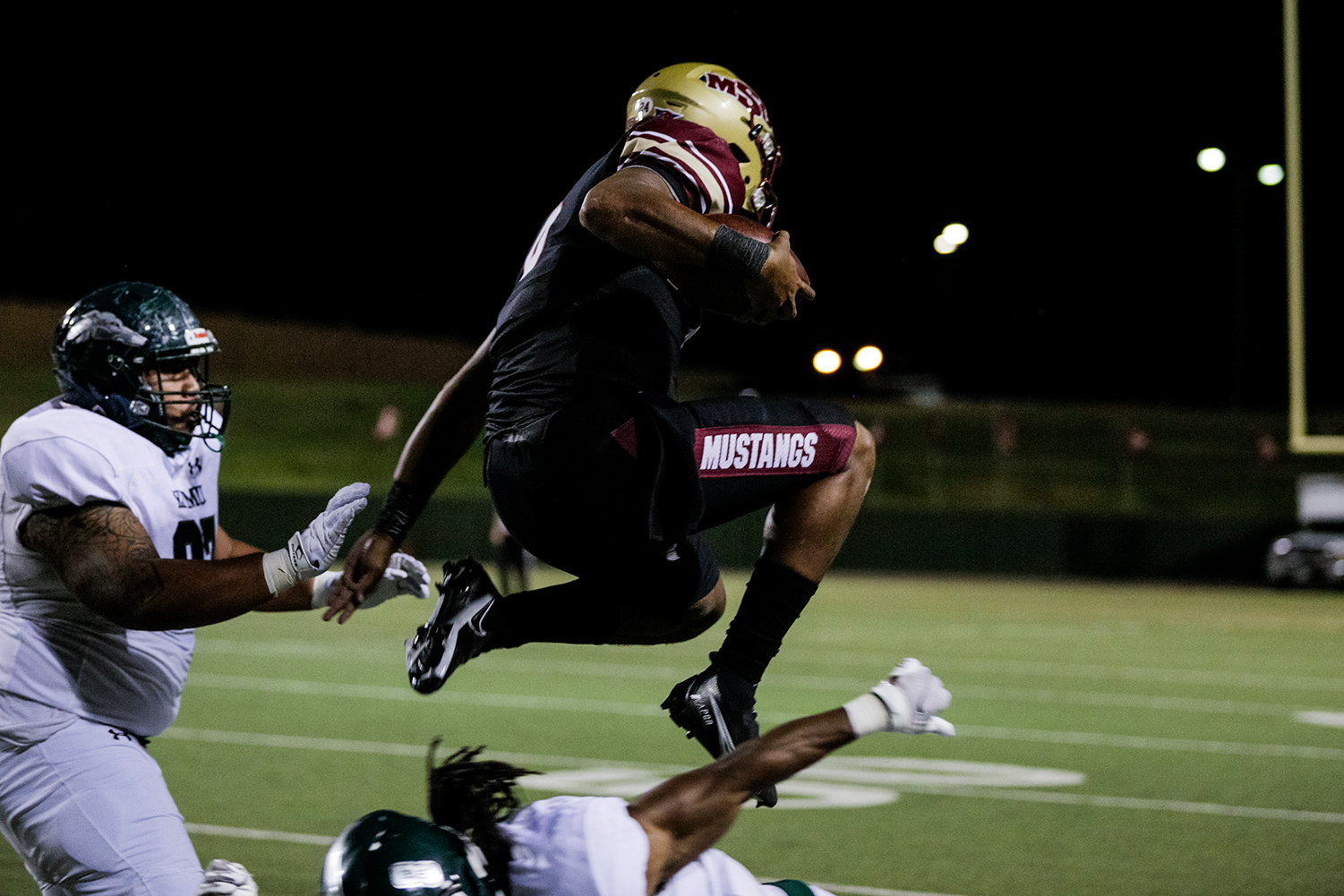 Masters of sports administration senior and quarterback Dillon Sterling-Cole leaps over an opposing Eastern New Mexico player to dodge his attempt at a tackle, Sept 25.

“Being at home didn’t feel like it was the past three weeks. We didn’t play as well as I thought we would…the touchdown in overtime saved us,” Bill Maskill, head football coach, said.

Dillon Sterling-Cole (No. 6), quarterback and masters of sports administration senior, looked as if he were going to run toward the end zone, but instead stopped and threw the pass on target to Kylan Harrison (No. 17) , wide receiver and sport and leisure senior, for the winning 10-yard touchdown in overtime.

“We played a pretty good game and I’m glad I made that reception. We had some good contenders tonight,” Harrison said.

Sterling-Cole passed to Harrison for an 80-yard touchdown in the first quarter, then to (No.1) K’Vonte Jackson, kinesiology senior, on a 73-yard pass.

“All in all we stuck to it, play by play; we came out with the victory,” Harrison said.

Eastern New Mexico scored 24 points in the second half to tie the game that forced overtime. Three touchdown connections from the opponents, Nathan Valencia to Zachary Fields happened all in the fourth quarter.

“We got up and we got complacent. We weren’t able to finish like we need to finish,” Maskill said. “I thought they out played us in the second half.”

In the fourth quarter, with two seconds left in regulation, Eastern New Mexico’s Cooper Hamilton connected on a 38-yard field goal. The field goal tied the game and forced the overtime. The MSU defense stepped up and stopped plays early, but the final score was even.

“We missed a lot of opportunities on the field, but we made up for it in overtime with great defense, and we stayed poised,” Sterling-Cole said. 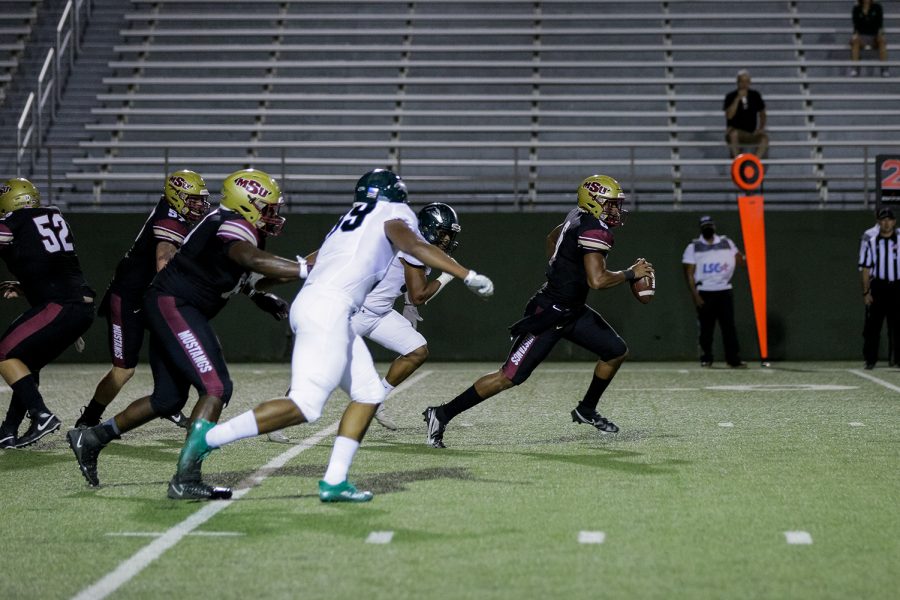 The defense put up 14 tackles and put pressure on Eastern New Mexico’s quarterback throughout the second half.

“We made plays when we needed to, but didn’t throughout the game,” Maskill said. “Right now our biggest hurdle is us.”

Quarterback, Sterling-Cole finished with 300 yards with 19-of-34 passes with three touchdowns and two interceptions. Jalen March (No.12), running back and education freshman, ran for 73 yards with 12 carries. Fernando Piedra (No. 87), psychology and Spanish sophomore, punted and averaged 34.2 yards with two punts inside the 20-yard line. 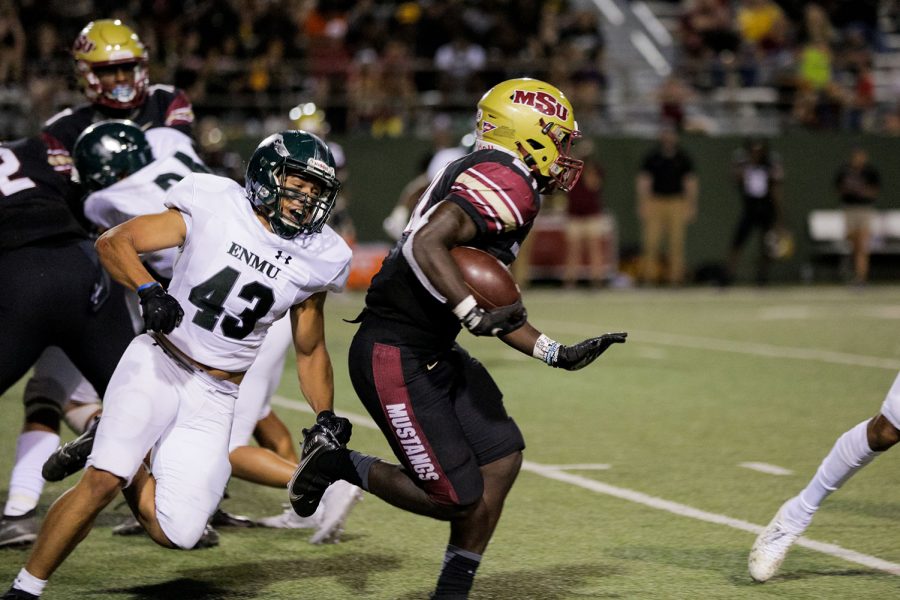 “We finished in overtime when we needed to do that, but I mean, at that point it was like I told the team, we dodged a bullet; big-time bullet,” Maskill said.

MSU is now 4-0 along with only eight other undefeated Texas schools. The next opportunity to catch the Mustangs go 5-0 will be next Saturday, Oct. 2 against Central Washington at the Tomlinson Stadium. 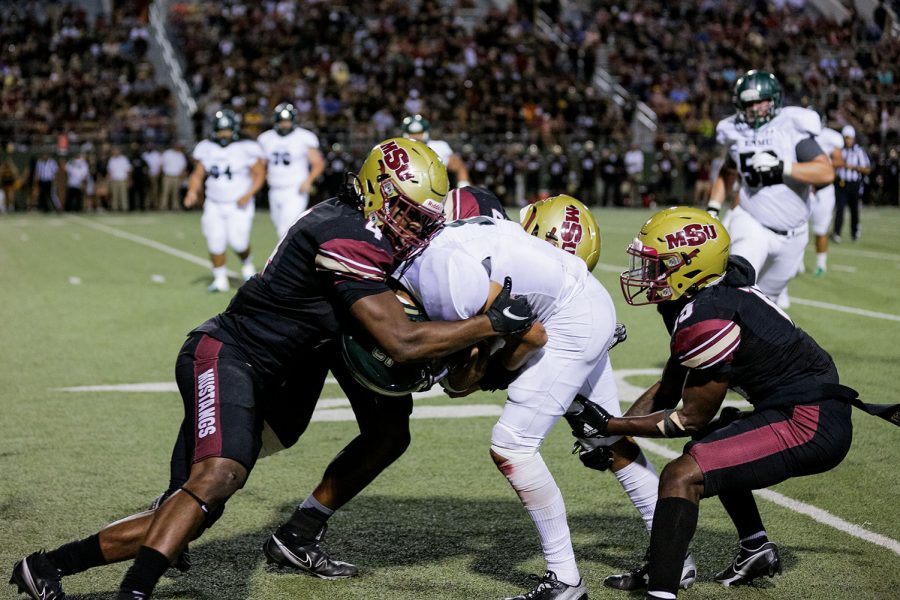