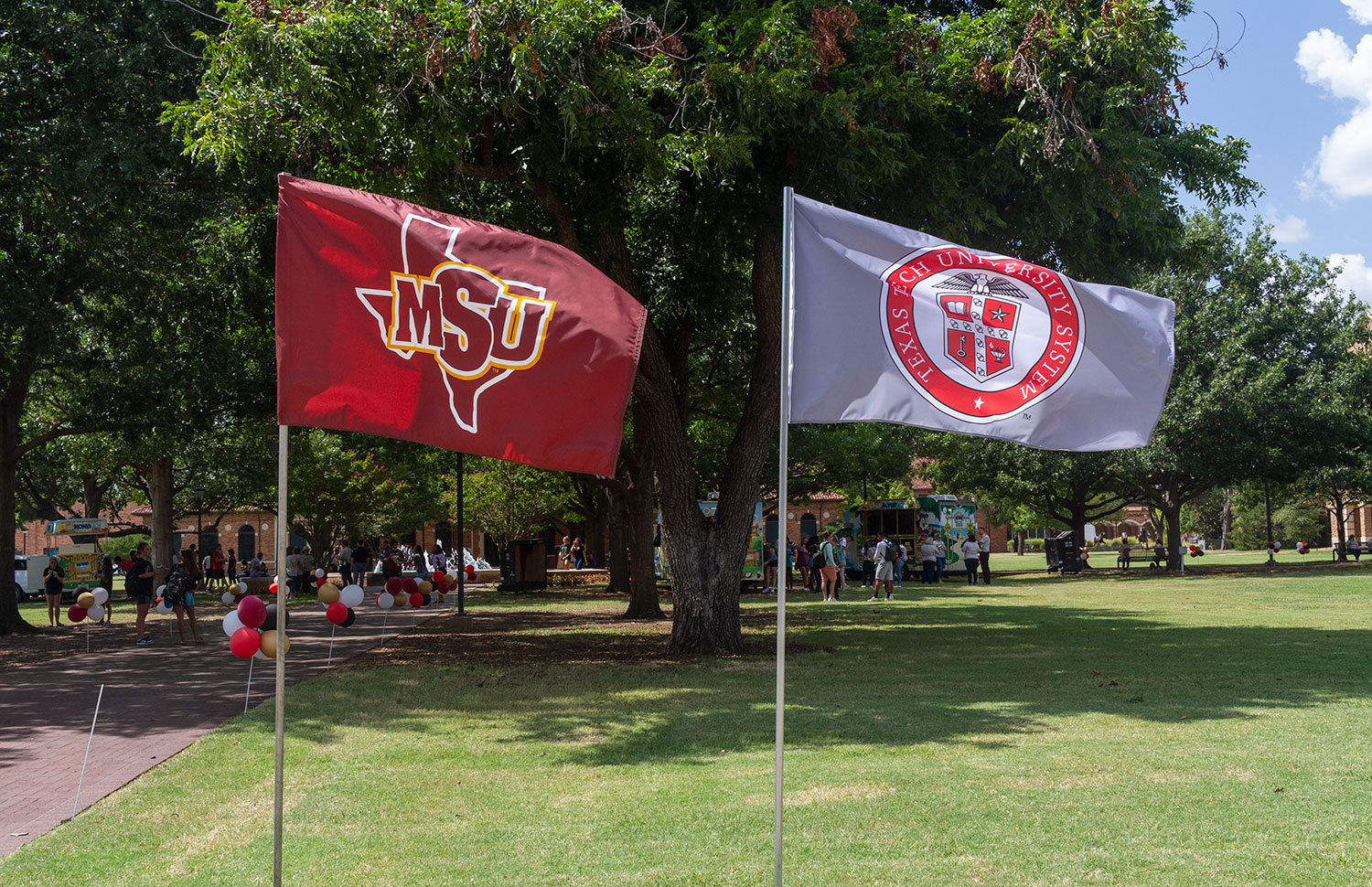 MSU students and faculty celebrate the university’s joining with the TTU system, Sep. 1.

Board of Regents meeting brings big changes to the university

On Wednesday, Sept. 1, 2021, the Texas Tech University System Board of Regents met on Midwestern State University’s campus to hold a ceremonial special meeting to officially welcome MSU as the newest member institution of their system.

“I think Midwestern State University has the perfect campus culture to fit in with this rest of the universities in our great system,” Jesse Mendez, MSU Texas Alumnus and current TTU Dean of the College of Education, said.

Texas House Bill 1522, which was authored by Representative James Frank and sponsored by Senator Drew Springer, is the legislation that transferred MSU into the TTU System. While it was signed in May, it didn’t officially go into effect until Sept. 1.

“The Texas Tech University system is extremely excited and proud to partner with MSU Texas… as we become stronger together, advancing higher education in our great state and beyond,” J. Michael Lewis, Chairman of the TTU System Board of Regents, said.

During the meeting, former President Suzanne Shipley spoke her final words before departing from campus. As a Texas Tech graduate and a guiding force of this merger, this process marks the magnum opus of her leadership.

“As you can imagine it’s a bittersweet day for all of us who have to say goodbye to the old ways and welcome in the new…. This is the proudest moment of my personal and professional life… as my past joins my present,” Shipley said.

Johnston received his bachelors and masters degrees from MSU. His employment with the university began in 2012 as interim dean of McGunn Health Sciences and Human Services. He became the permanent dean in February 2013 until his appointment as provost in 2017 and then was officially appointed as vice president of academic affairs in April 2017.

“[He] has been instrumental in a lot of the work that has been done to make this day possible,” Mitchell said.

To celebrate the university’s 100th birthday and usher in a new century of education, the Board of Regents ratified plans for various upgrades around the entire university. On Aug. 19th, MSU was notified that Moody’s Investor Service was placing the university under review. As of the morning of September 1, they upgraded MSU’s outstanding debt by two notches.

“Prior to joining [the TTU System]… Moody’s Rating of MSU’s outstanding debt was A1, they’re now double AA2, only one notch below the TTU System,” Gary Barnes, TTU’s Vice Chancellor and Chief Financial Officer, said.

Now, with an AA2 rating, it makes MSU’s outstanding debt considered high quality with very low credit risk. This was the highest rating MSU could have received.

Along with this, the board said it allows for more availability in the university’s bonds, tuition and fees, operating budget, maintaining employment status, tenure and funds. There were murmurs of plans of building a new football stadium, but no further information was shared.

In order to begin plans to upgrade, the Board has to review the budget for the next fiscal year. Overall support was reduced by $1.2 million, but the 87th Texas Legislature added $380 million of support across Texas to fund enrollment growth.

“In building our budget… for fiscal year 2021, we built it basically flat, declining enrollments. We also had it budgeted for reduced, cancelled, postponed activities, those we knew weren’t able to be had,”  Beth Reissenweber, MSU’s VP of Administration and Finance, said.

Based on an increase in tuition and fees along with a decreasing debt service cost, the budget for this next fiscal year is almost $124 million. Tuition and fees account for 40%, state appropriations for 24%, and gifts, grants and contracts for 19% of the budget. Reissenweber says they’re going to spend most of it on the people, with compensation costs covering almost half of the budget, scholarships using about 22% and maintenance and operations using 16%.

“For fiscal year 2022 however, we’re looking at modest enrollment growth and are cautiously budgeting for return to normal in terms of activities,” Reissenweber said.

For projects planned in the near future, Bolin Science hall additions and renovations are the number one priority. She also reported that the Daniel Building, the future Bridwell Activities Center, is hopeful to open in the spring semester of 2022.

Looking to the future

The MSU faculty put together a video to present to the TTU Board of Regents to capture the spirit of the university.

“As Mustangs with free spirits, each with our own character and style, we run together and work together as a team, representing strength, individuality and unity,” the video said.

MSU also put together various presentations to show the TTU Board of Regents the foundations and subsequent achievements of the university. Different faculty and staff members spoke to introduce MSU’s campus, departments and students.

“We launched our ambitious MSU Texas Boundless Opportunities comprehensive campaign in 2016 with the goal to raise $50 Million in the years leading up to our centennial celebration in 2022. The centerpiece for our campaign is simple: students,” the video said.

The goal was met only 29 months into the campaign, and in 2017 and 2018 MSU broke the institutional record for gifts and pledges received in a fiscal year at $32.8 million. Currently, MSU has collected over $75 million, with a year to go before the conclusion of the campaign.

“It is the generous spirit of our MSU Texas community that is evident in the gifts received today. Gifts include funding for scholarships, academic programming, faculty development support, technology and specialized software,” the video continued.

MSU is hopeful that the new placement within the TTU system will allow for new opportunities for students to grow and flourish.

“Most importantly, we are proud of our graduates because we know they go out and change the world,” Reagan Foster, Assistant Director of Athletics for Student Development and Outreach, said.