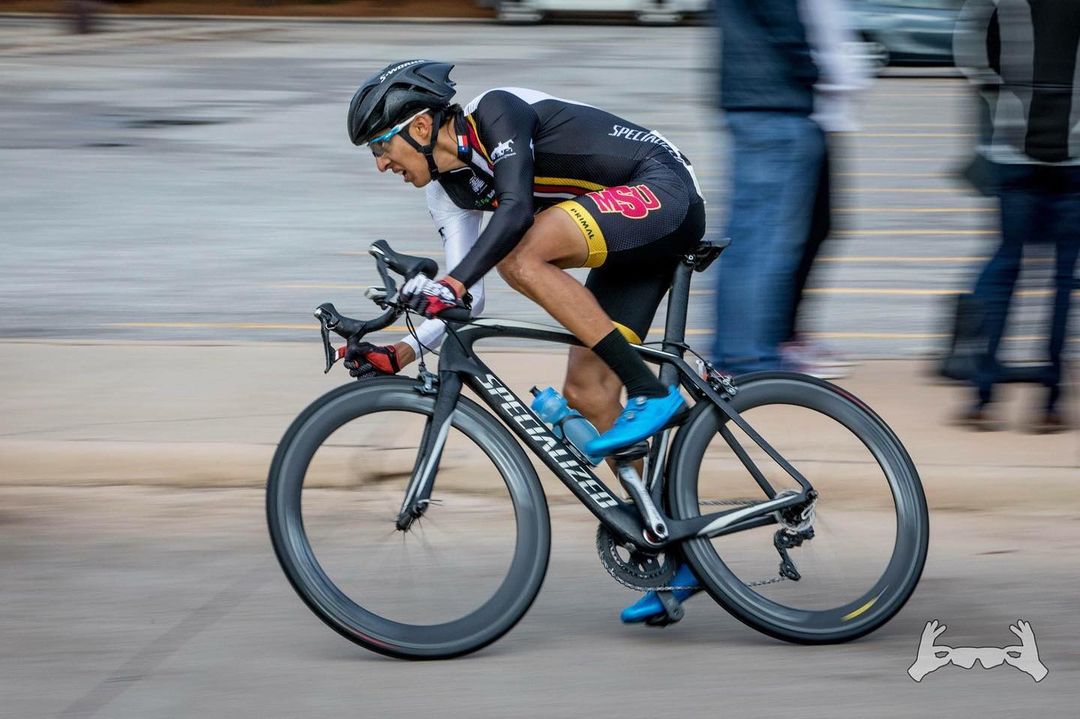 Pablo Cruz wears MSU colors as he speeds by, Oct 8, 2019. Courtesy of @the_club_atx on Instagram.

Pablo Cruz, exercise physiology graduate and MSU Texas cyclist, began his career of cycling back in his home country, Honduras. What started as a friendly competition among classmates six years ago has turned into a career and a pursuit of higher education.

“I started cycling with some friends from middle school that would invite me to go out riding with them. The first time I went, I remember telling them that the sport wasn’t for me – I thought it was too hard,” Cruz said. “Although I thought it was too difficult when you’re young and race against your friends, you want to become better, you want to beat them… that is when I started realizing how much I actually enjoyed it.”

Initially, Cruz’s parents were worried that cycling would be too dangerous for him. Being in Honduras, rights for cyclists are relatively nonexistent. However, Cruz said that to convince his parents that cycling was indeed good for him, he began competing in local races and coming home with medals.

“Once they saw me winning these competitions, my parents started to view cycling in a positive way for me. Once I graduated high school, there was a time period that I did cycling full-time. I was training over 25 hours a week, cycling was my life; that’s all I was doing…that is actually how I ended up meeting the coach at MSU and them offering me a scholarship,” Cruz said.

Similar to Cruz’s initial thought on cycling, he shared how he never was a good student in school and felt that education and college were not for him. His start at MSU did little to quell those initial concerns.

“I remember thinking, ‘University? No, that’s not for me.’ My mind was always focused on sports, sports and more sports. But once I told my parents about the opportunity, they told me to give it a chance,” Cruz said. “However, when I came here, my English wasn’t really good. My first few semesters were difficult; trying to study and understand what the professors were saying in class, I felt like I was having to study and try twice as hard as everyone else around me.”

Despite the challenging language barrier, due to the time and attention Cruz has put toward education, he started realizing his interests in exercise physiology.

“Once I graduate, what I would like to do with my degree is work in a performance center doing athletic tests to help people become better – that is what I’d like to do. I don’t think I’d go back to Honduras, especially with the degree I have. It’s not that there aren’t opportunities – they are just limited,” Cruz said.

Although he feels his future isn’t back in Honduras, Cruz still misses those he left when he came to MSU. Cruz said that being away from family entirely while in a different country can be very difficult and, at times, lonely.

“You know you’re all alone here, and your entire family is back home. You only have yourself and you see your friends being close with their family and realizing the only people you have, if any, are your friends. But what has helped me when I get lonely is focus and draw attention to why I am here – to complete my goals and progress in life. I also know that my family is proud of me being here in the U.S. having the opportunity to study and do what I love – cycling,” Cruz said.

When Cruz reflects on everything he’s accomplished here at MSU, he says he is most proud of the fact that he would’ve never imagined himself attending or completing such a high level of education. He is motivated by his father who passed just two years after Cruz arrived at MSU. Cruz said, when alive, his dad always told him to continue his education because sports can only take someone so far.

“Part of me feels like I’m doing what he always advised me to do. When you’re young, like how I was, it’s easy to only think and care about the sport, but like my dad would always say…it is important to have a plan B. Anything can happen when you play a sport; you’ll never know one day if you get injured then can never play again, because what will you do then? Education is the foundation of the future,” Cruz said.