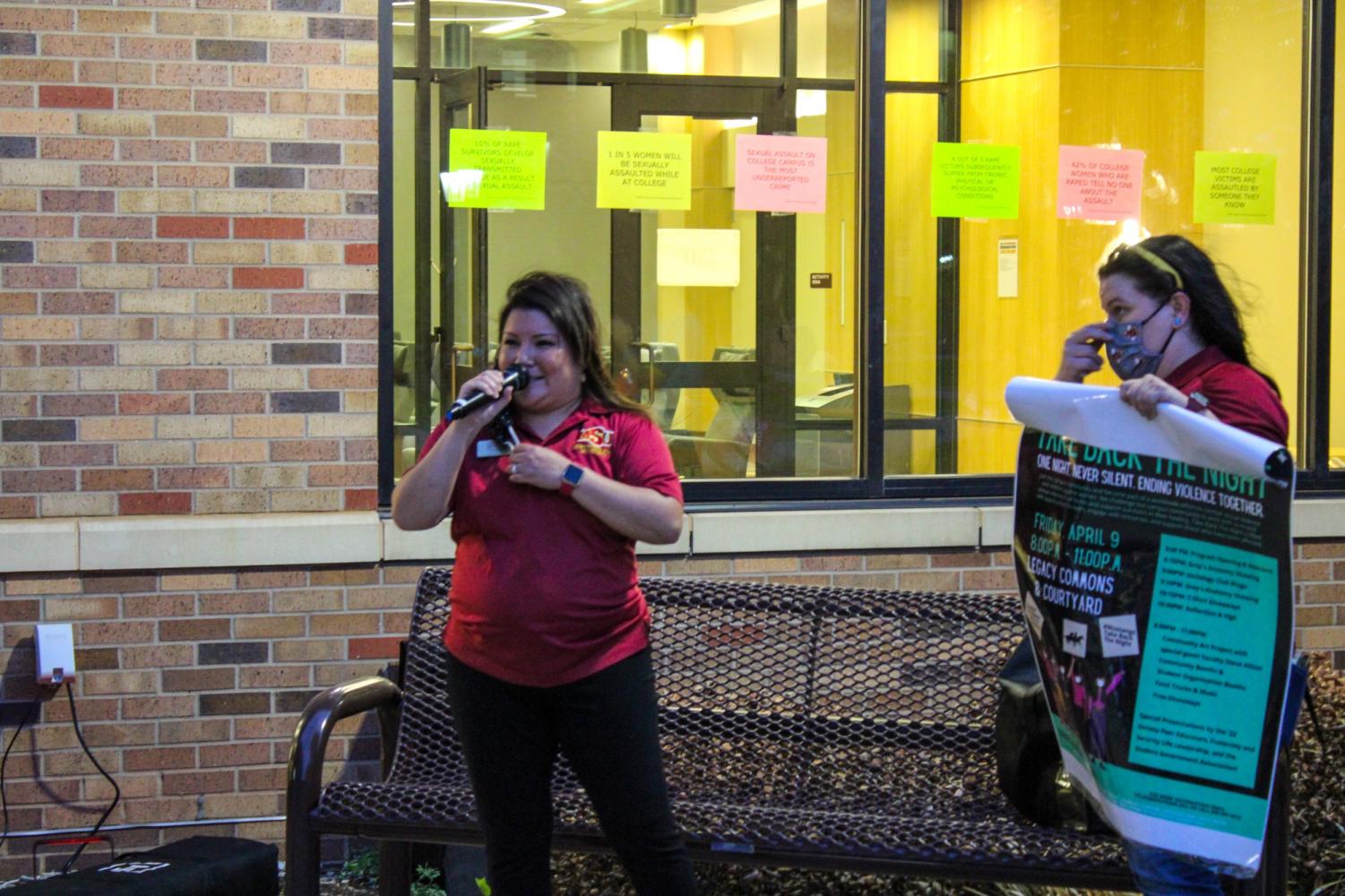 Director and Coordinator of Title IX, Laura Hetrick, addresses the attendees of Take Back the Night with more info about the event, April 9. (Bailey Graham)

Director and Coordinator of Title IX, Laura Hetrick, addresses the attendees of Take Back the Night with more info about the event, April 9.

Take back the night: educating the campus on sexual assault

In the university setting, 26.4% of female undergraduate students and 6.8% of male undergraduate students are raped or sexually assaulted, according to Rape, Abuse and Incest National Network. To highlight sexual assault awareness month, the office of Title IX, Residence Life and Housing, Violence Intervention and Prevention Peer Educators and the Sociology Club banded together to create a Take Back The Night event, which allowed students to interact with local resources available for survivors of sexual assault.

Meaning Behind Take Back The Night

Take Back The Night is a worldwide movement with the mission of standing against sexual violence. Take Back The Night events and marches began in the 1960s, and the name originated from the anxiety women felt and often still feel when walking down the street alone at night.

“Take Back The Night to me personally is taking back that power that was taken from you. Usually, with sexually assaulted individuals, they feel like you’ve taken so much from them that was out of their control. Taking back the night is regaining that power, understanding that you’re not alone. There’s a whole community behind you backing you,” Courtny Didier, MOSAIC Cross Culture Center peer educator and management senior, said.

People between the ages of 13 and 33 are most at risk for sexual assault. As many college students are in that age range, Michelle Turnbow, executive director of First Step, emphasized that students who are not comfortable with reporting sexual assault or seeking counseling on campus should feel encouraged to reach out to First Step for its free and confidential services provided for survivors of domestic violence and sexual assault.

“The more they do events like this, it makes me so proud. The more times that we get out and talk about it, and write articles, the more opportunity we have to say ‘You didn’t do anything wrong. It’s not your fault, and there are people here you can talk to,’” Turnbow said. “When we think about how much better we are today than we were 100 years ago, or 50 years ago, I just say it’s because we do things like this. We keep evolving. We keep talking about it and pushing things to get better.”

Sexual assault is underreported. Survivors often suffer in silence because they feel as though what transpired was their fault or are not sure if the assault happened.

“No matter what you were doing, you didn’t deserve that… It is something that will change who you are if you do not go get help. You need to talk with someone so that you know you’re not alone. Something was taken from you when you were sexually assaulted, and until you work through that, they’ll still have that hold,” Turnbow said.

Sexual Assault Nurse Examiner or SANE examinations completed in a hospital following an assault give victims the opportunity to report the incident to the police, but they are under no obligation to do so. Hetrick said students do not have to provide proof of a SANE exam to receive support from Title IX. Possible accommodations Title IX gives for sexual assault victims include a change in university housing rooms, exam or assignment extensions, temporary withdrawal and substitute course completion options.

“Unlike other crimes, people tend to blame themselves or second guess what happened or to try to figure out what they could’ve done differently when in reality, it’s not their fault. It doesn’t really matter if they had gone left instead of right. They’re not to blame. They didn’t do anything wrong, and I think there is just so much shame associated with it that people tend to not talk about it or be hesitant to report,” Hetrick said.

Title IX’s policy states that a student reporting an instance of sexual misconduct will not be penalized for illegal consumption of alcohol or drugs. The office only investigates the sexual assault case at hand.

“I don’t think it’s reasonable to ask students to never drink. I think we need to look at it more like how do you drink safely. If you go to a party, you leave with the people you came with. You don’t leave someone there to fend for themselves. What we hear a lot of times from people, not so much directly here, but in more high profile cases is, ‘Oh yeah, I don’t even know how they walked out.’ That’s not to the point where you can give any kind of consent. No one should be doing anything to you at that point except making sure you’re safe,” Hetrick said.

Although there is no sure way to prevent sexual assault, David Wilk, campus police officer, also recommended prioritizing safety on a night out.

“Have someone with you who isn’t [drunk], a DD or a friend that isn’t drinking, to be aware of you, to make sure to look out for you,” Monique Cervantes, Violence Intervention and Prevention peer educator and psychology junior said.

Cervantes said to her, the words “Take Back The Night” are a form of justice. Cervantes, along with other students, spoke on the importance of understanding what consent means.

“Just because we don’t give verbal consent, that doesn’t give somebody the right to make that decision for us. Consent means asking and getting it and not just assuming that it’s yours,” April Kaufman, president of the sociology club and sociology senior, said.

Consent can be defined as a continual conversation between partners about their boundaries. Just because a partner has consent for one sexual act, does not mean they should assume they have consent for another.

“It’s important to understand that you have a right to say no, even in the act of doing something, if you feel like you don’t want to go through with it, that’s your right. Them being aware of that lets them know that they have power to make decisions,” Didier said

Turnbow said it is important to educate our youth, and our society in general, on the meaning of consent so that people know what unhealthy behavior consists of.

“I raised a daughter, and I raised a son. There’s a difference in the ‘boys will be boys’ concept. We have to educate our youth. Some people don’t even realize that they were sexually assaulted. I sit down and talk to so many people as adults who said, ‘Wow that was sexual assault,’ because we weren’t talking about it 20 years ago, people don’t know consent,” Turnbow said.

The number of people who are raped at some point in their lives is nearly one in five for women and one in 71 for men. Male college students are five times more likely than non-student males aged 18 to 24 to be raped or sexually assaulted. Female college students between the ages of 18 and 24 are three times more likely to experience sexual violence than women in general.

“Diversity isn’t just about race. It’s also gender issues, so whenever there is an issue in the environment such as sexual assault for women, then we would like to bring awareness in order to find solutions as to how to stop it as well as to make people appreciate and be more empathetic towards those situations,” Didier said.

“Our part that we play in MOSAIC is bringing awareness to the Black transgender individuals who have been either assaulted or killed and murdered during the past year. This has been an issue especially recently,” Didier said.  “We just wanted to bring awareness to this because in our MSU community there are individuals who may be transgender, so it affects them. Because MOSAIC is about diversity and inclusion, we want to ensure that we touch all the bases of our community here.”