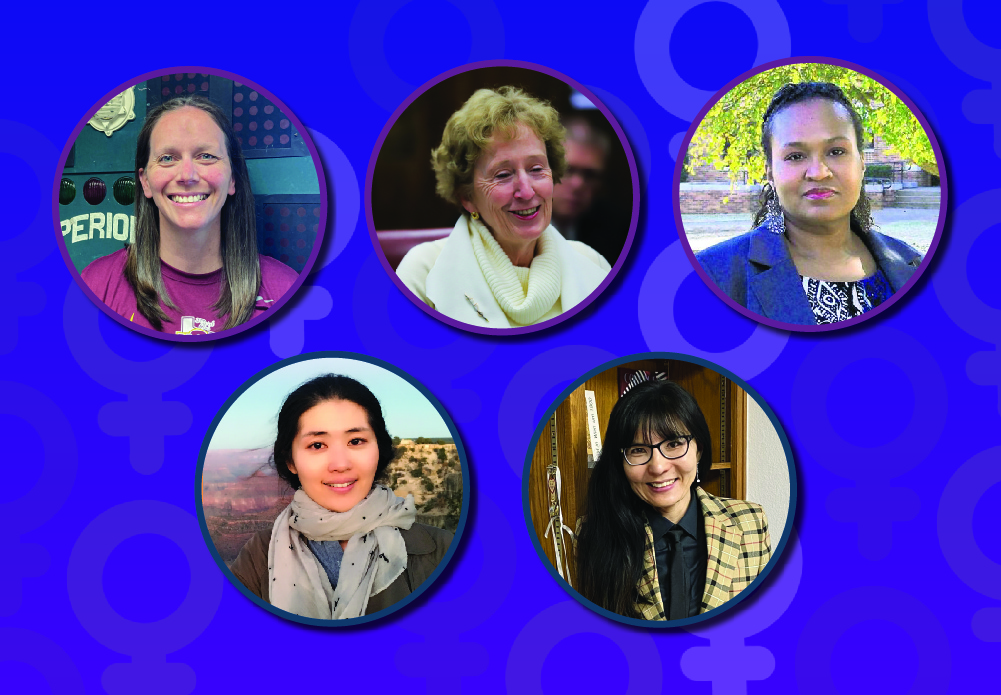 Receiving an athletic scholarship playing basketball for MSU Texas, Reay graduated with a Bachelor of Science in Interdisciplinary Studies, earned her master’s in education and is now pursuing her EdD in educational leadership.

At MSU for over a decade, Reay has worn many hats. Currently, she holds the titles of: Camps and Conference Coordinator, Cheerleading Administrator, CPR/AED/First Aid Instructor, Adjunct Instructor: West College Education and Reay’s office oversees the Youth Protection Program; as well as serving as the Staff Senate Vice Chair, Budget Oversight Committee, Return to Campus Task Force, Employee Health and Wellness Committee-Chair, Title IX Investigator and Centennial Steering Committee. Hesitant but confident in applying for the position, Reay was named Director of the Bruce and Graciela Redwine Student Wellness Center in April 2017.

“I think one of the things that worked to my advantage was my dedication and work ethic before this job,” Reay said.

Reay’s advice for young women is to become experts in whatever it is they are trying to pursue and to showcase a strong work ethic. She also said having support from her husband, children and friends were helpful in her journey.

“Know your field. Be very knowledgeable in the area you’re trying to pursue. We all like things, but you need to be very knowledgeable. Regardless of your gender or ethnicity, [succeeding] takes a lot of work. It takes doing a lot of things you might not want to do. Discipline is another thing; you have to be disciplined enough to come to work and be successful,” Reay said.

“Ogilvy is a global agency, headquarter is in New York. We communicated with all people in the world….My main client was Nike,” Cho said. “Airmax 360 was released in 2005, we had to make the same theme…same campaign, but different countries develop different ideas.”

After four years Cho went on to pursue post-graduate education. Cho received her master’s in advertising from UT Austin and earned her Ph.D. from the University of Wisconsin-Madison and chose to pursue a career in academia.

“If I go to academia, that is totally different story. I can still study, doing research about advertising, and I can meet students to develop advertising campaigns. I can do more in the universities,” Cho said.

Cho began working at MSU in the fall of 2019. She was confident in this decision because she enjoys her teaching and can do research. Cho researches advertising with children and how they process it. She advises students to talk about their interests and make connections with professors.

“Try to think about what you want to do and also talk with your professors. Discuss your career. It really helps,” Cho said.

Shipley received her bachelor’s in German and English and pursued her master’s and Ph.D. in German.

“I got my master’s in five years, had a Fullbright [scholarship] to Germany and then went to UT [University of Texas] for my doctorate in German,” Shipley said.

Shipley began her college teaching career at 30-years-old at the Univerity of Cincinnati. She was one of 20 women nominated to be a part of the American Council on Education Fellowship, a national leadership program for women who aspire to be university presidents.

Before arriving at MSU Texas in August of 2015, Shipley was President of Sheppard University in West Virginia for eight years. She chalks her successes up to looking at herself in other ways than what society teaches women are.

“We’re perfectly comfortable looking at ourselves as a daughter, an aunt, a mother, a sister, but what about CEO? What about entrepreneur? What about engineer? We’ve got to make room for titles that society didn’t ok decades ago,” Shipley said. “We’ve got to step into titles that society has now said it’s ok for women but it’s not habituated at all. I think recognizing how you want to define yourself is one of the most important steps.”

Shipley is a strong advocate for manifesting the job you aspire to have and not giving up when expectations are not met.

You have to believe in your core that you’re meant to do this and you will ultimately do it,” Shipley said. “But you can’t give up easily just because people don’t think you look like the job you’re applying for…It is really hard when you are a successful person, to fail.”

Lee was born in South Korea. At 7-years-old she moved to Wiesbaden, Germany after an opportunity arose for her parents to be guest workers.  She left Germany at the age of 18 to study in the United States and pursue a degree in German at the University of Arizona. There, Gagum completed her undergrad, graduate and Ph.D.

“Long story short, I came to study and ended up getting married and stayed in the states. My husband was in the military and stationed at the David-Monthan base in Arizona, so it was convenient for me to go there. It was an interesting experience because I was not a traditional student. At the time I already had children, so I had to balance being a student, a wife and a mother. It was challenging,” Lee said.

Lee said that she has been inspired by Asian female authors who involved the German language in their careers, such as Yoko Tawada.

She inspired me in the sense that although German is not her native language, the way she plays with the language and enjoys writing in the language, made her writing really special. Since she is Asian, and learning a European language, I feel like I can relate to her and aim more toward my goal to share the love and passion of the language,” Lee said.

“Let’s start with the body. That is something that you can take care of immediately. Set goals, short-term goals, then set long-term goals and establish how you are going to get there and why. The answer to the ‘why’ should always be, for yourself,” Lee said.

Dean graduated from the University of Iowa in 1995 with a bachelor’s of science in sociology and she completed her master’s degree in education in training and development when she arrived at MSU. Throughout her college career as she kept encountering people that had positive impacts on her college experience. Through them, she realized that was the career she wanted to pursue.

“Having sort of decided ‘Yeah I would like to help other people make it through this experience,’ I also landed on the people that I want to help are first-gen students, minority students, international students, students who want to engage in that cross-cultural experience. It was a really powerful piece of my education and so having decided maybe this is the path for me I knew this was the place within higher ed that I wanted to be,” Dean said.

Dean was hired as the director of multicultural services at Clark University in 1997. In 2006, she was promoted to director of student life. In 2009 Dean transitioned to MSU and served as Assistant Director of Student Development and Orientation. Dean is now the Director of the Priddy Scholars program, Mosaic Cross-Cultural Center and in August 2020, added Assistant Vice President for Student Affairs to her titles.

During Dean’s academic life she had Esther Materón-Arum, her advisor who kept her on track to keeping her goals. Now Dean can advise other students in the same way.

“Advice that I most often give to young women in the workforce is to be strategic in whatever position [they] are in…It’s always about thinking of [the] next step and beginning to prepare for that,” Dean said.