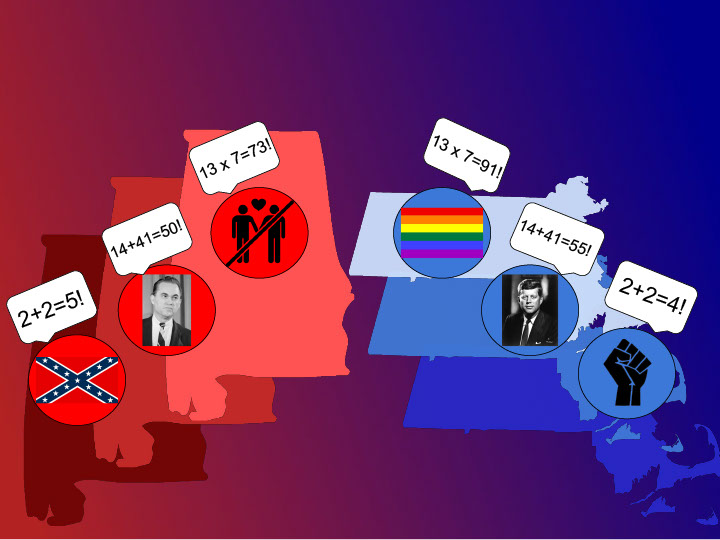 Opinion: How to predict your side of history

Massachusetts was one of the first states to outlaw slavery, one of the first to ratify women’s suffrage and the first to legalize gay marriage.  In addition, John F. Kennedy, who helped draft the Civil Rights Act of 1964, was a Senator from Massachusetts before being elected president.  Other states have great track records, however, it’s clear that, at every bend towards justice, Massachusetts was one of the first states to lead the way.  Inversely, despite other states having abysmal track records, Alabama was one of the states to lead the fights against equality.   The Constitutional Convention for the Confederacy was held in Birmingham, Alabama.  The state government killed other Americans in a desperate protest against abolition.  The state government rejected women’s suffrage in 1919.  None of Alabama’s Senators or Representatives voted for the Civil Rights Act of 1964.  The former Governor of Alabama, George Wallace, proudly ran for president on a “segregation forever” platform in 1968.  It’s also hard to imagine Alabama ever legalizing gay marriage without the Supreme Court’s intervention.  Needless to say, Alabama is historically terrible at being on the side of justice while Massachusetts is historically successful.

This isn’t to dismiss any needed discussions on modern-day issues.  We shouldn’t just cheat off the Einstein of the class to get a good grade, nor should we agree with everything Massachusetts has decided.  You should still think, question and debate.  Ask the same questions you would ask if your answers clashed with the student who always gets an ‘A’ in the class.  If state governments, historically notorious for their oppressive stances, just so happen to agree with your conclusions to moral and legal dilemmas, you should question why your conclusions are similar to the state who always gets the answers wrong.

There are times where these two states agree on certain issues, either now or in the past.  If Massachusetts had a vote on gay marriage in the 1800s, their electorate would oppose the measure, but Alabama would concur.  In the same light, Alabama eventually ratified women’s suffrage in 1953, but Massachusetts was already ahead of the curve.  The distinctions lie where the two states diverge.  Whenever Alabama and Massachusetts disagree on an issue, Massachusetts is always ahead of its time.  If someone finds themselves agreeing with Alabama’s state government and disagreeing with Massachusetts’, why should they be so confident that the dynamic, which has existed for two centuries, is now obsolete? There’s good reason to believe that the two sides of history are still at work.  When engaging with our present moral dilemmas, analyzing the bellwethers of historical progress can predict how future generations will grade our answers.