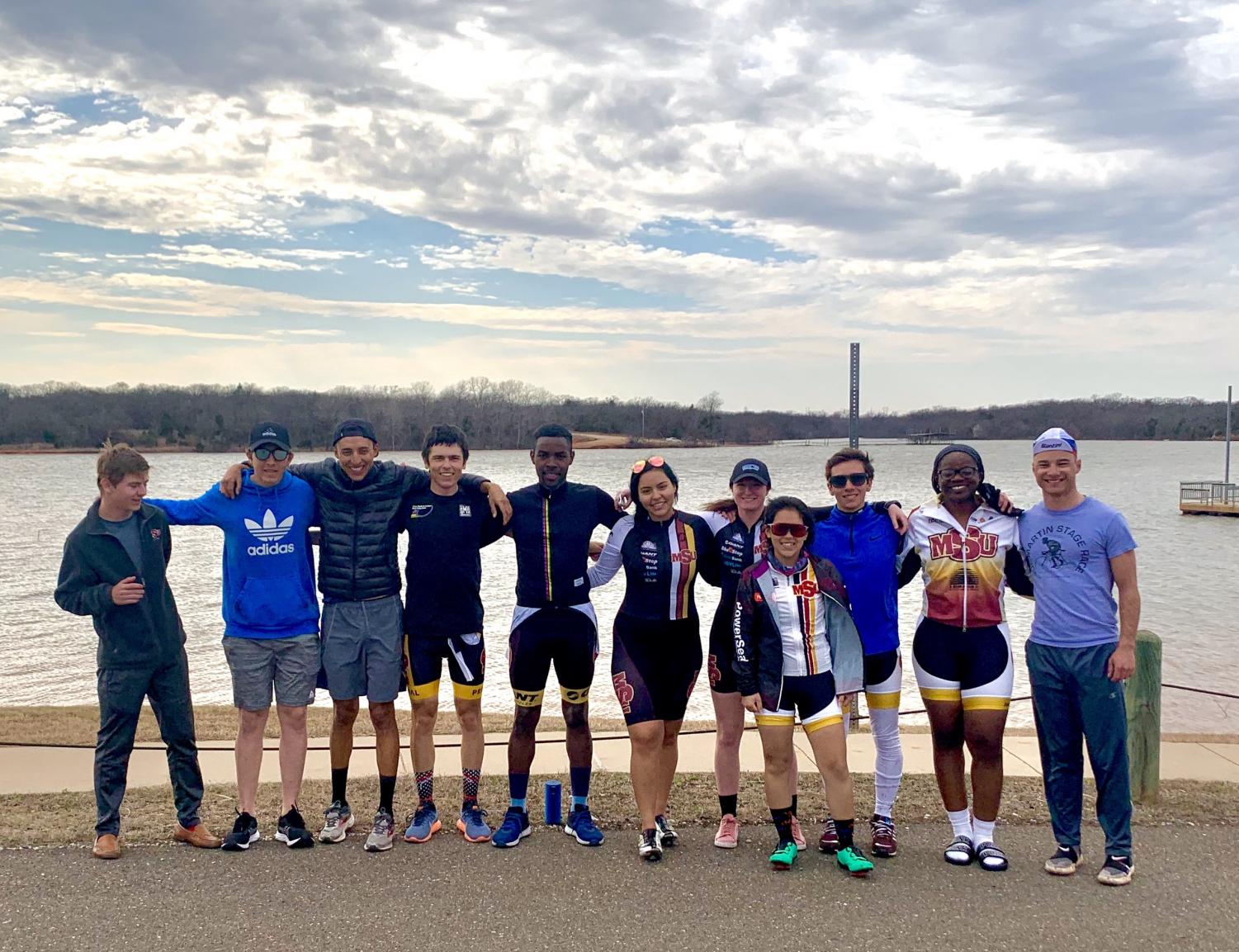 MSU cycling team poses for a photo after day 1 of the OU racing weekend. March 7. (Photo provided by MSU Cycling)

MSU cycling team poses for a photo after day 1 of the OU racing weekend. March 7.

COVID-19 has shut down stores, restaurants, gyms and sports seasons, but it didn’t shut down Cycling Head Coach Charlie Zamastil’s heart to help out the community in this time of need.

Zamastil and his team decided to stay in town to continue their off-season training and incorporate a carrier service within those sessions. The team has delivered food, letters and even groceries to Wichita Falls residents who don’t feel safe leaving the shelter of their home to retrieve the items themselves.

“Essentially we wanted to incorporate training solely in town with trying to do good for the elderly and at-risk population we have here,” Zamastil said.

Zamastil got the idea from when he used to bike around while living in Philadelphia during graduate school. Biking back and forth to various everyday locations gave him the idea that the cyclists on his team could do the same for other people.

“I didn’t have a car until I moved here, and I definitely didn’t live close enough to walk anywhere in a big city. I biked to class and biked to work,” Zamastil said.

The cyclists deliver and retrieve a wide variety of items with only their bike and a backpack. Whether it’s something as pivotal as retrieving medicine or as trivial as fetching a bottle of beer, the cyclists are willing to help out the community.

“We’ll come and get whatever they want. Whether it’s giving us money and going to the restaurant and coming back to deliver the food, picking up a letter or running out to go get some beer,” Zamastil said.

Due to the NCAA shutdown, the cycling season was cut short with only two more tournaments left until the national championship in Wichita Falls.

“It sucks. I  think we had a tremendous team this year. They ended the season while we had just retaken the conference lead so we ended up being declared conference champions, but that seems a little hollow since all the racing wasn’t done,” Zamastil said.

The shortened season cuts extra deep due to the success the team was having, both on an individual and team level.

“We had a lot of individual winners plus the team overall win, which has come to be expected for us, but at the same time it’s like it feels incomplete,” Zamastil said.

The team shifts their training to the off-season in hopes of being competitive next season. The uncertainty of when that next season will arrive has lead to uneasiness for both Zamastil and his team.

“We have work to do, but it feels like what is the work going to be for. Am I going to be burnt out and all of a sudden start competing or am I going to be in great shape [with] nothing to be competing for? The uncertainty is very hard,” Zamastil said

The team keeps their head high in waiting for the next tournament, but they continue to lift up the community with good deeds in the meantime.

To get in touch with the carriers, email your delivery inquiries at [email protected]