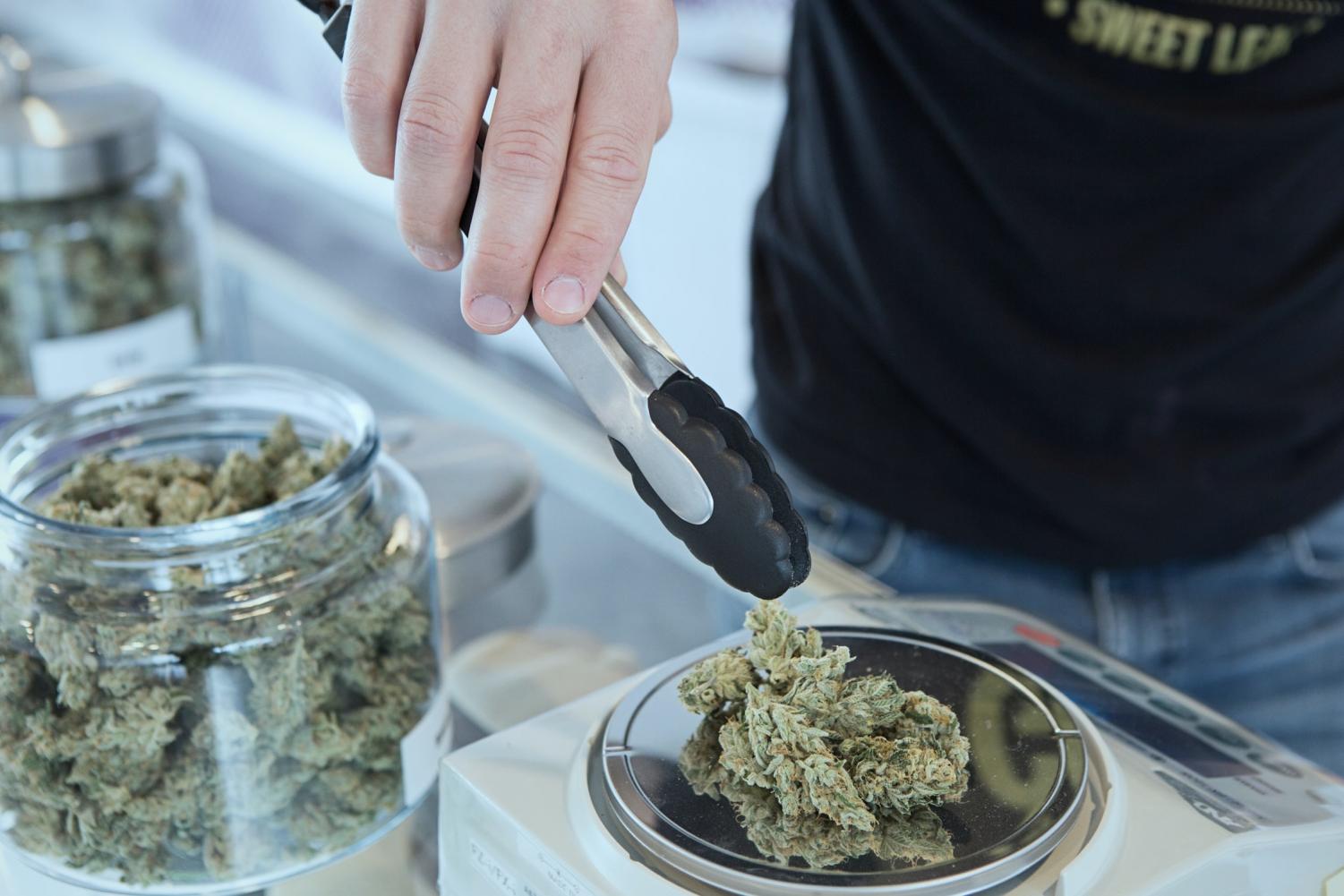 “Neither the marijuana user nor the drug itself can be said to constitute a danger to public safety.” – Richard Nixon

With numerous shelter-in-place laws, states across the US are grappling with what is essential in that part of the world. Connecticut has limited social gatherings to five people. Florida closed its beaches. Texas has allowed alcohol deliveries from restaurants. Colorado and eight other states deemed marijuana dispensaries essential for recreational use. Another 22 states classify marijuana for medical use is essential.

Naming marijuana dispensaries as essential has sparked discussion on whether or not it is fair for a person convicted of cannabis possession to be sitting in jail in one state while another state is employing people to sell and distribute the very same drug.

For now, in Texas, possession of 2 ounces or less of cannabis over the THC content of 0.3% is a Class B misdemeanor and it could land you in jail for up to 180 days and/or a fine of up to $2,000, along with a non-expungable criminal record. In the Texas Crime Report for 2018, the number of arrests for drug possession was just under 126,000. Half of drug-related arrests were for possession of cannabis Sativa.

In 2019, Texas accidentally (kind of) decriminalized the plant by changing the legal definition of marijuana to “cannabis with less than 0.3% of concentrated THC,” (the psychoactive element that provides the high) for the sake of legalizing marijuana’s sister – CBD – which does not carry THC. The marijuana flower and the CBD flower are similar in appearance and smell which makes differentiating the two a near-impossible task unless tested in a lab. To accurately prosecute cannabis users or distributors, Texas labs will require new, expensive testing equipment (costing up to $500,000 per machine). The State of Texas does not have this equipment according to Director of Governmental Relations for the Texas District and County Attorneys Association, Shannon Edmonds. “Evidence can come only from a laboratory capable of determining that type of potency – a category which apparently excludes most, if not all, of the crime labs in Texas right now,” Edmonds said (May 2019).

Before we continue, it’s important to know:

With that, we turn to the common pros and cons of decriminalizing cannabis: 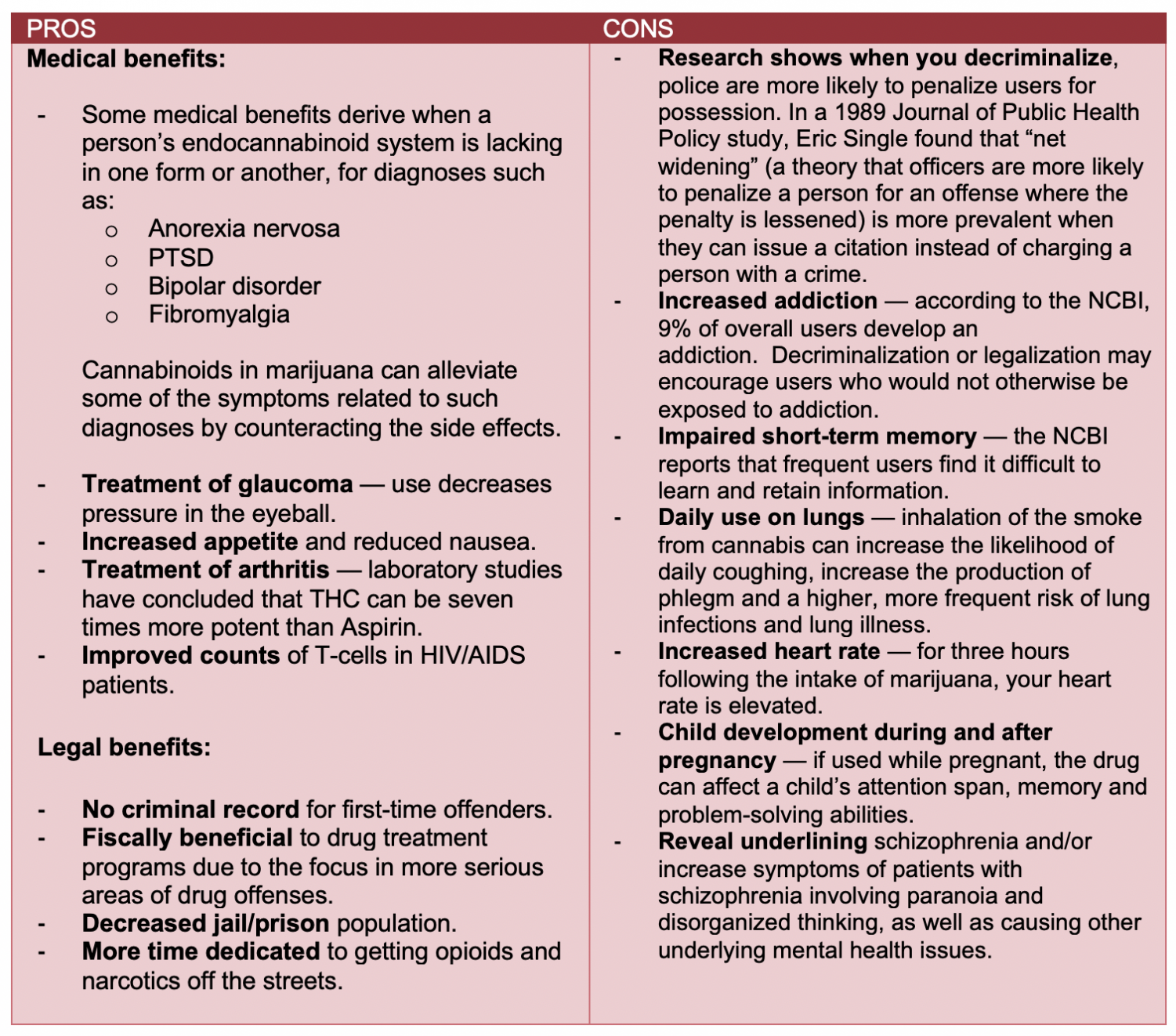 With this list in mind, trying to compare states and their cannabis laws is difficult. Texas, by population, sits second on the list. The closest in size, based on cannabis leniency is New York or California. For the sake of being in a conservative state, New York and California statutes for the drug are a little too liberal for 21st century Texas; however, Maine is a reasonable conservative comparison.

Maine decriminalized the use of cannabis in November 2016. Possession of 2.5 ounces or less, or paraphernalia has no incarceration time and no maximum fine. Cultivation of up to three flowering plants is allowed and the use of cannabis is only permitted in a private residence or on private property. Sales and distribution are illegal (although COVID-19 put a pause on the next legislative session which would see a suggested legalized, government-taxed market), and carries a maximum fine of $2,000 and/or a maximum sentence of one year.

The Maine Drug and Liquor Violations Crime Report of 2017 (after cannabis was decriminalized) cited a 37.4% decrease in drug arrests from the 5,411 arrests made in 2016. From 2015 to 2017, Maine saw a decrease of 71% arrests, saving (on the basis of ACLU calculations ACLU that it costs $4,300 to arrest a person for cannabis possession) $8 million. If Texas had a 71% decrease of its 2015-2017 marijuana arrests, 42,660 Texans would have avoided arrest, and the State would have saved $187.2 million. Money that could go to education, finishing the I-35, criminal reform and saving those going down the road of addiction.

By comparison, in 2019, the number one drug threat for Texas was methamphetamines, which killed around 1,000 Texans the previous year. However, only 22% of arrests for possession were made. To add to this crisis, surveys from the Substance Abuse and Mental Health Services Administration found on average 120,000 Texans in the age group of 12+ have used methamphetamine in the years of 2016 and 2017, and there’s a whole other story for the 58,000 Texans arrested for alcohol abuse. After decriminalization, Maine saw a 28% drop in arrests for opium, cocaine and derivatives, along with a decrease in drug overdose deaths for 2018. It is unclear as to whether or not this is correlation or causation; however, Maine addiction centers have reported an increase in some drug addiction admissions to programs treating substance use disorders since the decriminalization. Instead of arresting and fining cannabis users, wouldn’t it be a better idea to focus on methamphetamine users and put more effort into their rehabilitation?

While the idea of decriminalizing marijuana is attractive, it is not an easy task, nor should it be. In the next 10 years, Texas legislators have an enormous mission ahead of them. The use of this plant can stay on a person’s record for life; keeping a conservative state happy is one thing, but saving a Texan’s job security and their ability to apply for housing or academic scholarships are important social benefits to be weighed in the mix.

If nothing has convinced you thus far, Oklahoma has already legalized cannabis for medicinal purposes. When the south moves without you, you are moving too slow. Texans are not slow, just cautious — let’s not allow Oklahoma to replace us on the map.

None of these statistics take account of race or ethnicity. It would require the space of this entire newspaper to detail the effect that not decriminalizing marijuana has had on communities of color. The evidence is in every state crime report: people of color are four times more likely than whites to be arrested for possession of marijuana. So, I leave you with this question: why should people be arrested for an offense related to cannabis, while the same substance, when dressed up as culturally appropriated dreadlocks in a jean jacket behind a glass case, is an essential business in another state?

One Response to “Time to decriminalize?”