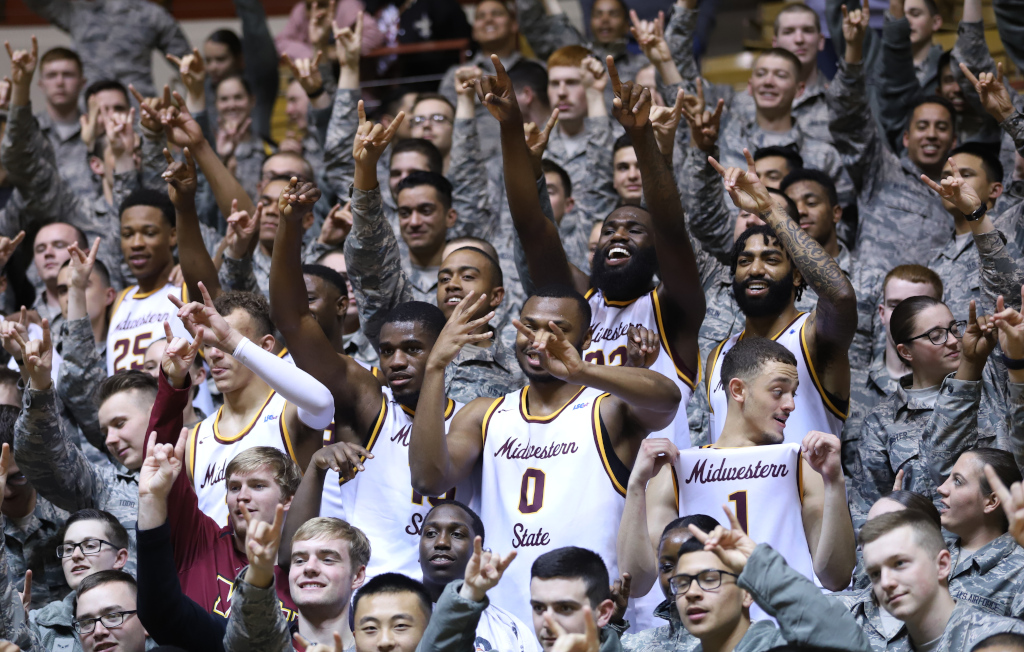 In an emotional season in which head coach Noel Johnson had to step away to battle ovarian cancer, the women’s team went 11-16 overall and 8-7 at home in the Dome. One highlight of the season was the Mustangs’ 84-77 second-half comeback over Cameron University in the first Red River Rivalry game.

Mica Schneider (No. 4), guard and business finance senior, came on strong in the last half of the season and averaged a team-high 12.6 points-per-game and 3.7 assists-per-game to go along with her 53 3-pointers. Hannah Reynolds (No. 11), forward and health science junior, lead the defensive effort in the paint, averaging a team-best 1.4 blocks-per-game. A freshman standout on the team was Mandy Withey (No. 23), forward and elementary education freshman, who put up 3.1 points-per-game, three rebounds-per-game and .6 blocks-per-game in just under nine minutes-per-game. 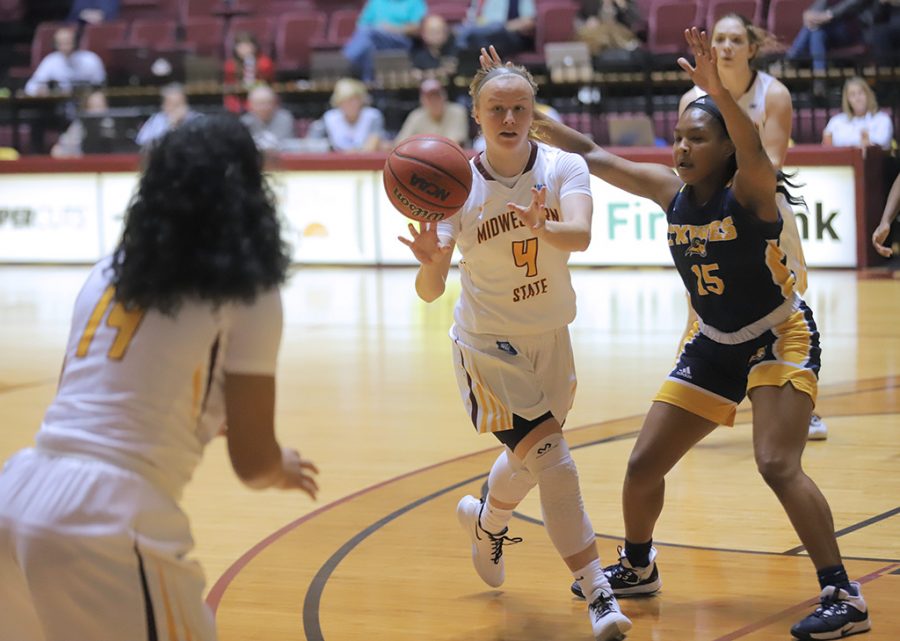 A couple of Mustangs moved up the career records books this season. Schneider’s career 105 3-pointers made ranks 13th and her 256 attempts ranks 11th. Reynolds continued to set the blocks leaderboard on fire, finishing the season within five blocks of becoming the new career blocks leader. She also had her third season in which she finished in the top-15 for blocks-per-game in a season. Elizabeth Cathcart (No. 43), forward and marketing senior, finished her career ninth in blocks-per-game with .4, tied for 14th in offensive rebounds-per-game with 1.5 and 12th in free throw percentage with .725%. 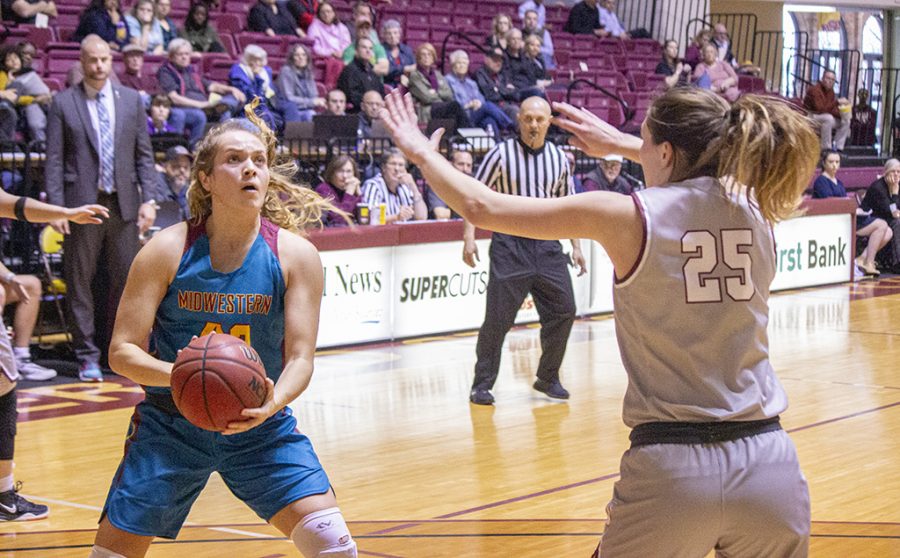 The women’s season came to an end with an 81-70 loss to Angelo State University in the opening round of the Lone Star Conference PostseasonTournament. The Mustangs hung tight with the opposition through the first half before conceding 48 second half points, including 26 points in the paint. Reynolds and Schneider scored 15 and 14 respectively to try and keep their side afloat.

After starting the season 4-19, the men’s team finished the season strong, going 4-1 in their last five regular season games and earning a spot in the Lone Star Conference Tournament. The highlight of the ‘Stangs’ season was the 69-68 victory over West Texas A&M which secured them the postseason spot.

D’monta Harris (No. 13), guard and applied arts and sciences senior, lead the team on the offensive side, averaging a team-leading 16.1 points-per-game, six rebounds-per-game and 78 made 3-pointers. Along with averaging 14.2 points-per-game of his own, Darius Thompson (No. 3), guard and mass communication senior, recorded team-high totals of 29 steals and 20 blocks on the defensive side of the ball. Evan McCarthy (No. 23), guard and undecided freshman, was a standout newcomer for the team, averaging six points-per-game in just under 17 minutes-per-game. 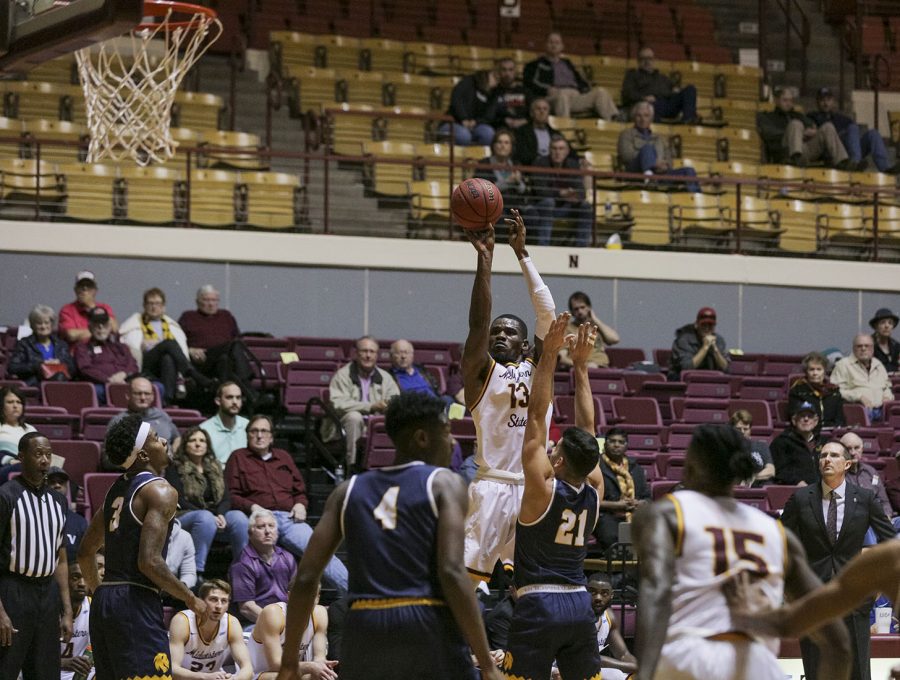 In its first season under the leadership of head coach Justin Leslie, the team changed its offensive style to be more aggressive from beyond the 3-point line. The Mustangs shot 159 more 3-pointers than the year before despite taking less shots overall. Harris headlined the 3-point revolution by making the 13th most 3-pointers in a season and attempting the sixth most 3-pointers in a season in Mustangs history. Trae Jones (No. 2), guard and business sophomore, now stands at 15th in 3-pointers attempted with 301. He has made .332 of those shots. 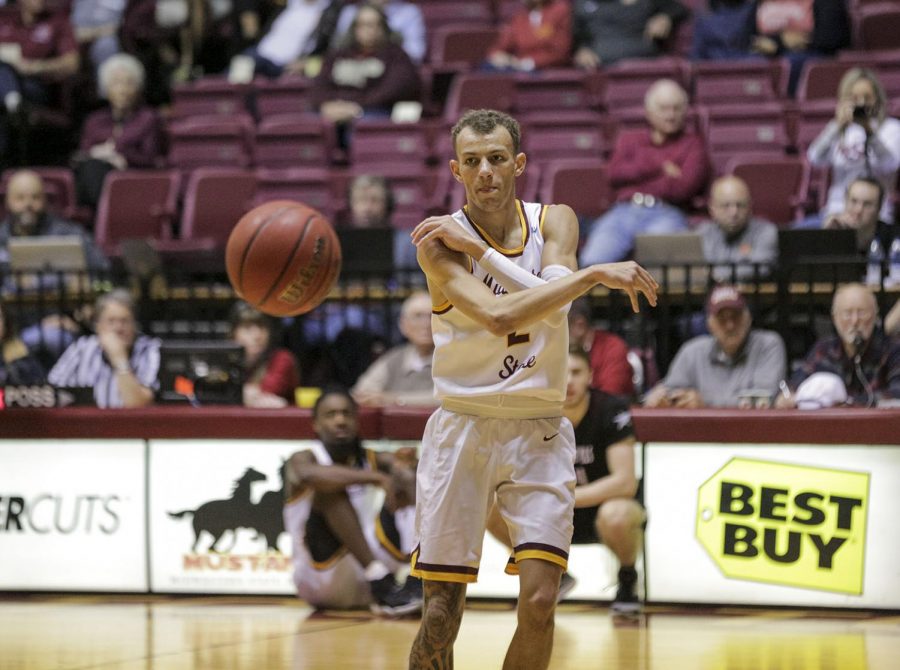 The men’s season came to an end in the first round of the postseason tournament with a 79-61 loss to Lubbock Christian University. The Mustangs outscored their opponents in the paint, but their 17 turnovers directly led to 22 points for the Chaparrals. Elijah Lee (No. 1), guard and mass communication senior, scored six points and dished out eight assists in the losing effort.

Due to their impressive seasons, Harris was selected to the All-Conference Third Team, and Thompson was selected as an honorable mention. 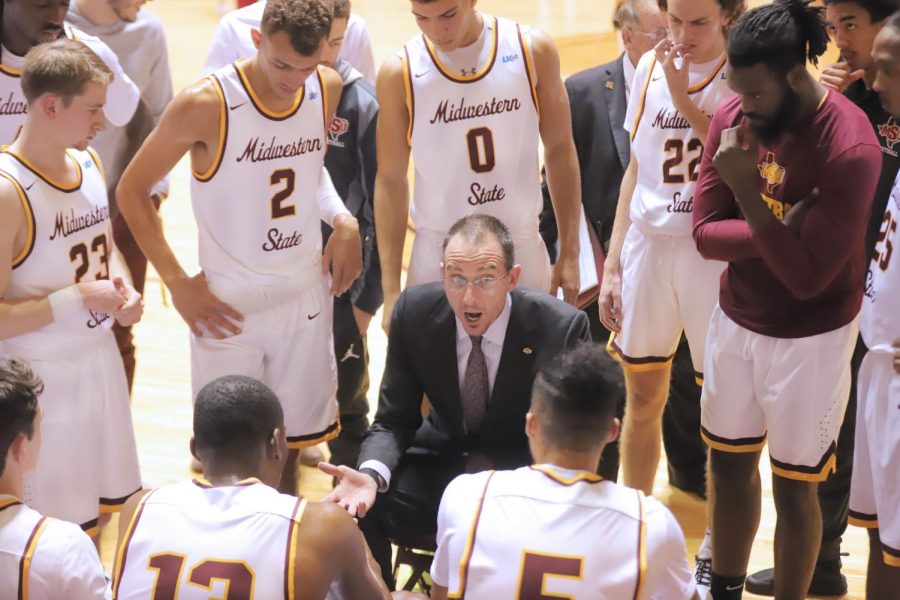 Gallery|9 Photos
Men's basketball huddle around listening intently to head coach Justin Leslie express his frustration at the referee's decisions in the second half of play against West Texas A&M, Nov. 14. Photo by Bridget Reilly
Leave a Comment