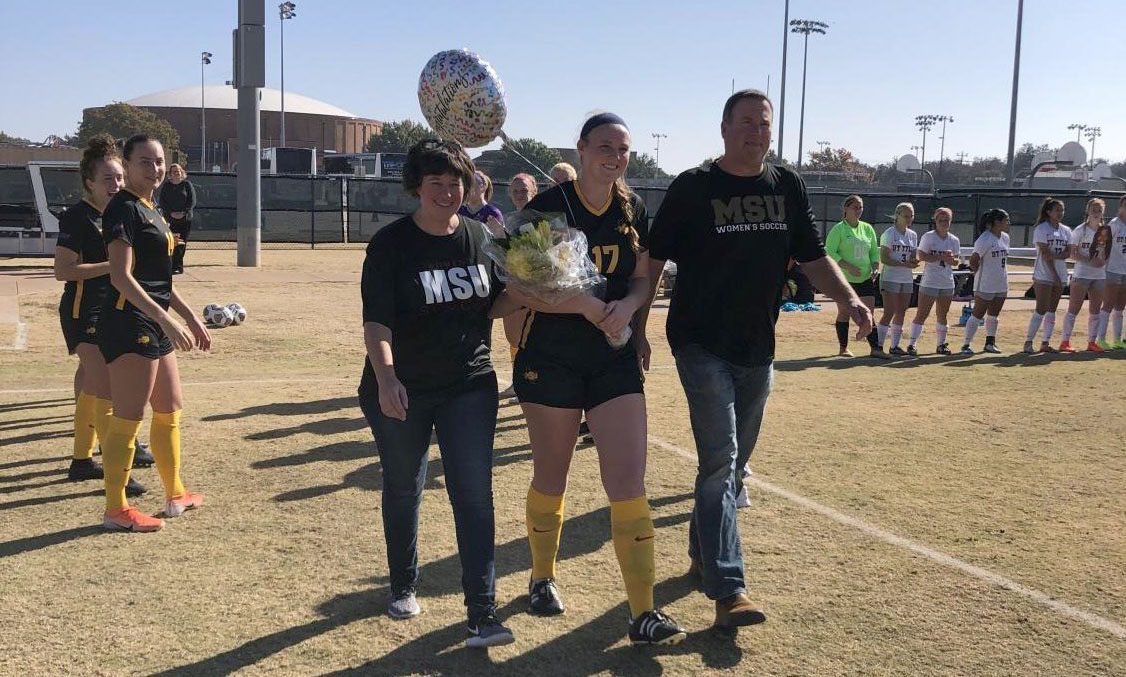 The women’s soccer team concluded their season with the senior day game on Saturday, Nov. 9. The game ended in a 1-1 draw, but the score paled in comparison to the years of memories made for chemistry senior Sarah Stewart. Stewart, one of three seniors completing their careers this season, has played a total of five seasons for the women’s soccer team and been an active student on campus. Stewart said she was grateful to have finished with her friends she has known from her humble beginnings as a freshman.

“It was so great to share the night with two people (seniors Imani Morlock and Michaelann Greenfield) who have been with me through all five seasons,” Stewart said. “It will be cool to look back and see that we all started and ended together on the same day.”

Over the course of her career as a Mustang, Stewart logged a total of 6,015 game time minutes. Her leadership and soccer skills landed her a place on the All-Lone Star Conference second team in 2017 and an honorable mention in 2018.

“My favorite soccer memory is definitely scoring the winning penalty kick to win the conference over Commerce my sophomore year,” Stewart said. “It was a great feeling and a great moment.”

Stewart’s teammates can also attest to her athletics abilities. Engineering junior and fellow teammate Kennedy Turner said Stewart’s reliability and strength make her an important part of the team.

“Sarah is always there to cover us when we mess up and is a strong consistent player,” Turner said. “She is always encouraging the team and pushing everyone to be the best they can be, even at 6 a.m. practices.”

Her outstanding characteristics off the field also earned her the award of Lonestar Conference Commissioner’s Honor Roll seven times as well as capturing a spot on the LSC All-Academic team in 2018. Stewart also participated in the Student-Athlete Advisory Committee, working to better the experiences and opportunities of all student-athletes on campus.  Stewart said SAAC proved to be a useful and enjoyable learning experience.

“I was nominated by my coach to be a part of SAAC and later became the president after attending the conference, which was really cool. We got to learn what the other schools in our conference do on their campus and bring those ideas back and share them with the students here.”

Stewart’s reputation for both academic and athletic ability set a great example for her fellow student-athletes and has an influence the reached beyond her peers. Head women’s soccer coach Ryan Spence said she has a number of qualities that contribute to her success both on and off the field.

“Sarah is very mature for her age and is dedicated to our team efforts as well as her own personal goals,” Spence said. “She has handled a lot of adversity and still manages to be a genuine and happy person, all while being a great friend who knows how to put others first.”

Stewart will graduate in December with a major in chemistry and minors in biology, mathematics, and criminal justice. She has made a lasting impact on her professors, coaches and teammates, but to Stewart, the most important part has been the relationships created

“I’ve been so grateful for all the friendships I’ve made over the past five years. Its definitely been the best part about being a Mustang.”