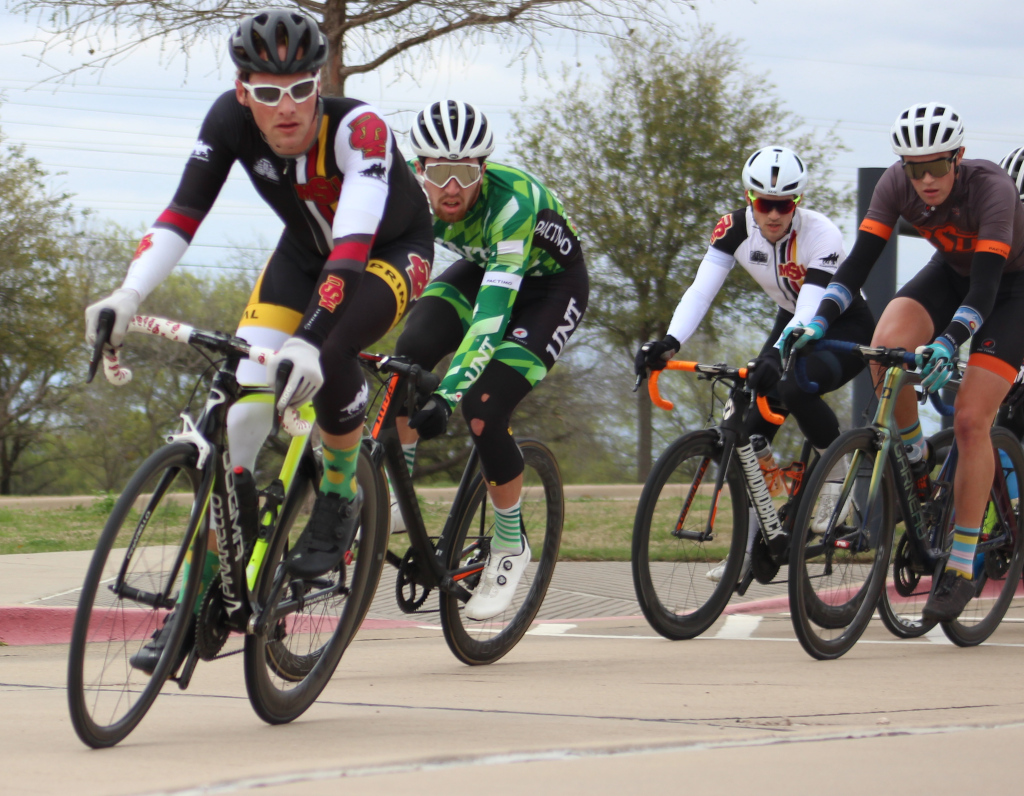 Whether cycling competitively or recreationally, safety comes first. Multiple reasons can be given for not wearing a helmet, but all of them go out of the window when a cyclist takes a tumble. Representatives of the cycling department share the importance of protection and taking proper precautions while riding, along with a couple of stories that illustrate the dangers of biking.

Frank B. Wyatt, professor and sponsor of the cycling team, said, “You fall in an instant. It’s so quick you don’t have time to react. Hitting your head on cement without protection can kill you.”

Yes, people wearing helmets are still susceptible to experiencing serious injury and sometimes death. The helmet simply increases the likelihood of survival in the event of a fall.

Wyatt says it can be scary, as a cyclist, to trust drivers on the road, especially during certain hours. He says that a driver ran into a friend of his while he sat stationary on his bike at a red light, and broke his spine.

The cycling team experienced a scare of their own five years ago when two men cyclist got hit by a Cadillac on Maplewood.

Charlie Zamastil, director of the cycling team, said, “They had been participating in a team ride, which had ended, and the three of them decided to continue riding on their own to a bike shop. They were headed south on Maplewood when one of them got a flat tire moments before the incident occurred. So, he got off the road and was just going to walk his bike the rest of the way, because he was only a couple of hundred meters away. While he was walking on the sidewalk the other two were riding two abreast when a man in his 80s, who was not supposed to be driving, rear-ended them with his boat of a Cadillac.”

The third cyclist dodged a bullet… or a car in this case.

“The person with the flat did not get hit because he had just gotten off of the road, otherwise he would have been hit too.”

While accidents sound like a nightmare to cyclists and non-cyclists alike, those who ride understand what they get themselves into when locking their cleats into the pedals. Although unaware of when an accident may occur, cyclists accept accidents as a normality in the sport.

Zamastil said, “These guys were probably riding 15 or 20 hours a week, and 40 to 45 weeks out of the year. So, it is just law of averages at a certain point that there is going to be an incident, in the same way, that if you drive a car long enough you’re bound to have an accident or get a speeding ticket. Some incident is going to happen.”

Taking the law of averages into consideration hopefully leads to exercising precautionary actions as a rider.

Fidel Goytia, exercise physiology graduate, said, “I always wear a helmet, no matter how ‘easy’ or short the ride is. Always signal turns with your hands. I carry a front and rear light if there is a chance it will get dark while riding. I also wear bright or reflective clothing.”

Goytia mentioned wearing a helmet regardless of any circumstance, and experienced bikers second this.

Zamastil, for example, said he does not allow his cyclists to even ride across campus without a helmet.

He said, “They are students first, and key to that is protecting their heads. It is the most valuable resource that we have.”

Wyatt proudly advocates cycling safety. After all, currently recovering from a brutal accident of his own sent yet another reminder to him of the importance of adequate protection and precautions. Part of the precautions that cycling coaches take include teaching students how to stay on the bike.

Zamastil said, “We try to work on their technical skills. Anyone who spends enough time on the bike will develop cornering ability and handling. But, there are people that it comes to more naturally, and there are those who have way more experience than others.”

He went on to name four of his guys that display great balance while riding.

“Sam, Ricky, Zach, and Pablo are really good bike handlers, to the point where if you tried to knock them off of their bike you’d probably end up falling.”

However, some accidents simply cannot be avoided, even if the cyclist maintains good balance and takes all of the proper precautions.

Wyatt said, “Generally speaking if a cyclist gets hit its not their fault. We wear bright clothing for a reason.”

He believes many of the problems on the road stem from texting while driving.

“The biggest danger that we face now is inattention to driving caused by cell phone use. There is nothing we can do about that. You try to ride on roads that have shoulders, but even then, cars drift over when they are sitting there looking at their phones. I had a friend that got hit by a car because the driver was looking at their cell phone.”

Defensive biking certainly appears to be a requirement in this sport, as a lack thereof proves to be deadly. When riding, Wyatt said he does his best to treat himself as a vehicle.

“The Texas Department of Transportation will tell you that bikes are supposed to follow the rules of the road. You are a moving vehicle. You ride with traffic, not against it. You’re supposed to stop at stop signs and red lights and give hand signals. Usually, when we are out riding we adhere to that because of fear of cars.”

When riding, Wyatt said he considers multiple factors and utilizes his wisdom to the fullest extent.

Wyatt said, “I was always very careful during my Sunday morning rides because I knew a lot of people were still hungover or maybe finally going home from the night before.”

He further described his thought process in choosing a path that both excites him and keeps him out of harm’s way.

Specifically about Wichita Falls citizens, Wyatt gives examples of places to avoid in the town, as well as strategies to use when riding in groups.

“It is dangerous to ride on southwest parkway, and not so dangerous to ride on some of our country roads. You try to ride in single file when you are on a busy street, but when you are not on a busy street you can space out. So, there are a lot of safety rules that you try to follow, and even then, you can hit a gravel patch or cross wheels with another cyclist and end up crashing.”

Accidents are not limited to mistakes that drivers and bikers make but include uncontrollable elements as well. Zamastil shared another story about one of their lady cyclists in Grand Junction, Colorado.

“We had one girl have what is called a ‘high altitude pulmonary embolism’ twice. Essentially, you don’t have enough oxygen because you’re at altitude, you’re exerting yourself a lot, and your blood oxygen saturation gets dangerously low.”

Zamastil explains that a person’s blood oxygen saturation should be at sea level between 95 and 100%. It might get down to 92% when you first get up to altitude, and then when you start exercising it gets lower and lower. But once you get down to the 70% range, that is not enough oxygen to the brain and your body starts to shut down.

Zamastil said, “She had that happen during the team time trial at the national championship when it was in Grand Junction at 7,000 feet. At training camp in Albuquerque, the same thing had occurred, with no cell reception and no way to get her down from the mountain.”

Zamastil said the group flagged down a person who happened to be a fellow MSU cyclist on the same ride. He assisted them in getting her to the base of the climb where help waited.

“I did not leave her side for a moment, and I think I had learned from the incident with Sam and Ricky.”

This would not be the last of the crashes. In fact, a separate incident occurred in the same place.

“We had another kid crash descending that same mountain, but on a different day. He went over a guard rail and sliced his quad open. I could not look at it. It was horrifying to look at.”

Zamastil listed a few of the accidents since the major one five years ago.

“Craig crashed, Bill scraped up a few bones, and Jason got a concussion in our home race.”

He said. “If you think about that though, if he had not been wearing a helmet he’d be dead. He did not know what day it was. He did not remember racing a bike that day at all.”

While Jason stands among the survivors of such frightening mishaps, others experience misfortune.

Wyatt said, “I got to an accident on our trail here in Wichita Falls, and the man was going down a curving slope when he did a header into a retaining wall. He was in his 70s and died.”

Whether or not the man wore a helmet remained unknown. Wyatt said seeing students without helmets worries him. However, he did admit to riding without a helmet during his younger years.

“Growing up, I was the same way. It was not until I started racing bikes and they required us to wear helmets that I began using them. I used to ride with a lot of guys that never wore a helmet.”

He said he relates to people who ride without headgear while urging them to make a better decision.

“It’s hard for a student to think that way. It’s not from stupidity, but it could be because the student cannot afford a helmet, or they are trying to cut through campus to get to class in a hurry.”

Cornering – a technique cyclists use to maintain or gain speed and balance when turning a corner.

Handling – allowing your body and bike to work together as one. Good handling usually results in safe riding by yourself and with others.

Two Abreast – A two-abreast formation is approximately the width of a car, and cars should pass them as if they were passing a slower automobile.

Cross Wheels – the event of cyclists wheels bumping into one another.