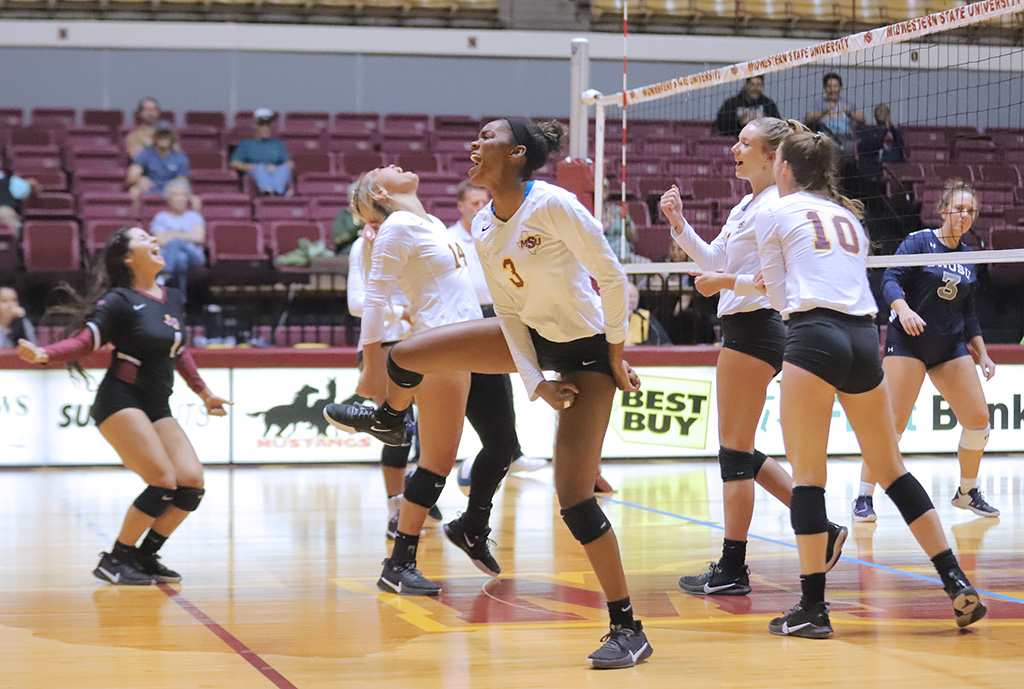 The Mustangs celebrate winning the first set of the game against Southwestern Oklahoma State. Oct 23. Photo by Bridget Reilly

Led by Lauren Honeycutt (No.19), middle blocker and kinesiology sophomore, the ‘Stangs had 50 kills on 46 assists in attacking play. Honeycutt had ten kills and hit a career-high .615 percentage. The girls had ten players with five or more kills, compared to three such players for SWOSU. The Mustangs hit a season-high .369 percentage.

The ‘Stangs won the three sets 25-17, 25-18, and 25-19.  Honeycutt scored each of the set winning kills, all off assists by Sarah Glawe (No.10), setter and education junior. Despite back-and-forth starts to both the second and third sets, the girls pulled away and never gave their opponents a real chance of coming back.

Defensively, the team held the Bulldogs to a .094 hitting percentage. The ‘Stangs were strong in front of the net and had six blocks. Honeycutt and two solo blocks and two assisted blocks, Rockelle Gholson (No.14), outside hitter and mass communications senior, had two assisted blocks, and Janiya Chapman (No.7), outside hitter and political science freshman, had a solo block. Audry Lopez (No.1), defensive specialist and biology junior, led the team with 12 digs.

“[Our difference is] probably our constant practice,” Howes said. “We have very few days off and we lift weights twice a week.”

The volleyball team’s next game will be against Texas A&M -Kingsville Friday, Oct. 25 at 6 p.m. in the Colosseum.