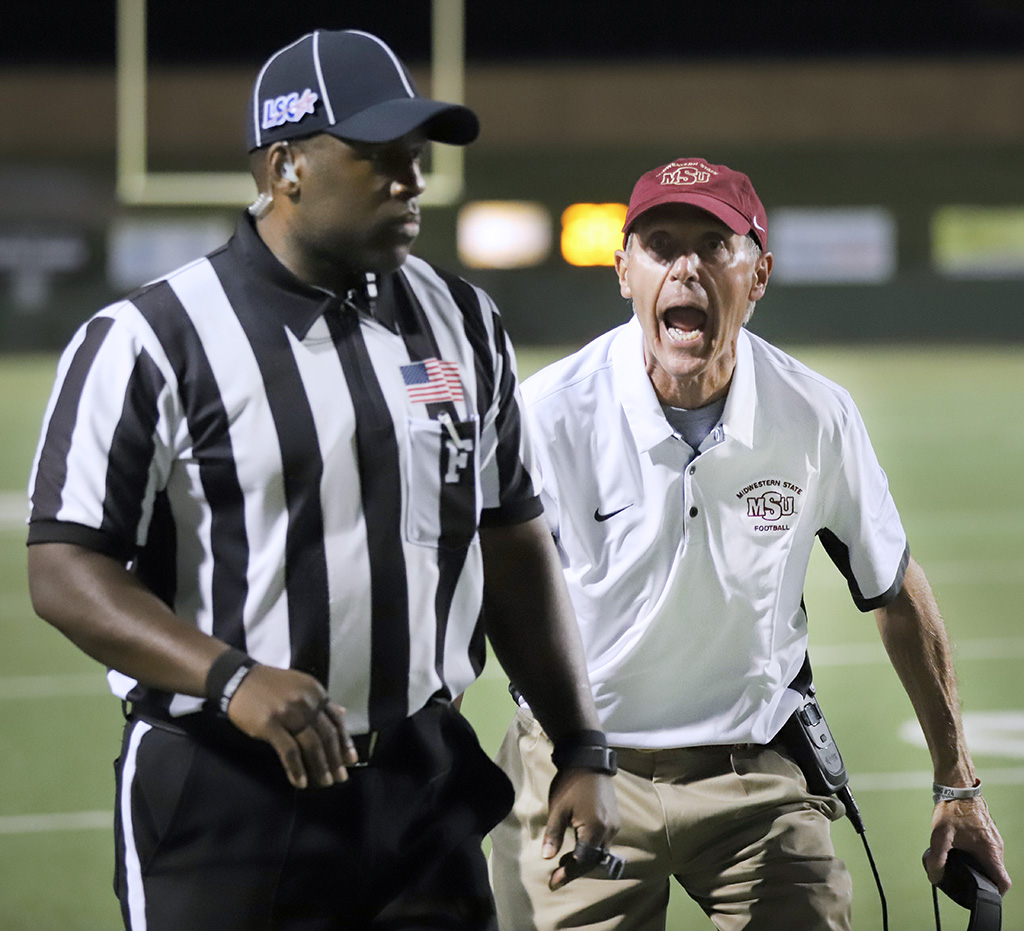 After a call against MSU's offense, head coach Bill Maskill disagrees with the sideline referee in game against Tarleton State University, Oct 27. Photo by Bridget Reilly

Against rival Tarleton State University, the Mustangs lost 34-35 at the homecoming game in front of a crowd of 9,247 people.

At the 14:30 mark of the second quarter, TSU made a touchdown making the score 13-7 because of a missed extra point attempt. The Mustangs responded with a 5-yard rushing touchdown from the quarterback and accounting senior Layton Rabb making the score 14-13.

The Texans did not receive a touchdown on the next drive, a yard away from a touchdown. TSU’s drive was ended with a forced fumble from defensive back and computer science junior Marcus Wilkerson with the football being recovered from defensive end and exercise physiology senior Alec DiValerio at the 07:45 mark of the second quarter on the one-yard-line.

As the game was approaching half-time, cornerback and kinesiology junior DaMarcus Wilson forced and recovered a fumble with 46 seconds of regulation left in the first half at the 26 yard line. The team went 26 yards as and scored its third touchdown from a 1-yard rushing attempt from running back and mechanical engineering senior, Vincent Johnson with 24 seconds left to go before halftime. The score going into halftime was 21-13, Mustangs.

As the fourth quarter commenced, the Mustangs started by going 32 yards in 11 plays. On a field goal attempt from 41 yards, kicker and exercise physiology junior, Jaron Imbriani did not convert, forcing a turnover on downs. TSU was limited to three plays and four yards the following drive. As MSU took possession of play at the 12:12 mark of the fourth quarter, the Mustangs’ drive was short-lived to two plays as Rabb’s pass was intercepted by TSU  at the 27-yard line. TSU went eight plays and 73 yards to score a touchdown followed by a successful two-point conversion to move the score to 28-21, Texans.

The game went to overtime.

Bill Maskill, head football coach, said the loss was disappointing but he was satisfied with the team’s toughness.

“The kids are devastated, especially about the way we lost. But they [the football team] were resilient all game long. We never gave up, we kept battling the whole night. Things didn’t go our way, but our kids kept fighting,” Maskill said.

Rabb said if there is one thing they can build upon a successful facet of the game, it would be scoring a touchdown with not a lot of time in regulation.

“We showed that we can go on a one-minute drill to score a touchdown,” Rabb said.

DiValerio said the loss was tough to experience, but the team will not dwell on the loss.

“It’s a sour taste for the next 24 hours, but I feel like the guys know we have to move on and win out if we want to have a chance of making it to the playoffs,” DiValerio said.

Maskill said the homecoming traditions did not affect the football players’ performances.

“We [the football staff] let our kids [football players] go back to their apartments or dorms. They didn’t go to the bonfire. There are enough distractions during the course of the week. Former players and alumnis coming back during homecoming week was a good thing,” Maskill said.

Offensive lineman and business management senior A.J. Rolland said the loss is only one result as he wants the team to start focusing on next week’s game.

“We’re going to come to work on Monday, go to meetings about football and watch the film to see what we can build upon and what we need to improve on in order to prepare for the next game,” Rolland said.

The team has a 6-2 overall record, with a 4-2 record in the Lone Star Conference.

The next home game for football will be on Nov. 10 at Memorial Stadium against West Texas A&M University at 1 p.m. 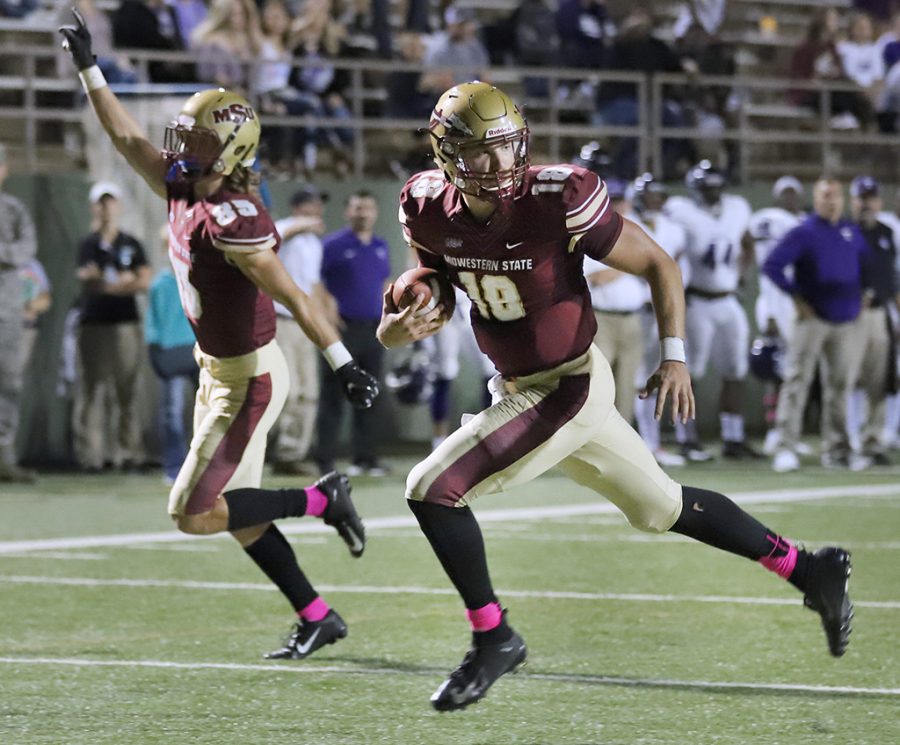 In an earlier version of this story, we incorrectly reported the final score of the game. MSU lost 34-35. The Wichitan regrets the error