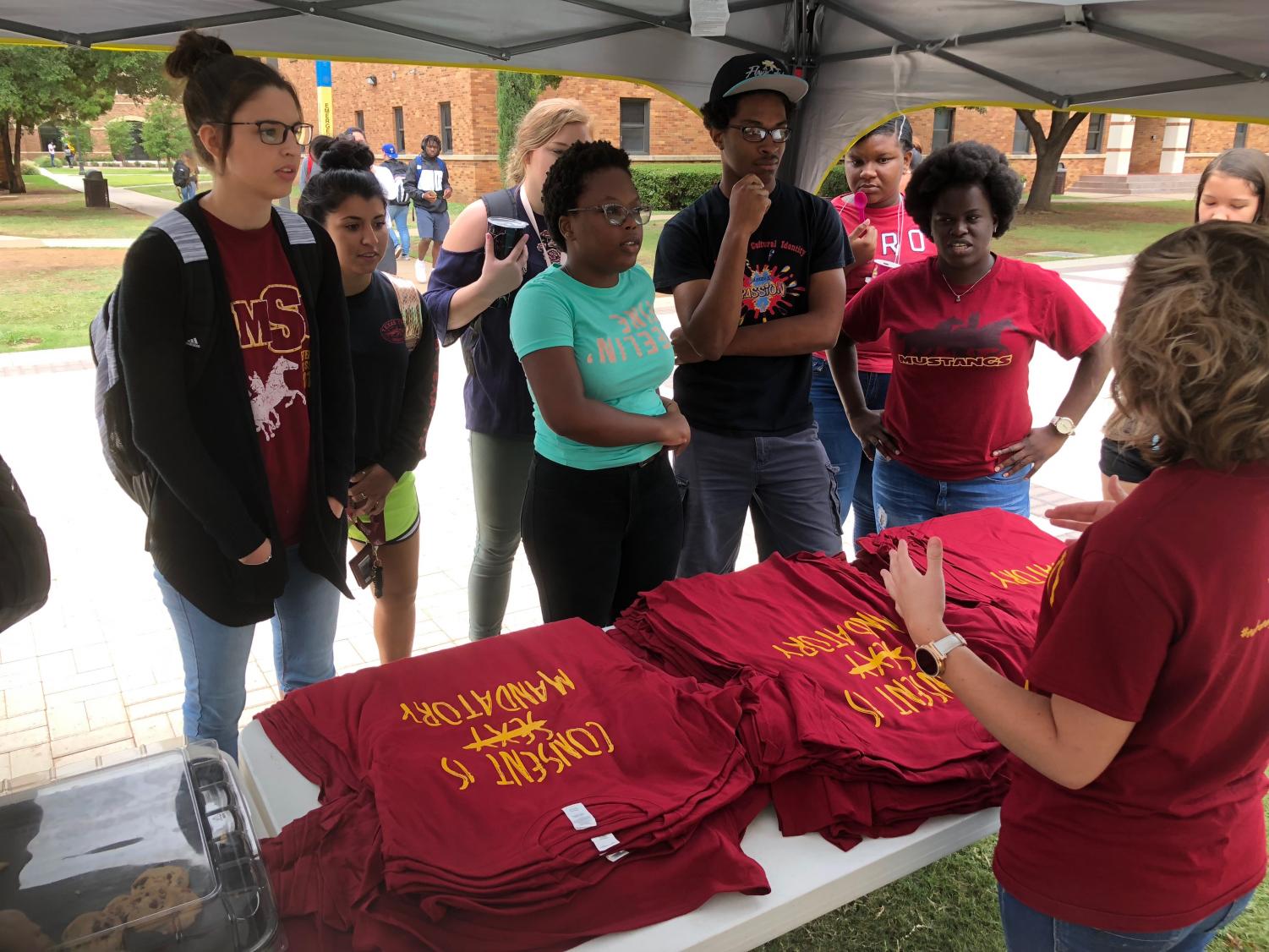 Student wait outside Clark Student Center to get their "Consent is Mandatory" shirt, prompting a discussion of what consent means on Consent Day Sept. 6, 2018. Photo by Bradley Wilson

Student wait outside Clark Student Center to get their "Consent is Mandatory" shirt, prompting a discussion of what consent means on Consent Day Sept. 6, 2018. Photo by Bradley Wilson

After incident in bar, student reminds others to be aware of surroundings on Consent Day 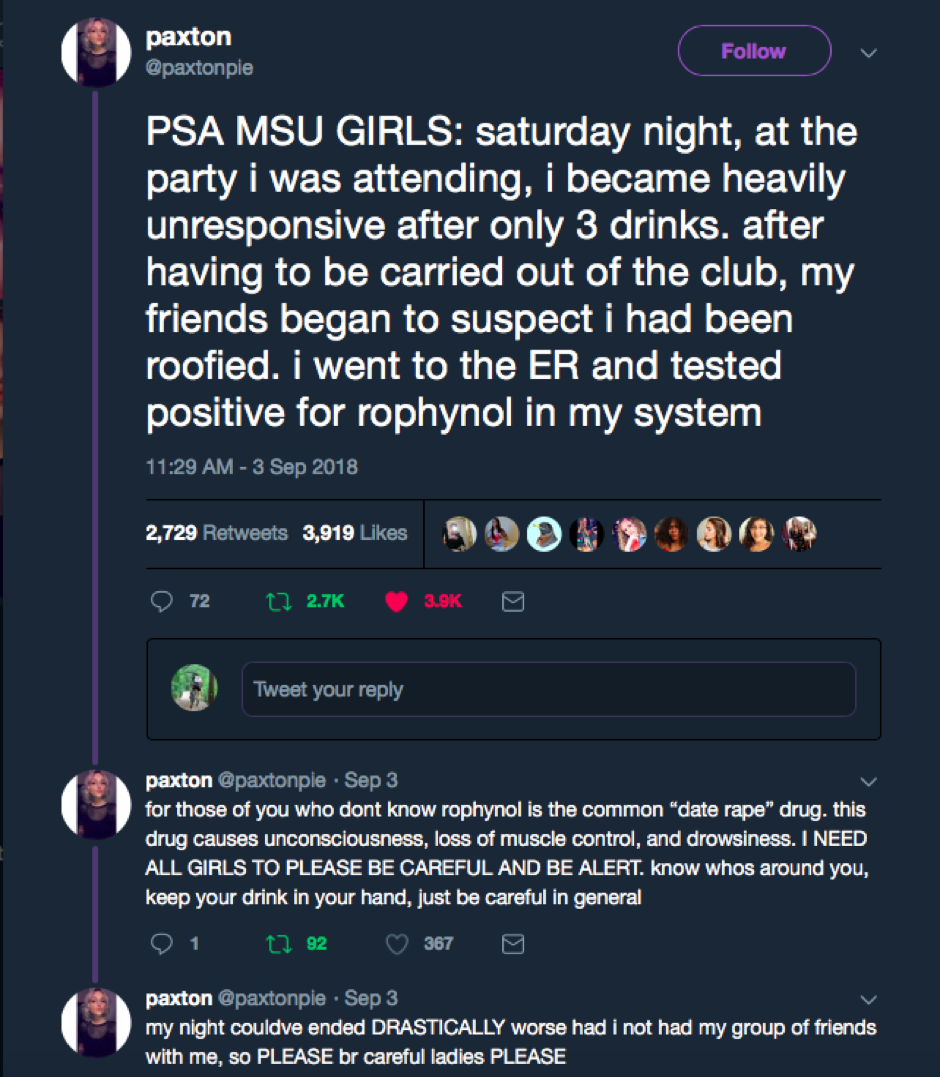 It was supposed to be an evening of fun and celebration as Paxton Wade, kinesiology senior, and Kenna Brackeen, a graduate of MSU Texas, set out to celebrate Wade’s roommate’s 24th birthday Sept. 1.

The nightclub was at full capacity that evening. To get to the Mix Premier Nightclub bar on 5th Street, party-goers had to elbow their way through the crowd. The pair bought a drink each and proceeded to the VIP section on the top floor. Within 15 minutes of taking her first drink at the nightclub, Wade said she fell unconscious.

Two days later, Sept. 3, according to Wade, the staff at UrgentCare found 26 percent of the date-rape drug, Rohypnol still in her system.

Fluntirazepam, also known as the date-rape drug, Rohypnol, is a sedative used to treat anxiety, sleep, and seizure disorders.

“I felt good, I was dancing, taking pictures, feeling myself,” Wade said. “Then all of a sudden, I began to feel dizzy, not a drunk feeling, more like a medicated dizzy.”

“I look over to her, and all of a sudden she lays down,” Brackeen said. “I’m staring at her thinking to myself, something doesn’t feel right, something is wrong with her. Everyone thought she was just intoxicated, but as soon as I touched her, and felt how hot she was, I knew we had to get her out of there.”

Wade said she had lost all motor function, and the ability to form a coherent word.

The Centers for Disease Control and Prevention said the most common side effects of the drug are difficulty with motor movements and loss of muscle control, intoxicated feeling, nausea, loss of consciousness, and problems forming words.

With the help of Wade’s roommate, a bartender and Brackeen, Wade got home safely. However, as Brackeen carried Wade through the full-capacity nightclub, comments from attendees at the event, sparked outrage from Brackeen.

“As I am carrying her outside, I hear comments from men saying, ‘I’ll take care of her for you.’ And ‘why don’t you take her to my place?’ I was furious. Here my friend is, unconscious, and instead of helping me, or asking if she is ok, they make jokes about raping her.”

Wade took to Twitter on Sept. 3 and spoke out about her experience. The tweet gained traction, with 2.7K retweets and 72 comments of support.

“I have had so many people reach out to me through twitter, telling me of a similar experience at MSU parties. Until it had happened to me, I had not heard of it ever happening.” 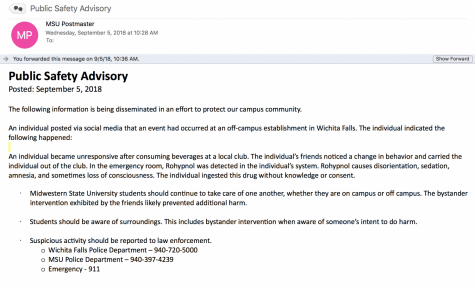 Sept. 5, MSU students received a Public Safety Advisory, in response to the incident and the response on Twitter. The email reminds students about by-stander intervention and commended the friends of Wade for preventing harm.

As of Sept. 6, Wade has not reported the incident to Wichita Falls Police Department, or MSU Police. However, Title IX coordinator, Rachel Fornof encourages Wade to make contact with them.

“Everyone on campus is shocked that this happened in our community but no one is ignoring it so I think that that is really important,” Fornof said. “The feedback the students gave in support of her is, I think, the best part of it. The university can be as involved as they want, but students supporting students is where we need to get to.”

It is unknown when the drug was put in Wade’s drink, or who did it, however, Wade and Brackeen have their suspicions.

“I always keep whatever I’m drinking, on me at all times. I think when we were walking through the crowd with our drinks, someone put it in there. It is colourless, and doesn’t have a taste, I would never have known,” Wade said.

Wade says the “rule” of never putting your drink down, is a form of victim blaming.

“Women are told to always keep an eye on their drink.” Wade said. “If they don’t, and they are drugged, it’s their fault for not being careful. That is completely wrong. I had my drink in my hand the whole night. My advice to women is: go out with friends that you know will look after you. The only way I escaped that night was because of my friends.”

Today is Consent Day @MSUTexas. What is consent? @zachsafteryou says, “strong and enthusiastic yes for the duration of the activity.” pic.twitter.com/YLxYcvtYcZ