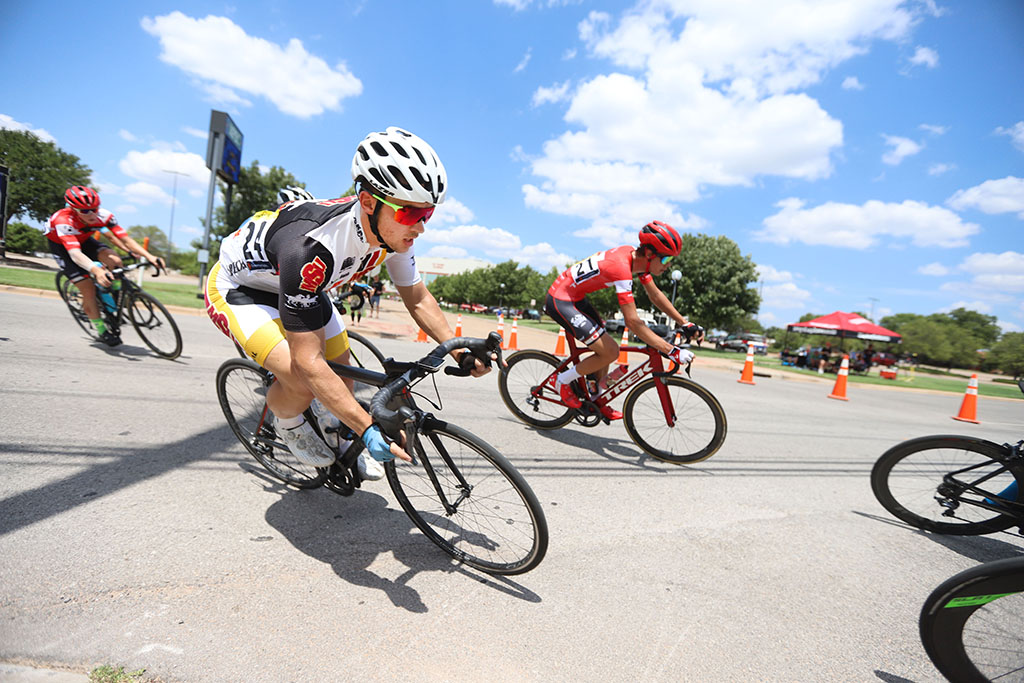 Sunday afternoon the high temperature didn’t quite reach 100. It stopped short at 99. But for the 43 cyclists who finished the day racing on downtown streets in the men’s professional category, gallons of Powerade aren’t enough.

And that was just one of the 13 races Sunday and dozens more Friday and Saturday as part of this year’s Hotter’N Hell.

“Overall, I think it was a positive result for the school,” Cruz said. “I ended up third overall and I was second yesterday.”

“The winner, Tony Baca was a 2014 graduate who was on the cycling team for four years. Second place was TC Porterfield who spent a year on the cycling team. Third place was Pablo Cruz, a current student riding for the cycling team in his fourth year racing for us. Fifth place was Stephan Rothe who did both undergraduate and graduate school at MSU who recently finished his master’s. In 2016 and that was the same here he won the road race championship course with us.”

Cruz said he was surprised by how well he did in this year’s Hotter’N Hell. However, he added that hard work and being in good form are two important aspects of cycling.

“In cycling, you never know so you just have to try and try and try,” Cruz said. “If you’re in good form, that’s a big advantage.”

Cruz said he enjoys the adrenaline rush cycling gives him and how healthy it is for him.

“It keeps you healthy and in good form,” Cruz said.

Cruz explained how important it was for him to get a good result for MSU Texas as well as the city of Wichita Falls. He further said having a good result in Hotter N’Hell is among the most important races for the cycling team.

“This is the biggest race in Texas, and it’s like our home race. So, I wanted to get a good result for the school and all the people that support us here in Wichita Falls,” Cruz said.

Cruz said this is his best performance at Hotter’N Hell.

“The previous Hotter’N Hells, I’ve been making the top 10,” Cruz said. “This year, I made the top three so I’m pretty happy with my result.”

“I was hoping for a way better result,” Montalvo said. “Sometimes you have it and sometimes you don’t you train hard but its a little bit of luck that helps.”

Montalvo said she was satisfied with her performance given the level of competition.

“I did what I could,” Montalvo said. “There were very strong women out there. So, I tried by best to stay in position and get to the sprint but it’s very competitive. I did what I could and I’m happy with it.”

Montalvo said the most important thing that she learned at Hotter’N Hell was to not underestimate herself and not give up.

“Sometimes you think something is going to happen then you do better than what you expected,” Montalvo said. “But, you mentally give up. So that is one thing I really need to work on.”

Montalvo said she had raced in four previous races at this years Hotter’N Hell and her best result was at the mountain bike race.

Zamastil explained the difficulties in organizing Hotter’N Hell. This includes being able to organize and trust over a thousand volunteers as well as care for hundreds of racers.

“There are about 700 individual racers,” Zamastil said. “There are over a hundred of core volunteers; however, we rely on the support for over a thousand volunteers for the entire event. You have to be organized and trust the people you have delegated responsibility to. You have to find the right sort of people that understand the job and the importance of it an appreciate the importance of this event.”

“Once everything is set in motion, I like watching the races,” Zamastil said. “Since everyone understands and are doing their job, I get to enjoy a little racing and watch my MSU riders compete and try to win.”

“It was a challenge that everyone had to deal with,” Van Winkle said.

Zamastil said the most difficult aspect of this Hotter’N Hell compared to last year’s Hotter’N Hell was the weather. He said that the wind made racing more difficult for the riders by making their timing twice as slower.

“When the wind blows the way it does, races, especially 100 mile races, in this heat blow the field a part,” Zamistil said. “There’s only so much road that you can share and everyone is trying to get that last inch of space in the protected peloton where they get drafting. Once the win picked up, I don’t think we saw a group bigger that four or five guys. The wind made for a longer day. Our last race finisher started at 10:30 a.m. and came in around 1:30 p.m.”

“The [race] wasn’t really that great for us as a team,” Ballesteros said. “We hoped for more but you got to do what you got to do.”

Van Winkle said he plans on improving his foundation and physical strength.

“I did as best as I could and I think that going into next  year I would like to have better foundation and hit the weight room more,” he said.

Ballesteros said the most important thing he has learned in this race was the importance of positioning.

“Positioning is very important. That was kind of my downfall. I was on the back most of the race and it cost me at the end.”

Ballesteros said he had previously performed in Hotter N’Hell.

“I’ve competed a couple of years ago as a junior in high school,” Ballesteros said.

Van Winkle said this is his first time competing in Hotter’N Hell.

“It was like the name it implies,” Van Winkle said. “It was really though but the support was fantastic. The atmosphere, the racing on the course has been amazing. This is arguably one of the best races I have ever gone to.”

Ballesteros said his favorite part of competing in Hotter’N Hell was the atmosphere.

“The atmosphere is probably the best I have ever been to,” Ballesteros said. “It’s so cool seeing the other riders.  It’s such a big event and cool to be a part of.”

Van Winkle said the best thing about Hotter’N Hell was being a part of the MSU cycling team.

“I liked all the pomp and circumstances but being here with the Midwestern cycling team has been awesome,” Van Winkle said.

Ballesteros explained how important it is for cyclists to train for events, such as Hotter N’Hell.

Van Winkle said he prepared for Hotter N’Hell by riding midday in Ohio. however, he said, due to the weather differences between Ohio and Texas, his preparations were limited.

“I tried to do a lot of rides mid day, but I don’t think it worked too well,” Van Winkle said. “Ohio is a lot cooler than this, being around 70 to 80 degrees.”

Alan Barrows, management information systems sophomore, said he was not impressed with his performance. He also said fitness was his largest obstacle in the race.

“I did very badly,” Barrows said. “I’ve not ridden in two-in-a-half months so I wasn’t fit enough or in the proper shape. Time to start training and lose some weight.”

Barrows said he did not preform as well as he did in last years Hotter’N Hell.

“Last year I was on the podium and this year I’m getting old,” Barrows said.

Kieran Correia, accounting freshmen, said this is his first experience at Hotter’N Hell.

“It’s a very hard race, and it’s very hot out here. It’s very different from where I’m from in South Africa.”

“There were excellent opportunities in pursuing a graduate degree in exercise physiology.”

Gregg explained the importance of hydration.

“It’s super important. You lose a tone of power as a result of dehydration. If you don’t have an ice on you or water on your back, you’re spending a tone of energy just to keep yourself cool.”

Gregg said the most important thing he had learned from Hotter N’Hell was the difference between racing in the crosswinds compared to racing in the mountains.

“Racing in the crosswinds is much different than racing in the mountains. So that’s something that I’ll be practicing in Wichita Falls.”

Given that it is winter in his home country, South Africa, Correia said the weather shock he has received in the United States affected his performance. He finished 34th place in the men’s professional category 1-2 race.

“I did okay considering how hot it is but there’s always room for improvement,” Correia said. “Even in the summer, we don’t get heat this. So it’s really a different heat and it was bit of a shock.”

Zamastil said this year’s Hotter’N Hell was successful; however, he also said that it needs room for improvement.

“We would like to do a better job at minimizing the crashes. I thought that we vastly improved our traffic control on highway 79 during the road race.” 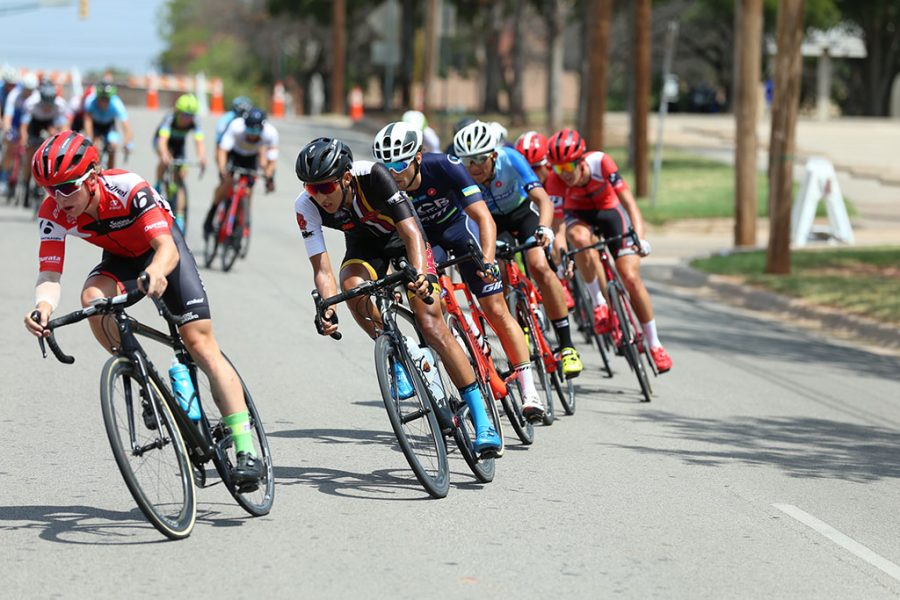