Moffett Library prepares for finals week without the bed bugs

The Moffett Library is quashing bed bug infestation rumors as staff from the library said the rumors are untrue, so students can continue to make the library their home for finals week.

“We’ve got on top of this as fast as we could and we’re just hoping that people would trust us to continue to do that kind of advocacy,” said Clara Latham, university librarian.

Bed bugs are parasitic insects that feed exclusively on blood and have been considered a public health pest by the Environmental Protection Agency, the Centers for Disease Control and Prevention and the United States Department of Agriculture. However, they all agree that it is very unlikely, though not impossible, that a bed bug infestation will develop in an office, classroom, or other non-residential environments, such as a department store

Latham said it was an isolated event.

“We had a laptop returned about a week and a half ago and our astute student assistant, I’m really happy she did, looked in the bag and realized there were some live insects. She reported to her manager and her manager called the [custodians] and had them come over, and they checked it out,” Latham said.

She also said staff analyzed the contents of the bag, disposed of the bag and contacted a pest control company about the matter.

“They came next day, closed down the media department and fumigated the area the laptop had been in when it was returned. He came back several days later to check his traps and there were no new insects, no live insects and he felt we really caught it in time,” Latham said.

The university librarian said in her 17 years of working on campus there has never been a recorded incident of bed bugs at Moffett library.

Students have the option to take a photo at the designated selfie station, set up by library staff. Photo by Tasia Floissac.

“We found silverfish in our books years ago. We found cockroaches in the bathrooms years ago. We’ve had rats in the ceiling and sometimes they die and the custodians have to go up and retrieve them, but as far as the library or library item being infested, this is the only one I remember,” Latham said.

Latham said the library continues to offer its services to students on campus and will be open for 24-hours-a-day ending May 10 at 10 p.m.

“We’re doing a selfie station in the reference department where we have a little display of some of our books and you can stand behind, put your face in the frame and have a selfie taken. We’re [also] doing a food for fines which will continue until the end of the semester, where you get an overdue fine forgiven if you bring a can of food to help out the food bank,” Latham said.

The university librarian said the aim is to make students as comfortable as possible as they prepare for examinations.

“We serve free coffee at the circulation desks and we have snacks from the Church of the Good Shepherd. They have [contributed] every semester and the [snacks] are free to anyone walking back. So you get a drink, couple of snacks, a packet of Kleenex — just whatever you need,” Latham said.

She said quiet zones will be enforced.

“Our third floor is still our quiet space so we expect students to be sensitive to that. If they need to work in a group and our study groups are full, we do limit them to four hours. So they can get on the waiting list. We actually have restaurant buzzers that will alert them when a room becomes available,” Latham said. 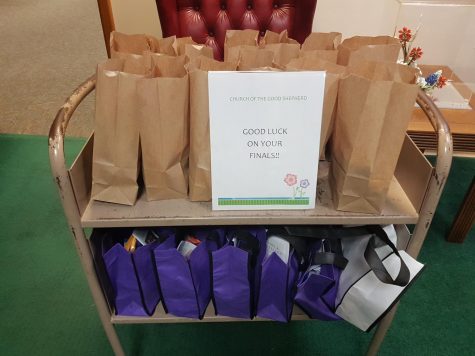 The Church of the Good Shepherd provided bags of snack for those in the library to take for free. Photo by Tasia Floissac.

Latham said finals week is usually a busy period for the library from about 8 p.m. to the following morning.

“More than 100 students are at the library during late hours,” Latham said and as such, additional hands are needed to make sure things rolled smoothly.

“We’ve had some turnover. We’ve had a brand new [night manager] starting this week and they are expected to be here for these overnight shifts. We hired two students per shift at up to maximum 20 hours per week, for just those two weeks paying them $9 an hour,” Latham said.

Chartwell’s Starbucks at the library will only be open until 7 p.m. during finals week.

Raisa Rolle, biology junior and student assistant at the Moffett Library, said, “It’s a double advantage. I get to work and study at the same time and it’s a very quiet environment. We get a lot of students here renting out study rooms and we try to make the environment as conducive as possible.”

Though the library is open to all students, some students said they still prefer to study at home.

“I prefer staying home where I’m more comfortable. I learn better there than I do in the library which is usually crowded during finals week,” Benton Vidal, mechanical engineering junior said.

Library officials issued a statement on the Moffett Library Facebook Page on April 30 to say the situation was under control. 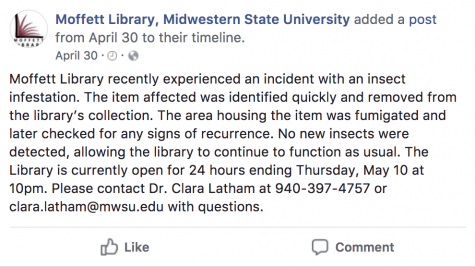