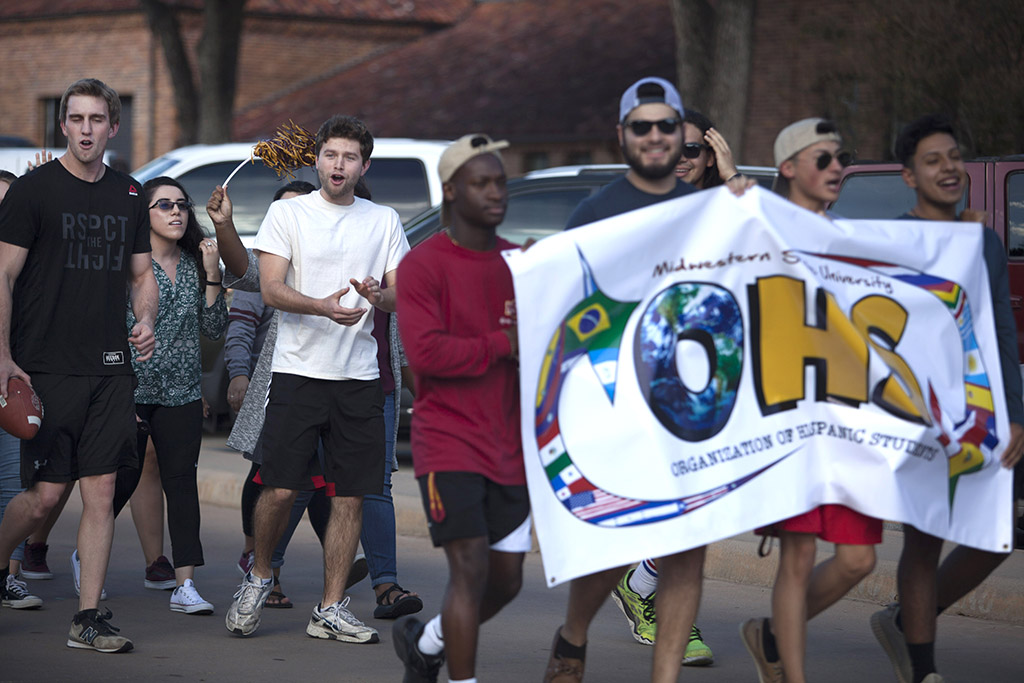 College about more than going to class

Whether trying out for a sports team, pledging for Greek Life or joining one of the campus organizations, student involvement increases mental health, helps students strive to graduate and increases overall enjoyment of the college experience according to campus officials.

According to Keith Lamb, vice president of student affairs and enrollment management, there are 98 registered campus groups available for students to join, all of which have positive impacts on student growth and endeavors in their college experience.

“Interacting with people outside of class where you focus on common interests is very important in developing a student,” Lamb said. “[Students are] developing the ability to work with others, and joining organizations says a lot to future employers about the student. [It says] students do like working with others and being a part of something that requires dependency.”

Kylah Broadnax, student-athlete advisory committee member, volleyball player and kinesiology freshman, said not everyone gets to experience college. Being involved helped her adjust to living away from home, she said.

“For me, as a freshman coming in, I was worried about missing my family and friends at home, but since I already had a group here, it was easy to adjust because I knew they had my back and I could go talk to them,” Broadnax said. “I definitely [feel like being involved is important] because college is a blessing and if you don’t take advantage of it then what are you here for? Why not make it the best experience it can be?”

Not only does being part of an organization require a certain level of discipline, but it also teaches time-management skills, Lamb said.

“[Students learn] to balance involvement with coursework, get rest and to generally be healthy,” Lamb said. “To be involved allows a student to make connections, opens a world of informal resources to them that perhaps were not available prior to joining a campus group.”

Jacob Warren, Student Government Association member, Tau Kappa Epsilon senator, Maniac member and economics senior, said being involved in as many organizations as possible has better prepared him for his future.

“I would say being involved has helped me learn more than what I would have in the classroom,” Warren said. “College is a package of experiences and opportunities to learn. I learned a lot in my classrooms. I learned how to be more professional and be more prepared in the real world, and everything I’ve learned in the classroom I have been able to apply in the real world which has helped me enhance those skills.”

According to Broadnax, being involved in more than one group has helped her be more responsible with her time and efforts.

“School is not exactly how life is going to be set up,” Broadnax said. “If you’re doing other activities too, you’re going to have other things to do outside of school and better prepare yourself for your future. It helps with responsibility and keeps you accountable.”

“The informal resources are one of the main reasons why,” Lamb said. “You may meet others who have had the same course or instructor and they can help you study, give you pointers and encourage you. If you feel connected to campus, you are more likely to stay especially if you have a peer group you enjoy being with.”

“It’s helpful mentally because a lot of times freshmen will come and become home-sick,” Jaimes said. “If they find other people with the same interests and ideology they can befriend them. Communities are important because students are able to join and bounce ideas from community to community to share ideas.”

According to Warren, being involved taught him that he is a leader and he was able to apply that skill into his coursework and organizations he was involved in.

“For example, group projects. You learn how to work with people,” Warren said. “You do not agree on everything. There were times when we communicated very well and times when we didn’t. So you get practices with doing that and, being in SGA, I deal with that all the time. The stuff I learned there can easily apply in other aspects.”

Being involved in campus community is important so students can voice their opinions, according to Jaimes.

“Student government is a [good] way to voice your opinion and so is the school paper,” Jaimes said. “Being involved looks good on a resumé and that’s just one more reason students should be involved.”

Broadnax said being involved effects campus culture in a positive way by giving students pride for their school.

“[Student involvement] provides a culture that students are proud to be here and want to be involved to make it that ‘once in a lifetime experience’,” Broadnax said.

Campus involvement benefits campus community and student life, according to Lamb, and it is important to be involved with student organizations and campus communities to generate connections between students and learn how to work together as a unit.

According to Broadnax, involvement helps generate connections with people you wouldn’t have imagined.

However, according to Lamb, it is possible for students to be over involved, it’s something that can have a negative impact on everything from grades to personal relationships.

“There is a point where it affects [a student’s] ability to keep up with school,” Lamb said. “It affects the ability to get [adequate] rest and [a student’s] overall wellness. It’s a balance that students struggle with, and it’s something I struggled with as a student too. Being involved is a positive thing, but over involvement can create time-management issues and result in lack of sleep.”

Warren said there was a point in his college experience when he felt completely over involved and spread too thin.

“I was trying to do everything in SGA,” Warren said. “I was working at Lowes as well has being a full-time student. I was stressed out and I was always tired which reflected on my grades, and I did poorly that semester. I was burnt out and I knew I needed to cut something out, so I quit work and later on I got offered a position in SGA. Everything worked out, but that was a very valuable lesson I learned.”

Warren said a good example he likes to tell his friends about being spread too thin is how you put MiO in water.

“Consider yourself a bottle of MiO,” Warren said. “If you concentrate yourself in a few bottles of water, you’re really good. If you spread yourself too far in more bottles, you become diluted and it doesn’t taste nearly as good and you become less effective. You are not able to dedicate yourself efficiently in too many roles, but if you focus on a couple then you can be effective and get done what you need to get done.” 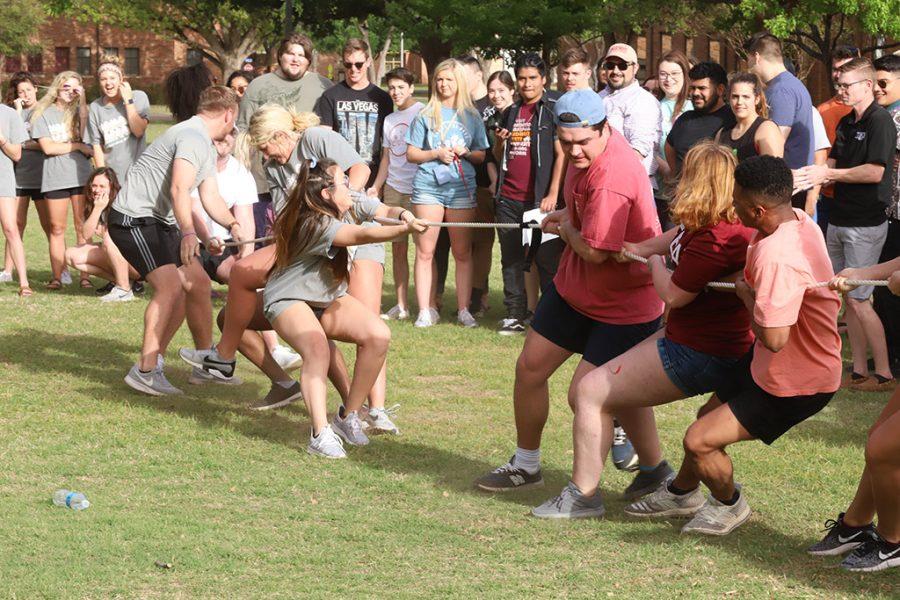 Gallery|24 Photos
Harlie David
Fraternity and Sorority groups at Midwestern State University are competing in a game of tug of war during Greek Week on the Quad field on Fri. April, 13, 2018. Photo by Harlie David