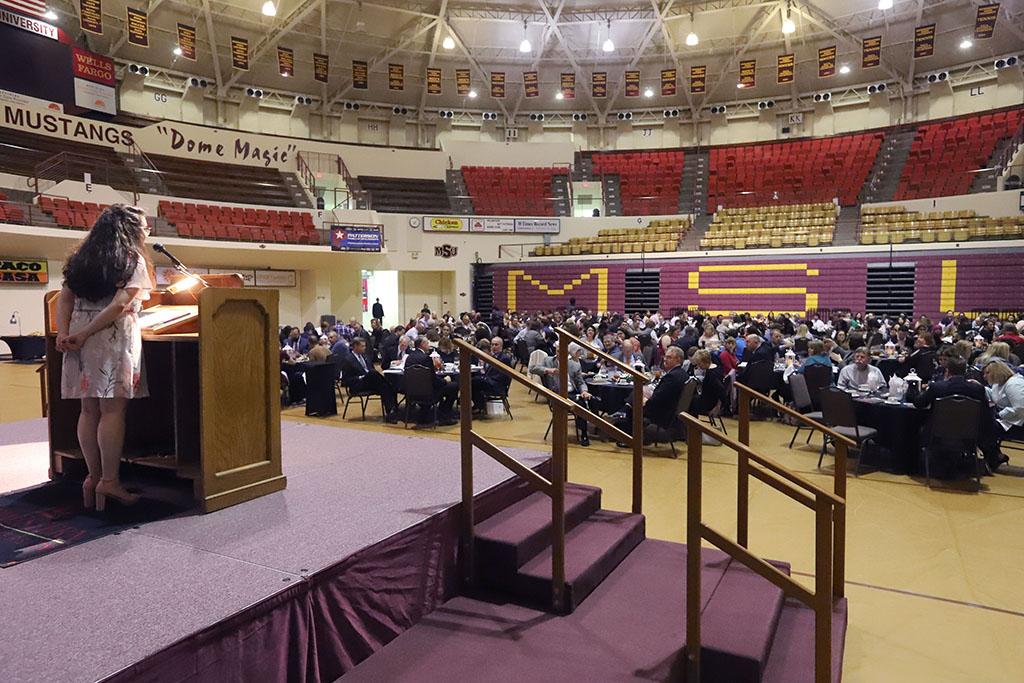 To open the ceremony, Maria Peña, student government association president and political science senior, introduces the evening and speakers at the Honors Banquet on Friday, April 20, 2018. Photo by Brendan Wynne

More than 200 students, parents and faculty filled the D.L. Ligon Coliseum in anticipation to see who would receive academic honors and scholarships at the annual Honors Banquet on April 20.

The banquet acted not only as a way for students and faculty to celebrate the hard work they have accomplished throughout the year, it was also an opportunity for many proud parents to see the accomplishments their children strived for.

According to one of the people responsible for the banquet’s coordination, Treva Clifton, assistant to the university president, the event usually costs around $7,000 to host.

Clifton said, “We work on it months before because we have to get all the student nomination forms in. The students fill out their forms, they go through the committee, and that is not including meeting with the caterer and the decorations and all that. It is a long [process] and there are a lot of people that help.”

Though it is time-consuming to coordinate, Clifton said it is rewarding to see the event in action.

Starting out the night attendees ate dinner, while a sense of anticipation filled the air as students eagerly waited to hear the names of the award winners.

James Johnston, provost and vice president of academic affairs, said, “This is a celebration and a culmination for the students and the faculty. We work together to see them achieve these milestones in their lives, so to have these moments of celebration is as important to us as it is to our students.”

Throughout the night students received various honors in the areas of leadership, service and excellence. Of the honors given was the Hardin and Clark Scholarships.

Luke Allen, political science graduate and previous Hardin Scholar recipient, said, “As a recipient of the Hardin Scholar award, I can confidently say that it is much more than just a financial figure. It represents a belief in our generation as future leaders and serves as a testament to the unity and longevity of the MSU community. It is an investment in not only someone’s education but also in his or her life for many years to come after graduation.”

Alexandria Nelson, environmental science senior and Hardin Scholar recipient, said, “I wasn’t expecting to get it. I am very honored and appreciative to my parents and to the geoscience department for pushing me and encouraging me. They have been integral and they have helped push me to where I am today and I couldn’t have done it without them.”

Nelson said her surprise from winning the award was because she never focused on being better than anyone else, rather improving herself.

“I don’t try to work harder than anyone else, I just do what I can to make a difference,” Nelson said.

Brendan Wynne, mass communication junior and recipient of the Clark Scholar, said winning the award wasn’t solely his own work. It was also recognition of the work others have invested in him to succeed.

“It feels a lot like what the speaker Luke Allen said: a vote of confidence. Even though this isn’t the Hardin Scholarship, it is still a recognition of all the hard work that people have invested in me,” Wynne said. “My professors and my friends and my advisors all invest a lot in me, and it is nice to be able to say, ‘hey, your hard work is all for something.'”

“[Receiving this honors] has been really exciting especially because this is my first year at the awards ceremony in general. For it to all come in my senior that I am getting two awards is very exciting. I am really proud of myself,” Atkinson said.

Atkinson won the Vinson Award for a short story she wrote for a creative writing class and said winning the award has given her more confidence to pursue her goals.

“I have always wanted to write a novel or something bigger, but I have never had the motivation to do it, so this is definitely the validation that maybe I can do it one day,” Atkinson said.

Mitch Kipp, political science freshman, won the Howard Farrell Community Excellence Award and said he plans to use the momentum from this award to try harder in his academic life.

“It is humbling to win [the Howard Farrell Community Excellence Award]. It is a relief, it has been stressful. I am glad it is all over now. It has really pushed me to try even harder for next year.”

Winners for Outstanding Student Awards for Scholarship, Leadership and Service 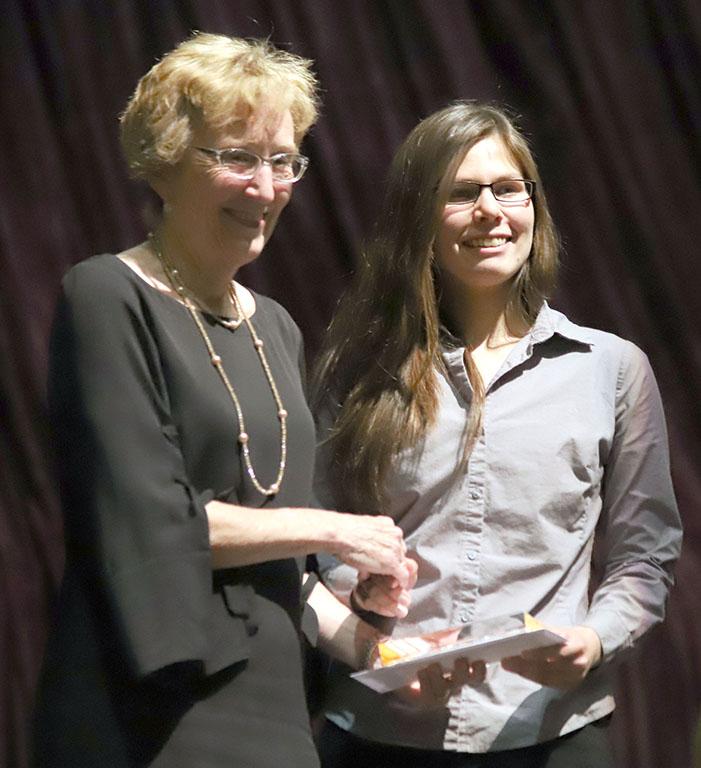