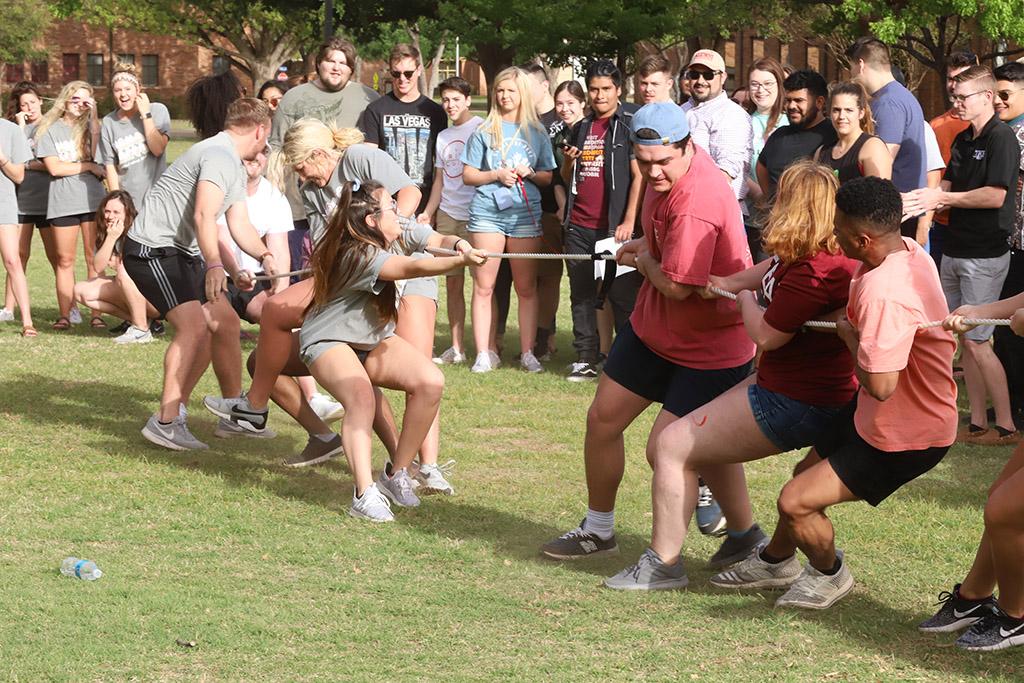 Fraternity and Sorority groups at Midwestern State University are competing in a game of tug of war during Greek Week on the Quad field on Fri. April, 13, 2018. Photo by Harlie David (Harlie David)

Fraternity and Sorority groups at Midwestern State University are competing in a game of tug of war during Greek Week on the Quad field on Fri. April, 13, 2018. Photo by Harlie David

Anticipation filled the air. Months after the international event concluded, the campus  olympics started on the warm Friday afternoon.

Drawing toward the end of Greek Week, staff from the Office of Student Involvement hosted Greek Olympics in the quad on April 13.

The event was categorized into three differing competitions: a game of tug of war, a ski relay in which four people had to relay race while all standing on two pieces of wood and a relay race.

Team Beta was the ultimate winner of the competition winning in both the tug of war and the ski relay.

The first of the competitions was the tug of war in which team Beta came out victorious beating teams Alpha and Gamma.

Tug of War Results (winner in all caps)

Next on the agenda was the ski relay. All four teams were lined up with the task of being the first to complete the relay. Each team chose eight people compete in the race. Four people were to stand on two pieces of wood and synchronize their steps walking across the field, switching members and then walking back to the starting line.

“It has been pretty competitive, it could have gone either way a lot of them, especially with the tug of war section,” Torres said.

Finally, the teams had to compete in a multi-faceted relay. A representative from each team first had to spin in a circle five times and maneuver a soccer ball through set up cones. They then had two members from each team complete a balloon toss relay race. After that, a member from each team had to pull another member in a chariot racing to be the first.

Marc Zographos, marketing senior, competed in the chariot race and said it reminded him out of shape he was.

“[The chariot race was] tiring. I am not as in shape as I probably should be, but it was fun, ya know,” Zographos said.

This was Zographos last Greek week and said he enjoyed it.

“This is my last Greek Olympics. It is good fun. It brings everyone together. [It is] kinda sad. I enjoyed it all. I am glad it turned out the way it is,” Zographos said.

“The purpose of Greek Week is kind of to remind everybody about the four pillars of Greek life, which are unity, leadership, scholarship and service,” Ramirez said. “So they do a little bit of everything throughout the week and it brings chapters together and it really hits on unity. It really hits on all of the tenants.”

To Trevor Snyder, mechanical engineering freshman, Greek Week is about the bonds between those in Greek Life and fixing the problems between different groups in Greek Life.