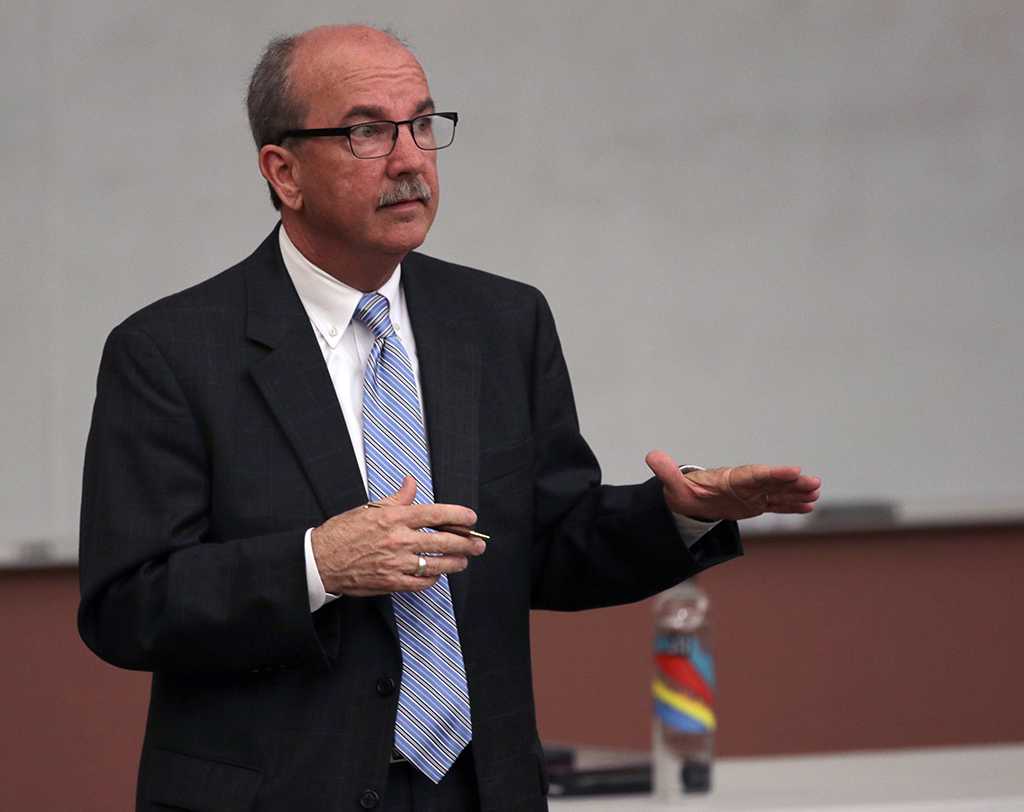 Fred Dietz, candidate for vice president of enrollment management, speaks at the forum interview for the VP position on April 13, 2018 in Dillard 101. Photo by Rachel Johnson (Rachel Johnson)

Fred Dietz, candidate for vice president of enrollment management, speaks at the forum interview for the VP position on April 13, 2018 in Dillard 101. Photo by Rachel Johnson

The search for the vice president of enrollment management is over as Suzanne Shipley, university president, announced in a postmaster email on April 19 that the search committee chose Fred Dietz out of more than 40 candidates to fill the position, effective July 1.

Shipley said in the email, “I know the campus looks forward to working with Mr. Dietz to increase enrollment at MSU Texas while maintaining the high academic quality and strong reputation we enjoy.”

As part of the candidate process for the open position of vice president of enrollment management, the second candidate for the position Fred Dietz attended a forum interview on April 13 in Dillard 101.

“[I applied because of] the opportunity to be the vice president and [the fact that] it’s a new position at Midwestern, so there is the opportunity to come in and really create something that hasn’t been created here and think that is attractive,” Dietz said.

For the duration of the forum Dietz took questions from the audience and answer questions faculty had concerning his thoughts on how recruitment and retention could be improved and the ways in which he would implement change.

One of the questions he was asked was concerning how he would sell the “broadness of the university”  in which he highlights the diversity of programs and directions available to students on campus.

He first addressed the trend of students gravitating toward the medical programs on campuses on previous campuses he worked for.

“In the last ten years, the dean [of Murray State] worked on [the idea that], ‘Everybody wanted to be pre-vet. Everybody wanted to be a veterinarian when they graduate,’ and [looked at] what was the opportunity to get those kids who can’t ‘cut’ that into another program, so we created a vet-tech program,” Dietz said.

Dietz described a solution in which the university would provide another direction in the same field keeping students on campus without the fear of failing rigorous courses.

“It is the opportunity where kids can still stay in the vet field and still be involved in it, but they’re not having to worry about maintaining a 4.o and taking biology, chemistry and all those upper level science classes. They can still have a hand in it.”

As director of residence life, Schulte said the office has a key role in recruitment and retention.

“Residence life and housing has a critical role to play with both recruitment and retention initiatives here on campus,” Schulte said.

To Schulte, is through housing that students make the choice on whether they will attend a college. One of the driving forces leading a potential student to make a decision toward attending a university is whether that individual can picture themselves living comfortably on campus.

As for ensuring retention increases, residence life has a goal in getting students connected to the university through Resident Assistants fostering good relationships with their residents.

“Additionally residence life is a key factor when it comes to student retention. What we know about retention at it’s most basic level is that students who feel more connected to the university are more likely to persist and to graduate.”

Linda Veazey, associate professor of political science, said she thinks it is good for the candidate to understand the school’s identity as a member of the Council of Public Liberal Arts Colleges.

“I would like to think that a good person for our position would have a good understanding of that mission and would think about how it works with recruiting,” Veazey said. “If we’re emphasizing that or not emphasizing it, I think it is an important part of our identity to understand.”