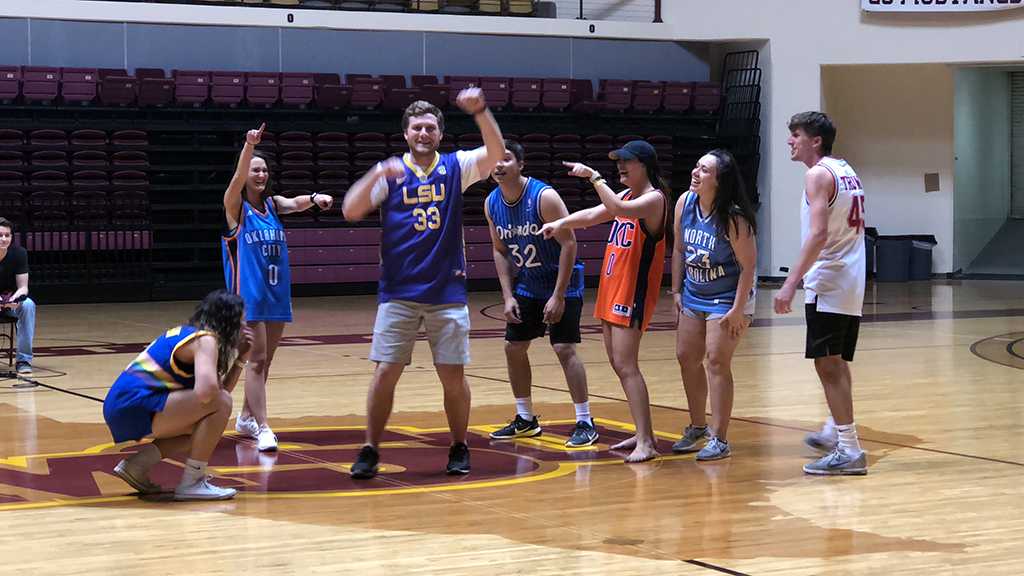 Team Beta performing “Stick to the Status Quo” from High School Musical at the Sing Song Competition on April 12.

Staff from the Office of Student Involvement hosted Sing Song as a part of Greek Week on April 12 in the DL Ligon Coliseum in which around 120 people attended.

For the event, the four teams competing in Greek Week – Alpha, Beta, Gamma and Delta – came with skits in which the teams choreographed lip syncing and dancing routines to Disney songs.

According to Madison Dodd, Order of Omega president and Sigma Kappa member, this “is definitely everybody’s favorite” Greek Week event. This year’s singing competition fell in line with the other events’ theme of Disney

“They basically have to come up with a skit and plan the whole ‘shebang’ on their own. They’ve got a lip sync, and they have to actually sing some parts of it.” Dodd said. “We only do four [teams]. We divided the Panhellenic, IFC, Multicultural Chapters into four different teams. ”

“It feels awesome, we were last place, but that kind of boosted us up a little bit so that’s good because we won,” Siler said.

Siler said the Sing Song competition is her favorite activity for Greek Week “because it gets everyone involved.”

Courtney Hoover, business management sophomore and Alpha Phi president, said she agrees and that she was responsible for the dance and lip syncing choreography of her team’s skit. Her favorite song to perform was “Let it Go” because “it was fun” practice, and to “have a good time” with friends.

Hoover urged students to participate in and attend the different Greek Week events.

Hoover said. “People should participate because it’s a great way to get involved on campus like Greek life is really big here and we love to get out here and show what we like to do and have fun. So, it’s cool to have other people to come watch that too.”

Next up in @MSUGreeks Sing Song Competition, Team Delta! pic.twitter.com/tJccHACCAG