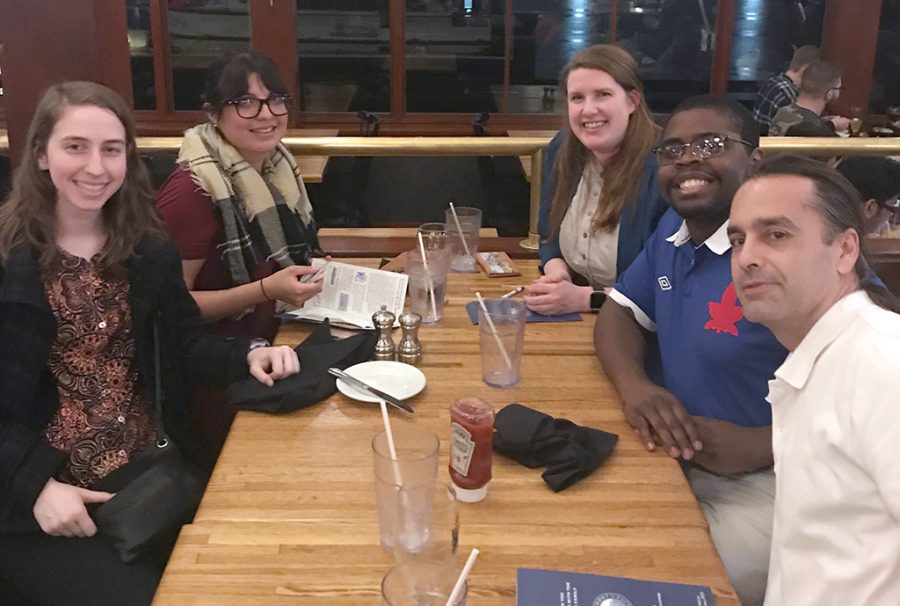 Three students and four professors presented at the International Studies Association conference in San Francisco from April 4-7. Steven Garrison, chair of the political science department, said this is the highest number of MSU students and faculty members who presented at an ISA conference.

“It was a huge success,” Garrison said. “Three faculty members presented papers at ISA, including two undergraduates, a graduate student and an adjunct professor. That’s the most represented MSU has ever had at ISA.”

Natalia Zamora, political science and global studies senior, was one of the undergraduate students.

“This was my first ISA conference,” Zamora said, “This was also my first time in San Francisco.”

Garrison said it is unusual for undergraduate students to present papers at ISA or other conferences at that level.

“My favorite professor told one of my students that they have summarized their paper better than her graduate students,” Garrison said.

“First, you have to write your paper and you have to find something that deals with international relations. That’s something that many have not looked at quantitatively, so I was able to put together other people’s research and create my own paper that was unique,” Harris said. “The people I presented with were also researchers that had a more specific goal to achieve equality for women. I was around great minds that had PhDs and were Harvard students.”

Garrison said ISA was the first academic conference he was a part of. He presented a paper with his former professor in 1996.

“She made me realize how important it is for teachers to take their students to these conferences,” Garrison said.

Zamora explained how nervous she was giving a presentation at the ISA conference.

“I was pretty nervous and I did not cope with it very well,” Zamora said. “But one thing that could have helped would have been to be extremely prepared in advance.”

Zamora said the most important thing she had learned from ISA was preparation.

Zamora explained the comparative case study she has conducted with Linda Veazey, associate professor of political science, as well as another student. She also explained the future of this research project.

“We did a comparative case study with another student on gender-based violence in both the Syrian Refugee Crisis and the Northern Triangle Migrant Crisis,” Zamora said. “We will also be presenting our research paper at the Celebration of Scholarship this April.”

Harris also explained the project she was a part of. She also said that she had to change it because her original idea was “too broad.”

“I wrote my paper over human rights treaties and their effects on education for women and girls,” Harris said, “I wanted to do one on how international treaties affects on human rights, but that was a little too broad.”

Garrison explained his research project which was different than most of the projects he had previously done.

“I did a paper on how Model United Nations programs are ways to advance political science and international relations programs,” Garrison said. “Most of my research has either been on foreign policies of small states or quantitative studies of conflicts.”

Harris said her mentor, Brandy Jolliff-Scott, assistant professor of political science and coordinator of global studies, was vital in preparing her for the conference.

“I worked closely with Dr. Jolliff-Scott and she helped draft my first conference paper,” Harris said. “When I got here, I already had my paper and presentation ready to go. When I got to the conference, I got a lot of support from Midwestern and I did a fantastic job.”

Garrison said his former professor was also a valuable mentor to him in preparing for his first ISA conference.

“She taught me what a conference is like and taught me how to do a paper and a presentation,” Garrison said. “She introduced me to people and took me to the cocktail parties like I did my students.”

Zamora said her favorite part of ISA was spending time with the MSU students and faculty.

“My favorite part of ISA was spending time with our team,” Zamora said. “It was also a good experience to prepare us, in case we want to go into academia.”

Harris said her favorite part of ISA was being around the different students and faculty members who presented their papers.

“I enjoy being around great thinkers and people I can associate with. Even if I don’t agree with everything they are saying, there is a manner of respect for each other,” Harris said.

Garrison said his favorite part of ISA is being exposed to new ideas and research.

“I like the new ideas and being exposed to new research before it is actually published so you can know what is out there ahead of time,” Garrison said.