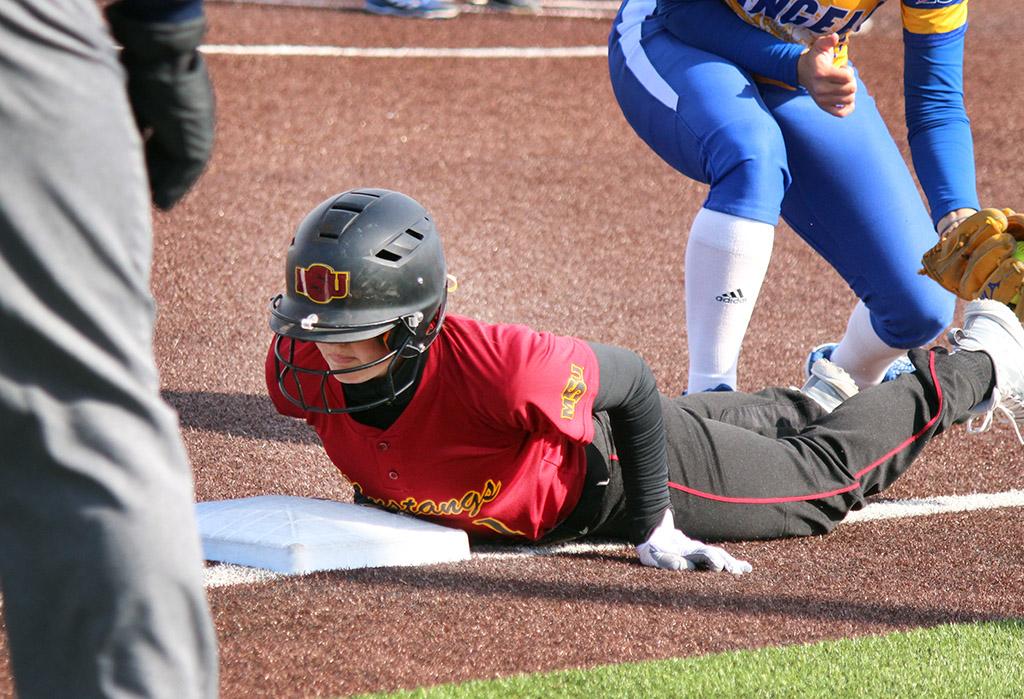 Caycee Griffin, biology freshman, slides back to third and is safe, after the opposing team catches her teammates fly ball, Saturday April 7, 2018. Photo by Rachel Johnson

Caycee Griffin, biology freshman, slides back to third and is safe, after the opposing team catches her teammates fly ball, Saturday April 7, 2018. Photo by Rachel Johnson

Softball falls to San Angelo despite no in-game errors

“We played one of the best games we have played all year,” Gracie Bogle, pitcher/first base and kinesiology senior, said. “We didn’t have any errors on the board, and there was nothing else we could do. We were hitting the ball, just not timely enough and our pitching was good. Sometimes you can give it all you got and still lose a ball game.”

At the top of the fourth inning Lauren Lindgren, outfielder and elementary education sophomore, caught a pop fly to get the first out. San Angelo was able to gain one run in the fourth inning. At the bottom of the inning, Marley Eller, outfielder and pre-med freshman, made it home when Griffin was at bat. At the top of the fifth inning, Griffin made two outs and Lancaster made the third out. At the bottom of the inning, Lindgren walked on base after getting four balls. The team got three outs before Lindgren was able to make it to home. The sixth inning both teams made three consecutive outs letting neither team a chance to run the bases.

“All-and-all we had a good game, this was one of the few games that we had no errors,” Amanda Thomas, catcher and sports & leisure senior said. “Sometimes it just doesn’t fall our way, but we did very well.”

At the top of the seventh inning, Lancaster threw another strikeout. In the bottom of the inning, the team had an opening to take the win. Griffin got a hit and made it to first base. Following her was Tucker Caraway, utility player and nursing junior, was hit with the ball and walked to first base, sending Griffin to second. After her fourth ball, Lindgren walked to first base, fully loading the bases. Thomas was next at-bat with the based loaded. She hit the ball and ran towards first, as Griffin ran towards home San Angelo got her out. They were able to make a play and get two others out completing three outs with one play.

At the top of the eighth inning, San Angelo had two players make it home. At the bottom of the inning, no one was able to make it on to base completing the score of 1-3.

“We played better as a team and we were ready to play right off the bat,” Eller said. “Our energy was up the whole game, sometimes you play the best you can and still fall short.”

The team’s record is 13-19 after the players lost the series with San Angelo. The team will return to Mustangs Park April 20 playing Tarleton State for the last series before the Lone Star Conference championship. 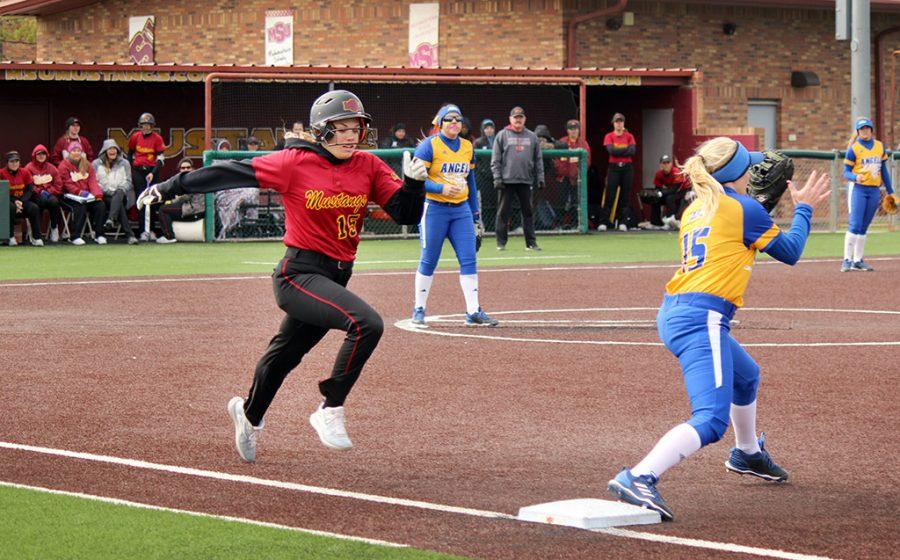 Gallery|6 Photos
Rachel Johnson
Kelsey Eropkin, psychology sophomore, gets an out running to first base during the game against Angelo State, April 7, 2018. MSU lost to ASU 3-1. Photo by Rachel Johnson