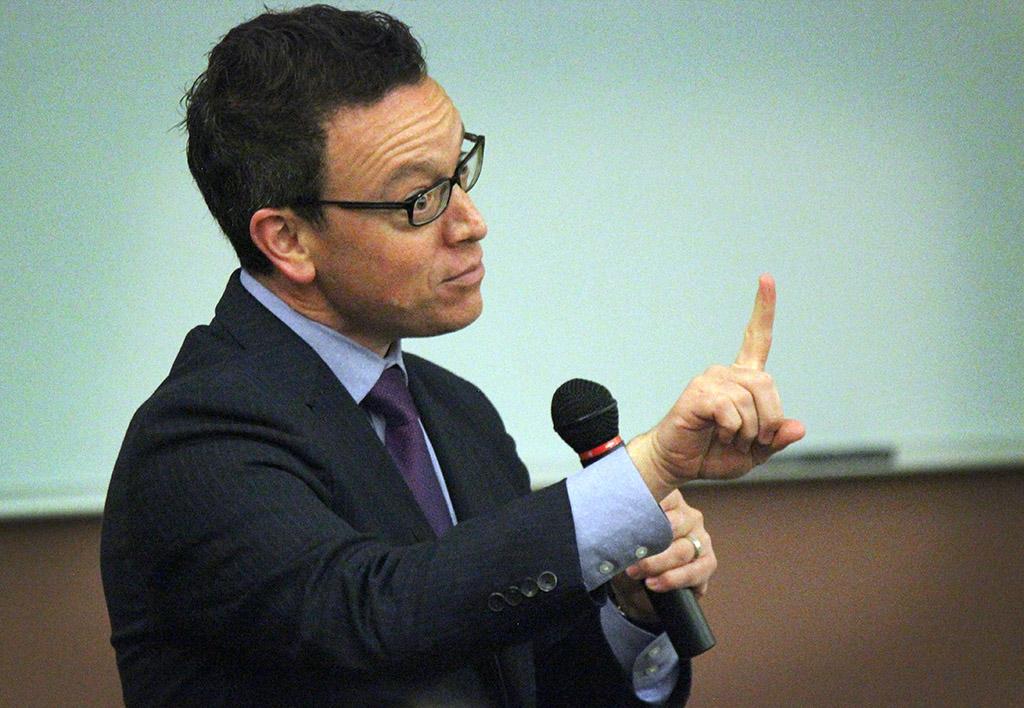 Jeffrey Bucholtz, guest speaker, hosts Yes! Yes! Yes! A Conversation about Consent & Sexual Violence in Dillard 101 where about 135 people attended and were educated on different types of sex and sexual violence and how they start conversations with each other. Photo by Rachel Johnson (Rachel Johnson)

Jeffrey Bucholtz, guest speaker, hosts Yes! Yes! Yes! A Conversation about Consent & Sexual Violence in Dillard 101 where about 135 people attended and were educated on different types of sex and sexual violence and how they start conversations with each other. Photo by Rachel Johnson

A packed classroom. The presence of anxious chatter in the air. The lesson is clear: end sexual violence.

To educate students on the various aspects surrounding sexual violence, the Office of Student Involvement invited speaker Jeffrey Bucholtz to give his presentation “Yes! Yes! Yes! A Conversation About Consent” on April 5 in Dillard Room 101.

According to Matthew Park, dean of students, Bucholtz was already in Wichita Falls giving a presentation at Sheppard Air Force Base when they invited him to speak on campus.

“It is a hugely important topic, nationwide and on our campus,” Park said. “We have seen that there is significant energy and passion and emotion for this, and we know that it takes a holistic community-wide effort to affect positive change.”

Bucholtz presented the idea that sexual violence needs to be changed through changing our “environment” by the way people perceive sex and sexual violence.

“If we want to end sexual violence, we have got to start thinking about how the environment facilitates it,” Bucholtz said.

He asked the audience to discuss with him the different kinds of sex. Bucholtz presented sex on a spectrum: good sex, sloppy sex, bad sex, regretted sex and sexual violence. He asked members of the audience to give feedback with each topic. Through this, Bucholtz explained there is a distinct line between two items on the spectrum, regretted sex and sexual violence, and that line is choice and consent.

While these types od discussions are important to the campus, Ellanor Collins, theater junior, said she thinks although the movement on campus is to bring awareness to sexual assault is progressive and beneficial, students ultimately do not care about these issues unless they are required to.

“I don’t think they care most of the time unless they have to come,” Collins said. “By coming, they end up bringing two people or one person.”

To explain this unfortunate happening, Bucholtz pointed out the perception of consent is also skewed, so while students know that consent is necessary, they don’t take ownership of situations because they blame policies for allowing the lack of concern.

“Basically ‘no means no’ is the policy,” Bucholtz said. “You do whatever you want until someone else stops you, but I want to point out something really important to you and that is ‘no means no’ is a ridiculously terrible policy for consent.”

After an exercise in which Bucholtz asked members of the audience to guess how rapists view men, women, sex and consent, he illustrated that through media and people’s perception of sex, sexual violence and consent our environment has been foster to give those who commit sexual violence a cover to hide behind.

He showed various media clips from movies like “Superbad,” to songs like LMFAO’s hit song “Shots,” both of which present the idea that it is acceptable for men to get women drunk enough to have sex with them. He used these clips to show that attitudes toward sexual violence are normalized in the media.

Several student organizations attended the meeting to support unity on campus and the emphasis administration members are putting on correcting sexual misconduct.

“I am part of the football team, and we came to show we are supporting this movement, that we need spread awareness about sexual assault, especially for it being sexual assault awareness month,” JP Cognasi, mechanical engineering junior, said.

While some students were impressed with the turnout, Abbie Defore, pre-veterinary and chemistry sophomore, said she was disappointed in the lack of presence at the event.

“Why is this still a thing when we can be better and we can be seen as the ones who were morally correct?” Defore said.