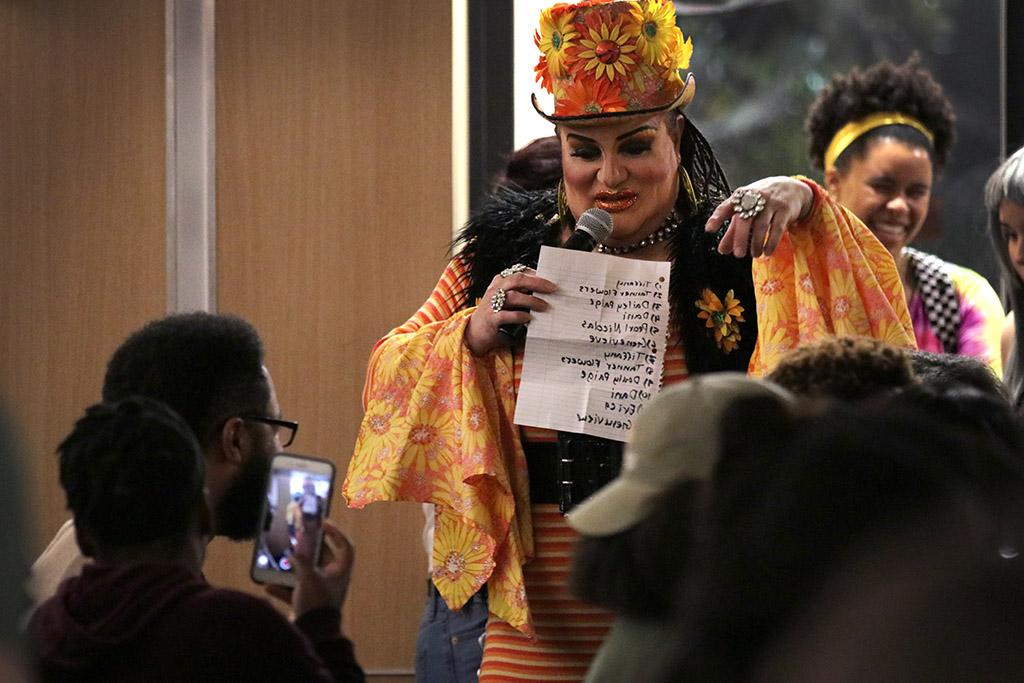 Tiffany Addams, Drag Show Host, walks around Legacy Multipurpose Room bringing different audience members into her jokes and stories that she told as she introduced each drag performer at the third annual P.R.I.D.E. Drag Show, April 5, 2018. Photo by Rachel Johnson

The third annual People Respecting the Identity Diversity of Everyone drag show brought in about 100 students to the Legacy Multipurpose Room on April 5. The event had a few falls and slips along the way but kept the students roaring with applause until an aghast gasp from the students filled the room.

Host of the evening, Tiffany Addams, led Jordan Walker, undecided sophomore, to the front of the stage when he decided to grab her wig, leaving several students outraged. Walker said his intentions were not to offend anyone but to have fun and play along.

“My intention was to play along with her,” Walker said. “She was calling me sexy, so I was like ‘let me call you sexy back,’ but it was all fun and games, so I was going along with it.”

Walker said he apologized to students after the show.

While slight mishaps occurred throughout th evening, Logan Haddock, English junior, performed as Dailey Paige, and said he felt it was a great opportunity for him to begin his brand while still being able to support the local LGBTQ+ center.

“For PRIDE to have this is really great, especially since the donations are going to Opal center, which is the local LGBTQ center here in town,” Haddock said. “Not only are we promoting our brand, but we’re also helping promote a place that LGBTQ teens can go to and feel safe. So this has just been a great experience.”

During Haddock’s first performance, he obtained a minor injury and was unable to go through with his entire second number.

After a few technical difficulties with the sound systems in the Legacy Hall Multipurpose Room, Eliza Cameron, president of PRIDE and English sophomore, said she was happy with the end results.

“We got a lot more people than we expected, which is amazing,” Cameron said. “We have had a few technical difficulties, but so far, I think it’s gone really well, and I hope everyone is enjoying it.”

Making the drag show more available to students and introducing a concession stand is what Cameron said she believes had an impact on bringing more students in.

“I think we’ve definitely made it more available to people,” Cameron said. “We probably had smaller crowds in the past because not very many people knew about it, or it seemed kind of like an exclusive thing, so it’s definitely expanded and we got more people.”

By introducing a broader variety of events, Cameron hopes to make students more aware of the student diversity on campus.

“It’s a great example of diversity on campus,” Cameron said. “This kind of show is the kind of thing that’s popular, probably, in the bigger cities with the bigger universities, but it’s great to bring this to something in a smaller community where you don’t see as much LGBTQ representation. To bring this to a larger audience is really great, and it makes people more aware of  the kind of things that people like.”

Charlotte McDaniel, nursing sophomore, said she is no stranger to the annual drag show and admits she saw improvement in this year’s show compared to the shows in the past.

McDaniel said she enjoyed the show and felt the only fault was the minor technical difficulties that can be worked on for the next show.

Drawn in after noticing a crowd of students lined up for the show, Kenasia Woods, Athletic training freshman, said she enjoyed the show.

“It’s positive because it pulls a lot of people together and not a lot of us knew about it,” Woods said. “We were kind of walking and saw everyone and it kind of made everyone gradually join in and see what this club does.”

Woods said she feels PRIDE has a positive impact on the campus and enjoys how their events affect the campus in a “positive way” and aren’t “forced” on anyone.

“They do things to kind of get everyone involved and it isn’t so strung, but they make it fun,” Woods said. “So it’s not really the harsh like, ‘Wou have to believe this.’ It’s more the fun like the, ‘We’re this and just come hang out with us.’ They make it fun.”

“Maybe have like an amateur session,” Woods said, “and pull people from the crowd and make them do it, I feel like that would be fun.”

As he continues to practice his performances, Haddock said he sees himself doing future performances and has enjoyed the opportunities PRIDE has opened for him.

“PRIDE is probably one of the most inclusive groups on campus,” Haddock said, “Whenever I stated interest they were like, ‘yeah we want you to come, we want you to join.’ This has just been a great experience. I’m definitely planning on doing this next year and I’m hoping to get started at The Mix which is a club downtown that’s open to drag shows.”

A sneak peak of tonight’s Drag Show if you haven’t made it down to Legacy yet! https://t.co/43rFnxuiOb 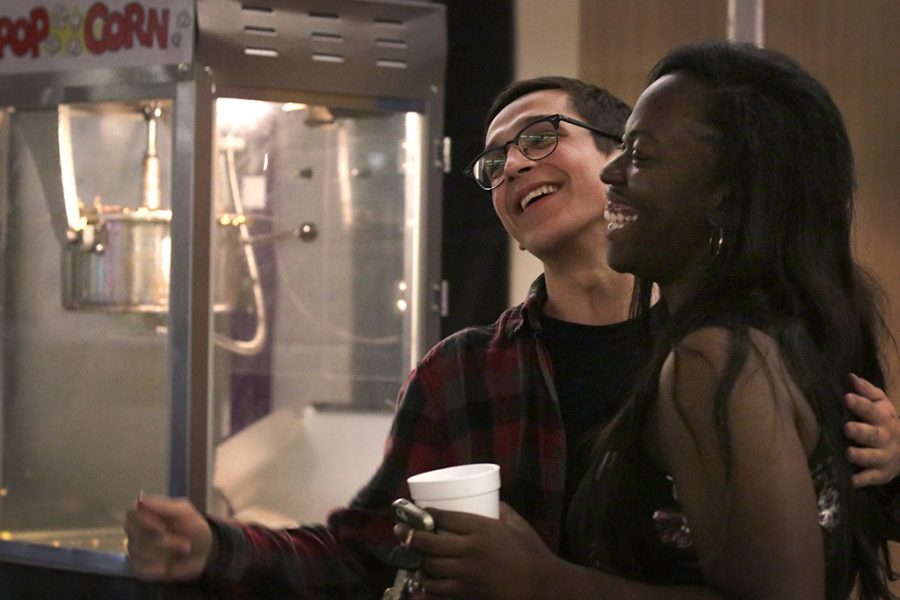