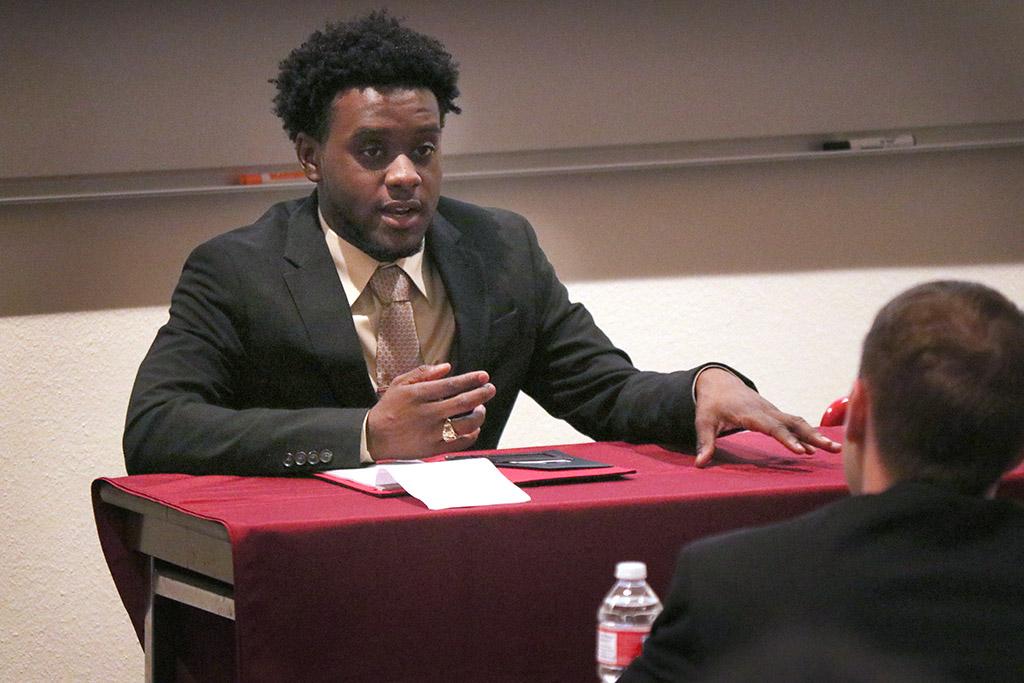 With 6.6 percent of the student population voting in the Student Government Association election, Maria Peña, president, said she is “disappointed” in the turn out.

“I am disappointed in the turn out of students who voted, and I think that has to do with our climate on campus.” Peña said. “I can’t really speak on a personal level for the campaigns, but I do think that I didn’t see much physical campaigning. I saw a lot of social media campaigning, and while that is effective at some institution, you don’t really reach the students who don’t have social media and Twitter. That’s where I saw all of the campaigning happening—on Twitter.”

When Peña ran for SGA president, she said she campaigned actively across the campus to ensure her name and platform were out for the students to physically see and hear. This, she said, is vital for students to connect to the administration that will speak and make decisions on their behalf.

Ellie Gunderson and Steven Ehlert, political science juniors, ran for 2018-2019 SGA president. Gunderson won with 53 percent of the vote which is 3.5 percent of the entire student population.

“That’s a really small percentage of people that voted,” Peña said. “That says a lot about the people that they reached, the students they campaigned to. Did they make an effort to campaign to all of the students and not just those who have a big voter block? That’s something that I feel should be addressed.”

Because so few students participated in the elections, Peña said it’s important to discuss pressing issues with students in organizations outside of their community so students feel heard by administration.

“I feel like a lot of the concerns we saw at the debates are things that are going to resonate with the next administration,” Peña said. “These are valid questions that I feel the students who may not be happy with the turn out are going to hold her accountable to—same thing if Steven would have won.”

Each year the administration has to learn how to tackle organizing and connecting with student organizations, and Peña said since Midwestern is “a really unique school population in our region,” the current administration did their best to be as is inclusive and diverse and welcoming of everybody” and hopes that is echoed though to the next administration. Along with that, Peña emphasized the importance of focusing on accomplishing tasks that can be met within a year.

“The candidates both presented interesting ideas, whether or not they are actually feasible or doable, is another,” Peña said. “They both come from interesting backgrounds that gives them some kind of insight that could benefit us as students. Student athletes, for example, seem very detached from the rest of us who are very involved on campus, and the residents are connected with Steven and that’s a very different demographic. Ultimately, it’s up to the new administration and what they will do.”

As the 2017-2018 term approaches the end for leaders in the Student Government Association, both future and serving leaders reflect on their roles.

During the SGA meeting on April 3, Preston Busby, future SGA vice president and criminal justice junior, said he viewed the meeting in terms of how he would run future SGA meetings.

“For this meeting it was really about me paying attention to how Damian ran things and taking notes on how I would run meetings as vice president,” Busby said. “Next semester, next year, I won’t just be representing my organization, I will be representing the entire student body, the entire [body of] senators and every organization on campus and being their voice as well.”

As for serving the SGA vice president Damian De Silva, business management graduate, he said he is happy with Busby.

De Silva said, “Given that he was very involved, he certainly is good about time management, there is no question about his commitment to MSU and toward the student body. I am completely happy with him.”