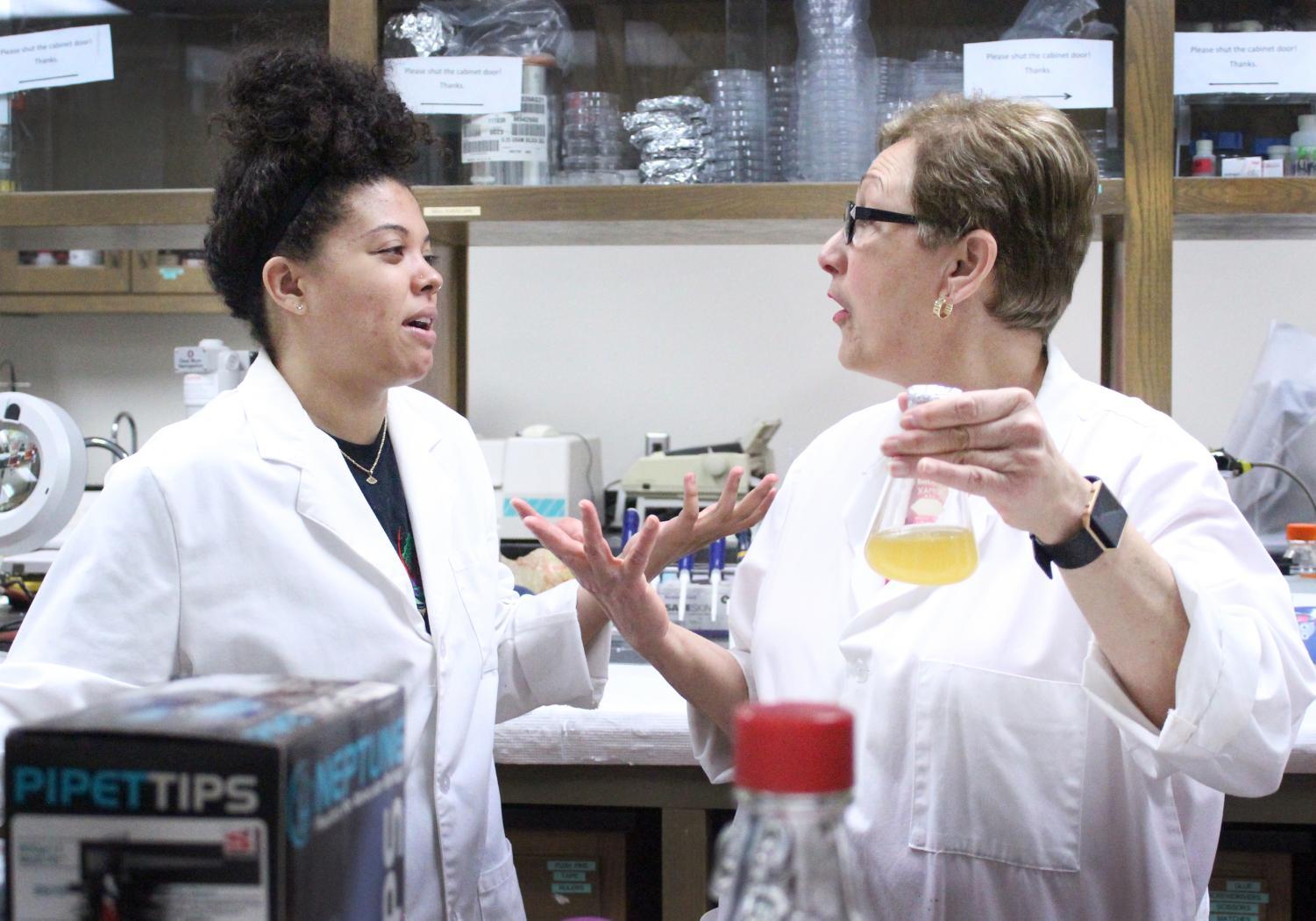 Magaly Rincon-Zachary, biology professor, talks with one of her students, Mi’Kaila Billinger, biology and Spanish junior, about the EURECA reserach project they are working on in the lab, about the results they’ve gotten so far and possible directions they could go forth with, April 11, 2018. Photo by Rachel Johnson

Magaly Rincon-Zachary, biology professor, talks with one of her students, Mi’Kaila Billinger, biology and Spanish junior, about the EURECA reserach project they are working on in the lab, about the results they’ve gotten so far and possible directions they could go forth with, April 11, 2018. Photo by Rachel Johnson

A white male and an American-Indian woman are sitting at a table in the Mesquite Dining Hall – both are staff on campus. They both teach. They both hold office hours. They both advise students. They do the same job and the casual observer might assume they are paid the same. However, one makes more than the other. But not for the reasons that might come to mind.

While stereotypes of gender and ethnicity pay gaps exist in the workforce, both have little bearing on campus salaries according to some faculty, although data obtained by the MSU Office of Administration and Finance do show some differences.

“The key factor is our area of expertise,” Ronald Young, associate professor of accounting and management information systems, said.

Young, who joined campus staff in 2015, tops the list of highest paid associate professors in the accounting department not serving in an administrative role, making $134,653 annually. His female counterpart, Susan Anders, makes $127,442 and also joined staff that same year.

Some faculty members said younger faculty members were being hired at higher salaries than those who had been here for a long time, sometimes decades. In fact, newer employees do tend to make more than those employed at MSU for decades. Only 35 percent of the time did longevity correlated with salary.

“Midwestern was wanting to add a program in energy management and there just are not many accounting professors who know a lot about the oil and gas industry. I happen to be one of the few that does. And so well at the end of the day, basically I’m getting paid as much as I can get out of them,” Young said.

Some gender differences were apparently. The median female salary is $40,223 annually while the median male salary on campus is $57,001. However, many more males have been employed at MSU for a longer period of time explaining at least part of the difference.

Young said, “I’m sure Susan is getting paid as much as she can get out of them. Her area of expertise is tax and while that’s also a specialty area, it’s one where there a0re more people so, I think it’s mainly just that area of expertise that makes the difference.”

Young said a person’s title should also be taken into consideration. And, for both faculty and staff, those with higher ranks were paid more, often significantly more.

“The professorship contributes a chunk of our salary and so the professorship I’m under may have been better funded than the one she’s under. I don’t know that but that’s certainly a possibility,” he said. 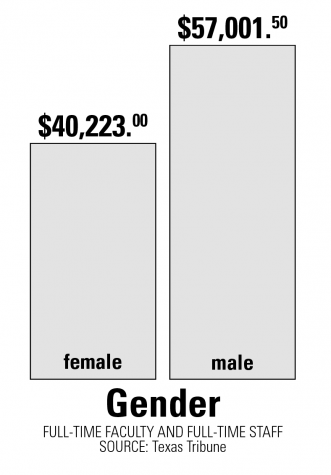 Campus data shows that on average, associate professors make $75,279 annually and men hold 31 out of the top 50 spots.

But Young said in higher education, especially in accounting at the university level, salary inversion or situations in which the starting salaries for new recruits to an organization increase faster than those for existing employees is also another important factor.

“If you compare our salaries to people who’ve been here a long time, they are higher. When you go out and hire people in you have to pay a competitive market salary and people who have been here a long time tend to fall behind. I’d been at my previous school 24 years and I was one of the lower paid people in our department. I would not have come here for less than I was offered.”

“At MSU it’s really hard to compare jobs even with the same title as assistant directors because responsibilities can vary so greatly [and] I think responsibilities would play a role in that,” she said.

Peterson, who joined faculty in 1996, said, “A department may have more budget available than another department, but I really think it’s probably more on the job than the available budget that each department has…overall we have a pretty lean budget for MSU not just for salaries, just we don’t get much from the state than we used to.”

“A salary analysis for every employee [was conducted and was] supposed to take into consideration our duties and years in the position of what we do in order to establish a better salary which at the end didn’t change that much for anyone because the job descriptions are not updated.”

Ruth Morrow, Bolin distinguished chair of piano and professor of music, said  sometimes it’s hard to tell if gender is a factor because every hire is individual and there has been a change in administration on every single level.

“There are probably different philosophies of how to hire. I would say that there’s one person who came in and I was surprised to find out how much they were making. I don’t know in terms of gender- that’s one isolated incident. I do know that there are faculty, who got what for a raise…I just can’t be bothered with that. You know life’s too short.”

Morrow who makes $79,059, said her concern is with compression or the small difference in pay between employees regardless of their skills or experience.

“I’m already full professor, there’s nowhere for me to go and yet when I had each of my promotions…I got half as much money as the people are now getting and so we’re going to be leap frogged by people. Also the last time and I can’t remember, it was at least 15 years ago  that there was a compression, [which is people] coming in at higher pays and there’s also inversion when people come in at a lower grade actually making more money than you do.” 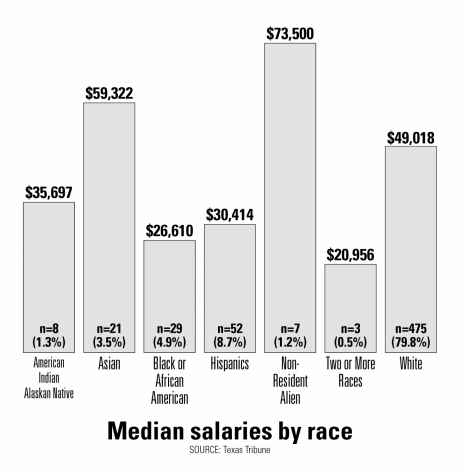 While faculty and staff shared views on gender, the idea of ethnicity influencing salaries was not popular.

Eighty-seven percent of the individuals employed on campus are white accounting for all three maximum $310,000, minimum $13,250 and median $47,922 salary for employees. Neither of the highest paying salaries for each ethnicity in the remaining thirteen percent reach half of the highest salary for white employees.

Morrow, said, “There are things besides ethnicity that are a more primary factor for salaries. Such as experience and how long their contract is nine months or 12 months.”

Morrow who is the highest paid American Indian with an annual salary of $79,059, said her doctorate, performance on the job and overall experience is what earned her her salary.

“I am good where I am. Everyone wants a raise but the budget has been set for the year although the benefits outweigh a higher paying job without those benefits,” Clifton said.

Adam Lei Yung-Chou, Bridwell distinguished professor of finance, said, “The professors discipline area is the most important factor for determining salaries. We all have a PhD. It’s about where your PhD is at.”

He said his ethnicity has not affected his ability to teach and although his accent has created some difficulty from time to time, students have gotten accustomed to it.

But Assistant Director of Admissions Hugo Erazo said ethnicity does have some impact on salaries.

“I started here and other universities would pay way more for somebody that’s bilingual to have in their office. I’m paid the normal and there’s no way for [for that to change]. In other offices with caucasians, I have seen people males especially, that they have a master’s degree and they get a salary increase for that. Here for me I got a master’s degree, I requested [a raise] and they said no and it happens for females too.”