What was, what is, what could be: Men’s basketball 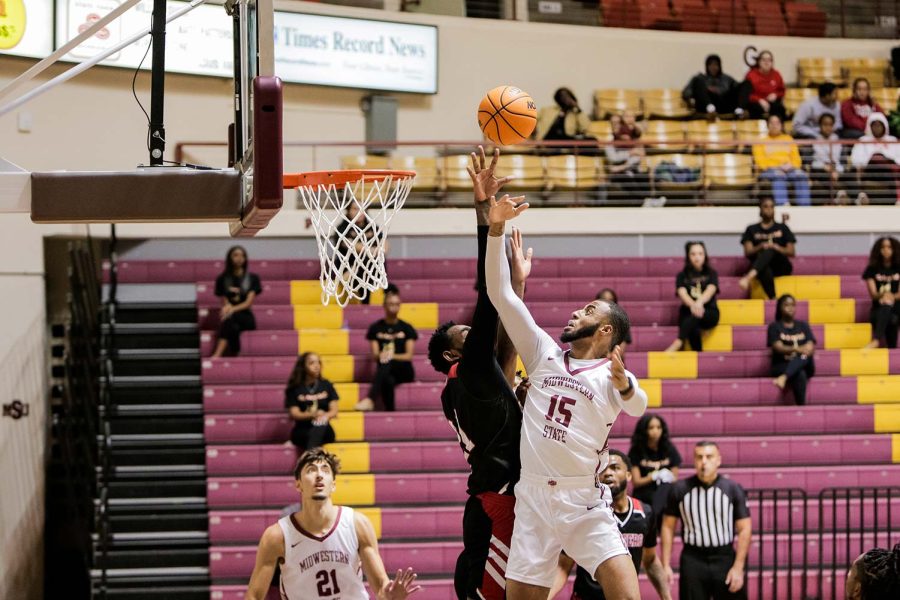 Psychology senior Jermane Carter reaches to toss the ball in the hoop before an opposing Northwestern Oklahoma player can block, Nov. 17.

MSU basketball in full swing, and the men’s team took to the court in D.L. Ligon Coliseum Thursday night to continue their season. The Mustangs hope to build on last season’s 16-15 record and have their eyes set on both a conference and eventually a tournament run.

Last year, the Mustangs started slow but fought hard to finish one game above .500. Head coach Justin Leslie said the way the team came together at the end of the season helped to set the tone for how they wanted the 2022-23 season to go.

“We finished really strong, I think we finished 11-4 to close out the season. Won a couple games to go into the conference tournament to really go into the offseason with a high that carried over and lead to a fantastic offseason for the team. Leaves us really excited going into this season and what we have in store,” Leslie said.

The Mustangs hoped to use the strong finish to the season to carry momentum into 2022.

Hopes of picking up where last season left off have faded, as the Mustangs sit at 0-3 following a close 67-64 loss to Northwestern Oklahoma. That game comes on the heels of two losses from a road trip to Colorado. Despite the poor start to the season, Leslie said the trip to Colorado served a different purpose; helping the team get used to playing on the road.

“Part of learning how to win is putting yourself in situations where you’re going to be uncomfortable and have to grow,” Leslie said, later adding “Getting on the road and getting away from our routines and our level of comfort that we have here is really important for just the growth of the individuals on this team, but also the growth of the team and the program.”

Leslie said he hopes tough road environments will bring the team together and increase their teamwork. While the start to the season hasn’t been ideal for the Mustangs, senior guard Jace Johnson said the team is responding well to the season so far, and is a close-knit group that is learning to play both with and for each other.

“That’s something special, I can say on a lot of teams I’ve been on, have never been as close as we are. We do everything together. Eat together, go to church together, just hang out in general. It’s that brotherhood that’s going to help us on the court as well. Just knowing that that’s something I can rely on, the man to my left, the man to my right, I can rely on them when things get rough,” Johnson said.

The Mustangs are gearing up for another tough road trip, this time to Idaho to face Central Washington and Northwest Nazarene. After that, MSU opens its conference play with a trip to Dallas Baptist.

Ogechi said he hopes the team can climb higher than its preseason ranking of fourth in the LSC.

“Hopefully we can improve on that and be top-three. Without a doubt I think if we learn to play with each other, that’s obviously a realistic goal for us,” Ogechi said.

Johnson said the team’s goal is to finish highly in the LSC before mounting a run through the NCAA D2 tournament. He said that if the team is able to do so, it will be due to a unified effort and vision.

“It’ll happen because we buy into everything we’re supposed to buy into and play for each other and not for ourselves individually,” Johnson said.

“I really truly believe deep down that we have the team to win the whole conference,” he added.