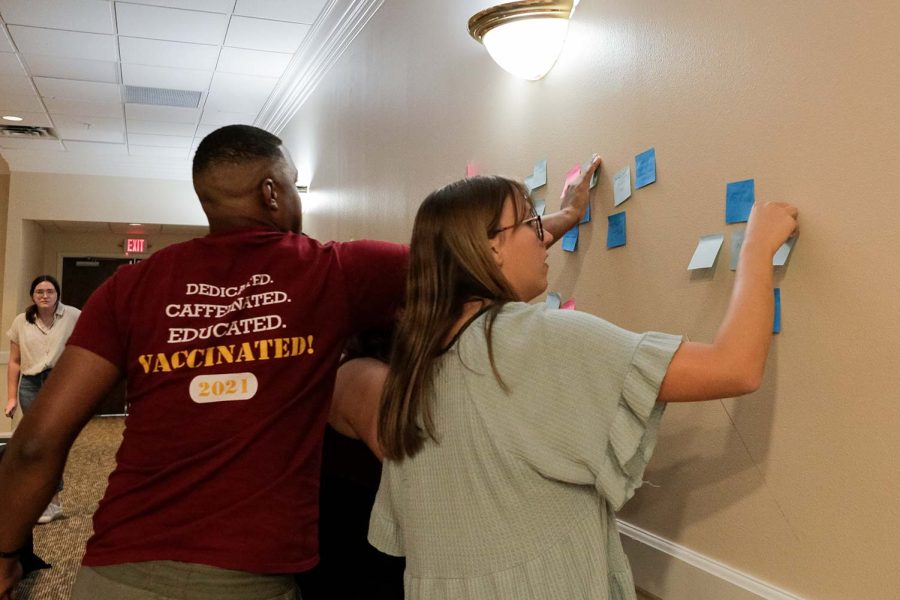 A Post-it Note activity helps SGA understand what students to change on campus, such as food options, parking, academics, and more, Sept. 6.

A decision to change

Change wasn’t just in the air at the latest Student Government Association meeting Tuesday night – it was a deliberate theme, and has been since the summer. Foremost among the changes for the SGA is an updated student constitution that seeks to better represent the student body and better define the roles of student government. The revised constitution will have to be ratified by an SGA vote, then will go to a student body vote for final approval.

Zetta Cannedy, political science and global studies junior serves as secretary of the SGA. Cannedy, who was involved with the revision process, said the decision to overhaul the constitution was spurred by a number of previously identified inadequacies that would be too hard to address through the amendment process.

“I actually helped revise the last constitution, but we kind of found that there were so many issues, and that there were just kind of so many revisions that needed to be made, the amount of amendments that we would have to pass was just too great,” Cannedy said.

Gabriella Pettijohn, economics senior and student body president, also aided in the revision and echoed that the document, originally written in 1974, needed an update.

“We took a hard look at our previous constitution and realized that there were some errors, and more than anything we wanted to start fresh with a new document. We thought it was important for students to feel very represented and seen in a form of change through student government, so we thought that was the most effective way,” Pettijohn said.

While the proposed new constitution features some large changes like the inclusion of a diversity, equity and inclusion statement, many of the changes were small and reflective of a need to clarify and redefine both the constitution and the roles outlined in it. This included a new table of contents and the changing of several SGA position titles.

Eric Queller, management junior and vice president of student government, said making sure the constitution makes sense is part of how the SGA is able to be a clear voice for students.

“The real reason why we wanted to rebrand and redo our constitution is to kind of condense and solidify. This is the organization at MSU that is primarily responsible for reporting to university administration and what the students want and need, not any other governance group,” Queller said.

But perhaps the most impactful item on the new constitution’s agenda is a change to the college senators program. Instead of electing student senators for the freshman, sophomore, junior and senior classes, the SGA hopes to implement a new system in which each college on campus will be represented by two senators in the student senate. For example, the Dillard College of Business would be represented by two senators, as would all other colleges across campus.

“One thing that I think was critical is going to be the college senators. Having more representation at Dillard. Two senators come here, they show me what is happening at Dillard, what are their problems. Because their problems are widely different than Fain Fine Arts, and very different issues than Prothro-Yeager. And all of those issues need to be addressed, and I haven’t seen that in my three years here at Midwestern State University,” Queller said.

A common refrain among the SGA leadership said the goal of the proposed change is to increase academic representation in university-level student leadership positions. The new system is based on the belief that senators from each college will be better able to identify and act upon the needs of more specific groups of students, rather than one senator representing the entire freshman, sophomore, junior or senior class.

But the SGA doesn’t plan to stop at codifying the new senator system and polishing the framework of the constitution.

“The number one thing, that we haven’t written yet because we do want it to be a student body-written document, is the student bill of rights,” Cannedy said.

Apart from change and student representation, one other theme echoed throughout the meeting was taking advantage of MSU’s centennial to build toward the next 100 years.

“More than anything, we’re trying to make a change for the centennial that we can go forward into the coming years. We want to make sure that we’re accessible to the student body, and we’re in a place where they feel comfortable coming to us and expressing their concerns,” Pettijohn said.