MSU football 2022: past, present and future 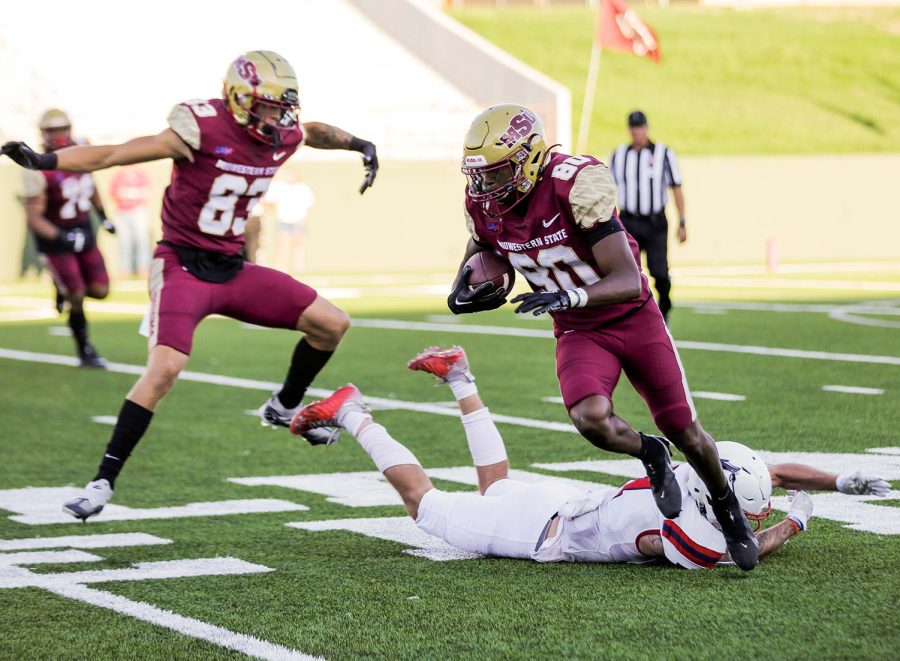 MSU is coming off of what should have been considered a successful season; seven wins against only three losses, and a 6-1 mark in conference play. It was hardly the best Mustangs season in recent history, but it was enough to win the conference. Unfortunately for the Mustangs, it wasn’t enough to secure a playoff spot, as they had to sit at home while conference rival Angelo State advanced to the postseason. Talk swirled around campus about how an Angelo State Rams team that finished behind MSU in the conference, and which lost head-to-head against MSU, could have gotten in over the Mustangs.

Ultimately, the playoff seeding came down to NCAA Division 2 playoff qualification rules; D2 has no guaranteed qualifiers, so the Rams’ better overall record and higher national ranking earned them the nod to the playoffs. All MSU could do was plan for the next year.

Fast-forward several months to Saturday night around 6 o’clock, when fans were still filtering into Memorial stadium as the Mustangs prepared to open their season against the Colorado State-Pueblo Thunder Wolves. With new school president JuliAnn Mazachek on hand to conduct the opening coin toss, the sweltering heat deterred neither the Mustangs or their fans.

Almost immediately, the Mustangs took their first lead of the season with a 73-yard pass from quarterback Neiko Hollins to Jayden Moore. But then the Thunder Wolves began to score, and they simply didn’t stop. While the Mustangs managed some big plays, the final score was a lopsided 59-27 in favor of CSU-Pueblo.

Head coach Bill Maskill said there were things the team could build off of, but overall said he was disappointed in the performance.

“There were some bright spots, more dim spots than bright,” Maskill said, “We made too many, probably too many errors, we had a hard time getting off blocks on defense and missed a lot of tackles. Probably missed more assignments than what we would have liked. Offensively, we had some big plays but really couldn’t sustain anything.”

Now, the Mustangs sit at an unenviable 0-1 to begin the season, and Maskill said there’s a lot of work to be done to put the team in the best position to win.

“I think right now we’ve got to look at tape and see where we are and find out if we got the right players playing, and then if we got the right scheme for the players that are playing,” Maskill said, before continuing, “And then put guys in the right position and try to figure out how to get them off blocks on defense and just get cleaner all the way around, we weren’t clean today.”

Up next for the Mustangs is a road clash with Eastern New Mexico University Saturday at 7 in Greyhound Stadium.

MSU has questions to solve over the course of the season, but Maskill is already working on them. Foremost among those questions is who the starter will be for the Mustangs moving forward.

Neiko Hollins started the game for the Mustangs and threw a first-quarter touchdown, before Dillon Sterling-Cole took over in the second and third quarters. Hollins returned in the fourth quarter and threw two more touchdowns, and was the only quarterback to score for the Mustangs.

Still, Maskill made it clear that the position is still open to either quarterback.

“I think we’ve got two starting quarterbacks, I think both those guys are quite capable of being starters,” Maskill said.

If the Mustangs are able to create more consistency on both sides of the ball, Maskill said he’s confident the season can turn around.

“We’re not down, we’re not out, we just didn’t play very good, and when you beat yourself, not a whole lot you can do about it,” Maskill said, adding that “I’m disappointed with the way we played, but I think we can be better. I know we’ll be better, but we’re going to have to work to make ourselves better.”