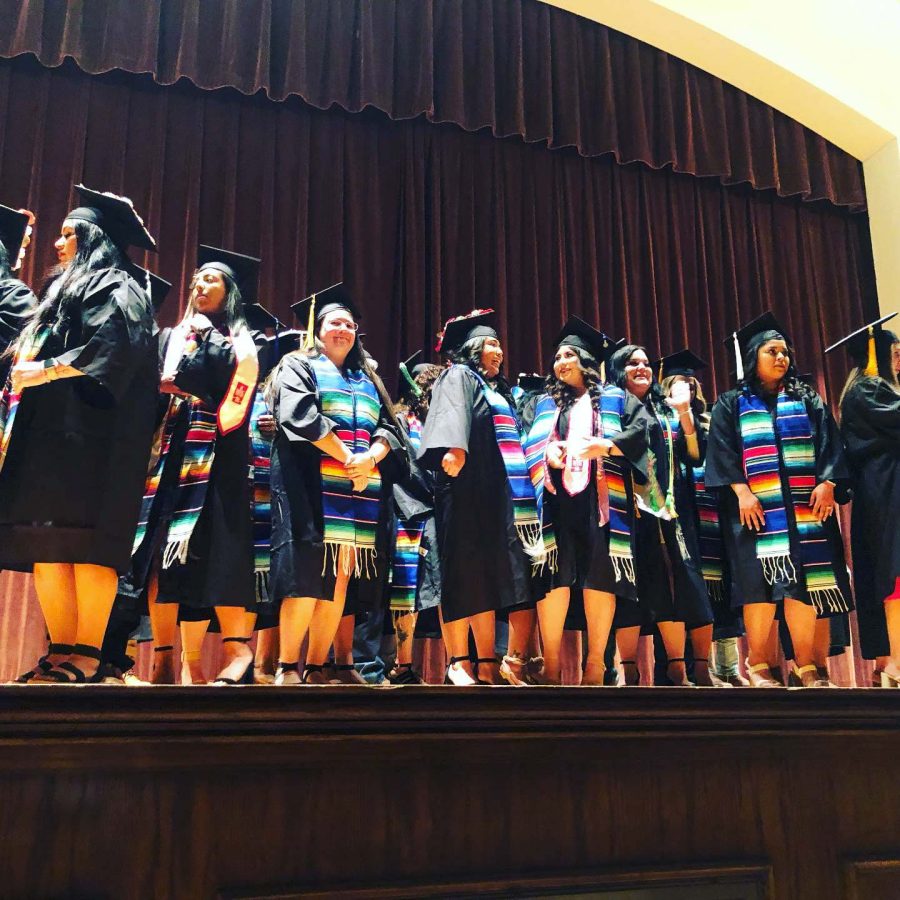 April 30, 2022, marked the fourth biannual Unidos Commencement. A pre-commencement cultural graduation that celebrates and honors Hispanic students who have completed an undergraduate or graduate degree from Midwestern State University.

The bilingual ceremony began with a brief history of the indigenous people of Wichita Falls which was followed by a moment of silence. After the moment of silence Claudia Montoya, professor of Spanish, was introduced as the guest speaker. Montoya began her speech with a quote from American philosopher, Eric Hoffer.

“A plant needs roots in order to grow. With men and women, it is the other way. Only when you grow, you have roots and feel at home in the world,” Montoya said.

During her speech, Montoya shared her story. Telling the audience about her childhood in Puebla, Mexico, and her journey to where she is today. Montoya recalled the hardships she faced.

“I do not have what is called in English ‘generational wealth.’ ¿Sabes? Esa riqueza que se va pasando en la misma familia de generacion en generacion…,” Montoya said. “…Everything, absolutely everything I have, I have earned through hard work and sacrifice. Most likely like many people in this room today.”

Montoya speaks about the privilege walk, a social experiment that puts people in a line and has them take a step forward if they were at an advantage in life or a step backward if they were at a disadvantage. The point of the experiment is to show how much privilege or struggle one has experienced in life. Montoya gave examples of disadvantages such as not being a native English speaker in the US, not having parents that went to college, not being encouraged to go to college and other examples that would be considered a disadvantage. Montoya then congratulated those that did not experience many of the hardships mentioned, telling them to be thankful and mindful of who they want to become by supporting others just as they have been supported. Montoya also congratulated those that did experience several of the hardships she mentioned, telling them that the willpower they have will always be their guiding star.

“Personal goals should not be measured by public recognition such thing is nice to have but what is more important is to know how far you have come with the tools you have been given,” Montoya said. “Lo importante no son las medallas ni los diplomas ni las recompensas. Lo importante es que tu sepas que pudiste en la carrera de la vida a pesar que aveces no tener zapatos, ese es el verdadero triunfo.”

Montoya ended the speech by giving the graduates 12 lessons from her life experience that have been useful to her. Following Montoya’s speech, the graduates walked the stage. The graduate’s name was called and then a song of their choice played, from Vicente Fernandez to Harry Styles.

“[The Unidos Commencement] is to show our spirit and what we value which is family…We just want to commemorate the Hispanic graduates,” Osiel Telles-Alvarado, criminal justice junior and Unidos Committee chair, said.

Once the graduate’s name was called they walked to the opposite side of the stage where they were met by loved ones that would put the colorful serape stole on the graduate and together they would walk off the stage. As graduates waited for their names to be called, Velia Lozano, Clark Student Center custodian, stood beside them making sure they were ready.

“I feel very happy to see them graduate because a big part of my day is spent in Clark, it’s my second home, my second family. It brings me great joy that [the students] accomplish their purpose, graduating, accomplishing their professions because at the end of the day it’s a sacrifice that they live day by day,” Lozano said.

Lozano met many of the parents in attendance because the graduates would introduce her to their families. This means a lot to Lozano who says the feeling of knowing students tell their families about her is indescribable. Following the ceremony was a reception that included food from Tortilleria Lupita. Family and friends came together to celebrate the graduates.

“I’m here celebrating the Unidos ceremony with my parents,” Livey Panaiagua-Cruz, social work graduate, said. “To have a community, to have a home outside of home I think it also brings a lot of the students together.”

Panaiagua-Cruz said having this commencement makes her feel included. Similarly, Acelynn Madrano, respiratory care graduate, participated to celebrate her culture and achievements as being part of the Latinx community.

“It celebrates us and makes sure we have a safe space to be ourselves,”  Madrano said. “It’s a great thing that they are doing because it means a lot to our community, especially our parents.”

“I know that personally, I also worked with MOSAIC, so I know that we really wanted to give a chance to students with cultural backgrounds to have their moment because often a lot of us are first-gen and a lot of us struggle and it’s really hard for us to get through college. So celebrating these milestones is really important,” Flores said.

Making the Unidos Commencement a reality takes planning from the first week of the semester and is led by the Unidos committee. This was a mostly student-driven event according to Telles with help from the Kappa Delta Chi Sorority, the Omega Delta Phi Fraternity and the Sigma Lambda Alpha Sorority.

“This is our fourth one, we’ve had three previous successful ones. The first one was the hardest one to plan out, we had to get the kinks out. This one was the biggest graduation we had,” Telles said.

There was a total of 35 graduates that walked the stage. 37 had signed up but one was unable to attend due to other obligations and one was virtual. The sign-up to participate in the Unidos Commencement is not as big as most would think says Jamilah Kangudja, coordinator of MOSAIC and the honors program.

“This has been the biggest one since they began and I think a lot of people still don’t necessarily know what this is and a lot of people are skeptical before they sign up,” Kangudja said.

“When you look at retention when you look at those things the numbers aren’t high. So the fact that these groups of people are making it to the finish line it’s a moment that should be celebrated,” Kangudja said. “I think that’s why these types of cultural celebrations are needed and they’re necessary. I hope to see more throughout the years, more people to be celebrated.”