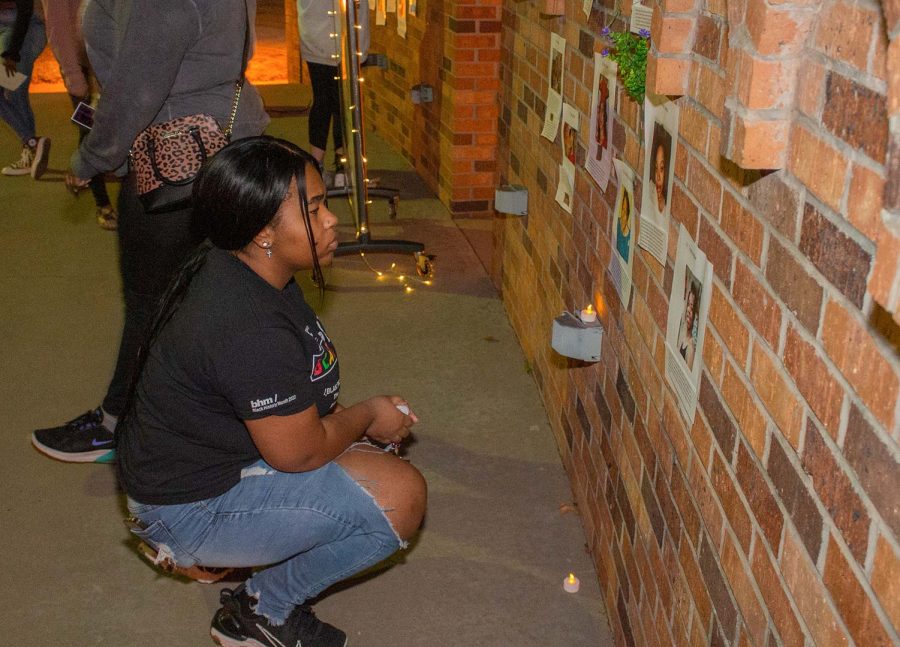 A student reads the story of a black woman killed by violence at the "Say Her Name" event, March 31.

The “Say Her Name” event was hosted on March 31, from seven to nine, where attendees listened to a poem by Aja Monet titled “Word Warriors #SayHerName” and afterward were given pieces of paper describing Black women killed by violence.  Attendees then attached the paper next to a corresponding portrait of the victim, on a wall of candles and flowers.  The coordinator of the event, nursing sophomore Amani Augustine, organized the evening with Women In Support of Empowerment (W.I.S.E.), Women Stand Council and Alpha Psi Omega.

“Last year in Spring was the first [Say Her Name event] we had,” Augustine said.  “Once I became coordinator this year I knew it was something I wanted to do every year, for as long as… needed.”

Once the event started, Augustine took the pavilion stage to read Monet’s poem and communicate to the event attendees why the ceremony is important.

“Black women as young as three and as old as 93 have been killed by the police and other forms of violence,” Augustine said.  “Though we rarely hear their names, knowing their names is necessary but not an efficient condition to lifting up their stories, which in turn provides a much clearer view of the wide-ranging circumstances that make Black women’s bodies disproportionally subject to violence.  To lift up their stories and illuminate violence against Black women, we need to know who they are and how they lived and why they suffered, so hopefully, I will never have to do one of these ever again.”

After the oration, attendees took the slip of paper they were given to them and corresponded the name of one of the victims of police violence, or other forms of violence, to one of the named pictures on the pavilion wall, as an act of solidarity for their stories.

“#SayHerName is a hashtag that was started in order to raise awareness for all the Black women who have been killed mostly by police violence but as well as other forms of violence such as domestic violence and social violence of that sort,” Augustine said.

After matching their given name to one of the portraits and placing a candle by one of the memoriams, students walked around to read the various stories of Black women subjected to violence. Augustine hopes that the event will shine a light on the acts of injustice and apathy toward Black women in America and spare a thought for how they are interacting with others around them.

“What I hope everybody gets out of this is, one, raise awareness for all these stories that… I didn’t even know… and really be aware of who’s around them and how they’re interacting with the people around them,” Augustine said.

Some students attending the event were returners from the year before.  Rachel Shipley, English and theater senior, said she hopes others will not just educate themselves but take the time to immerse themselves and contemplate these events, like the #SayHerName evening did last year.

“This is my second time attending this event at the university, and it’s been really impactful both times,” Shipley said.  “I think it’s really important to take time and read these stories because I feel like a lot of times I kind of brush through the news and kinda skim it.  So I think it’s really important to sit in stories like this, to make sure I’m headed on a trajectory that’s going to take us away from things like this happening in our society.”

While Shipley attended last year, for other students, the evening was their first exposure to these stories and style of remembering the lost.  Veronica Flores, English senior, experienced the #SayHerName memorium for the first time but she said she also felt the evening’s impact.

“It’s really moving and it’s very upsetting honesty,” Flores said.  “I really like seeing everyone come out, that is moving: how many people came out.  That being said, I think more people could come out to this event.  It’s very impactful… and thirty minutes to educate yourself.”