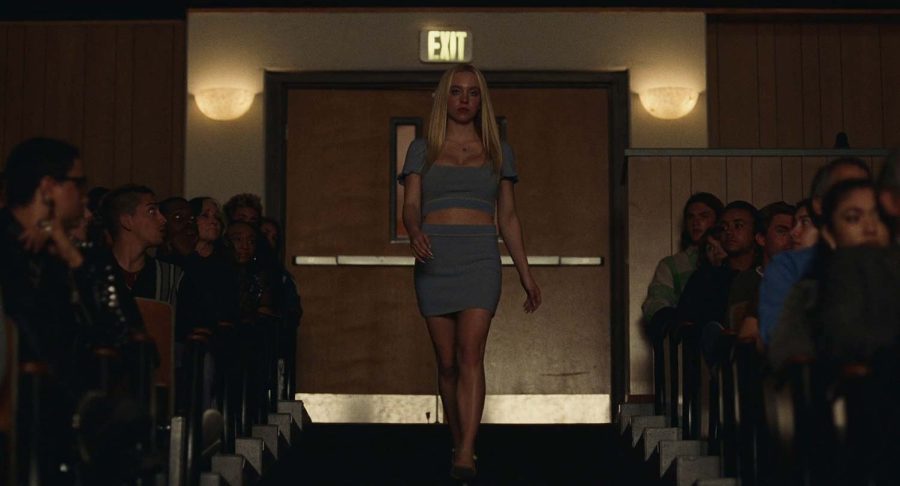 Cassie Howard, played by Sydney Sweeney, walks towards the stage to interrupt a play, 2022. Courtesy of HBO Entertainment.

Knowing that this is the last we will see of these characters until 2024 was bittersweet. The bitter part is the season finale left us with some huge cliffhangers… but on the sweet side, we all get a mental break from the heaviness of this show. And with my final review, I am fully prepared to ruffle some more feathers with my opinions. As always, trigger warning: this mentions sex and sexual abuse.

After last week’s episode ended, and seeing the look on Cassie’s (Sydney Sweeney) face, Lexi (Maude Apatow) was as good as dead. I disliked Lexi’s play from the get-go, so watching Cassie disrupt the play felt relieving. I really had no sympathy for Lexi. I mean, how was she expecting people to react? When Maddy (Alexa Demie) and Cassie began exchanging slurs across the auditorium, I knew a fight was about to go down. The last scene we got with Cassie was really important, as she told the girls that Nate (Jacob Elordi) dumped her before she even went on stage- to which Maddy told her “This is only the beginning.” It was almost as if she was attempting to warn Cassie about a life with Nate. But we’ll have to wait a year or so to know if the troubled couple lives to see another day.

Speaking of Nate, we finally see where he stormed off to after the play, and to my excitement, he went straight to find Cal (Eric Dane). Less dramatic than I expected, but this scene was by far my favorite part of the entire episode. Nate having the last say with his dad, telling him he used to have nightmares of him having sex with him, was super satisfying after the years of abuse he suffered. When Nate pulled out the flash drive holding all of Cal’s sex tapes, I was so excited as the cops pulled up and arrested Cal. The look on Nate’s face watching his dad get arrested was really heartbreaking, but it’s really gratifying to know that for now Cal has been stopped. Elordi is a great actor and I felt like this scene allowed him to shine.

Everyone had been rooting for Fezco (Angus Cloud) and Lexi since the beginning of season 2. Unfortunately, Fezco never made it to the play. Even though I am not Lexi’s biggest fan, it was so sad seeing Fezco arrested and having to watch Ashtray (Javon “Wanna” Walton) die in a shootout with the cops, instead of supporting her intolerable play. Lexi was given plenty of time to shine last week, so it felt very fitting that she didn’t get as much screen time this week. But anyway, after Cassie’s explosion, which Lexi 100% deserved, Lexi quickly puts on the victim hat. Crying about how the show was ruined, whining that she wasn’t trying to hurt or embarrass people, etc. Come on, she literally had a whole act showing Cassie’s character masturbating on a carousel ride. She knew what she was doing, her innocent act isn’t fooling me. A lot of people were cheering her on, and honestly, I don’t think I will ever understand why.

Rue still seems to be doing better, apologizing to people, and reconnecting with the life she had before. We were also given more insight into her dad’s funeral, which helps to add more background to how she started using drugs. I was happy to see her go talk to Elliot (Dominic Fike)- but I found it ironic that even though he’s the one who squealed on her, he is still using. It’s okay though, he sang her a really pretty song to make up for it… but did it have to last for 3 minutes? Interesting how he glossed over the fact he’s being a bit hypocritical, but onto a more annoying person: Jules (Hunter Schafer). As she walked up to Rue after the play to say she loves her and everything, I couldn’t help but laugh. Does she not remember cheating on Rue with Elliot? Apparently not. But our fearless main character Rue walks away unbothered.

People under 18, or those with a history of abuse, addiction, or mental illness should NOT watch Euphoria. While the plot is great, the acting incredible, and is entertaining… it features a lot of unnecessary elements. I think if they cleaned it up a bit, it would be so much better- because it’s important to show the negative effects of addiction, peer pressure, and other things teens struggle with. The show highlights some of the darker realities teens face- ones that adults may neglect to see the severity of. Sure, parents know of the dangers of sexting and drugs, but I think Euphoria has done a great job showing just how dark it gets. However, my main complaint is the amount of nudity and sex. I get that it’s a part of the storyline, but I don’t want to see it every other scene. And I’m not alone in this, many of the actors had to negotiate with the director for less nudity. Specifically, Sydney Sweeney, who had to fight for clothing more than the others did. She’s a person, not an object.

Overall, I think this was a really solid end to the season, and this episode gets 4/5 stars from me. I think the acting was incredible as always, both Zendaya and Sydney Sweeney deserve awards for their performances this season. The way they portrayed what both their characters were going through was incredible and felt more than believable. I’m ready for season 3, but I’m okay with waiting until 2024. I think we can all use a Euphoria break. And as Zendaya herself said when season 2 aired- if you are unable to handle the subject matter, please do not watch this.