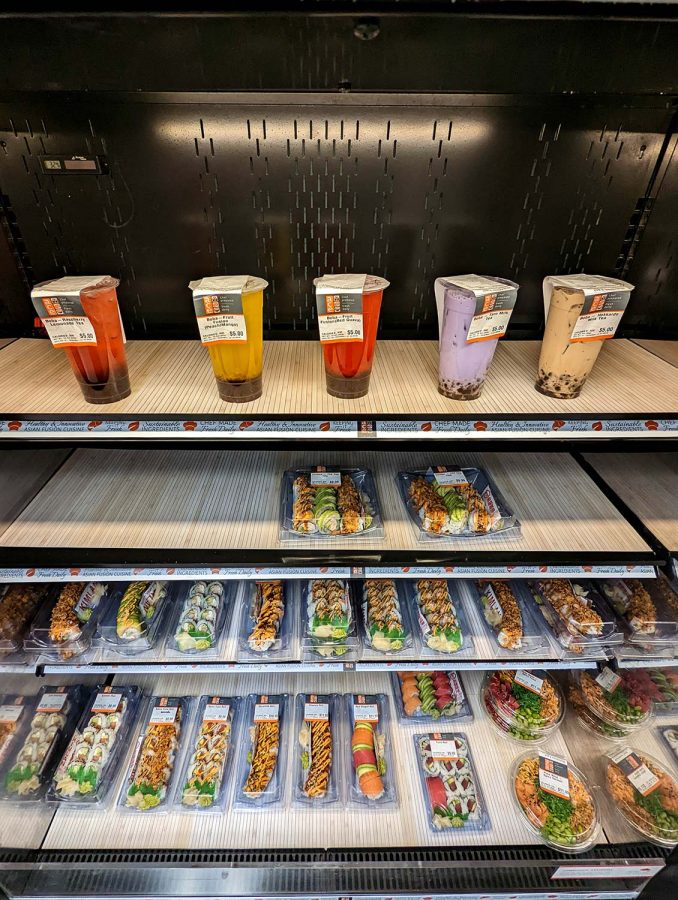 Ace Sushi offers boba and sushi ready and fresh from its fridge, Nov. 30.

Ace Sushi just wrapped up its first semester as one of the retail dining options at Midwestern State University, taking the slot in the Clark Student Center previously held by Burrito Bowl for many years. Ace has reportedly been a hit with students overall, but the new restaurant has amassed its own number of complaints as well.

“Regarding… whether or not Ace has met expectations, we have increasingly heard requests from students looking for healthy options and options that meet the needs of students on gluten-free diets. Ace has been well received in its opening semester and we’re listening closely to the feedback students are providing,” Kristi Schulte, director of residence life and housing, said.

Not including The Market at Legacy and the on-campus Starbucks, which primarily sell beverages and convenience items, 15% of all dining-option transactions occurred at Ace Sushi. This ties the newcomer with Einstein’s Bagels and puts it ahead of Maverick’s Corner, which recorded 10%. Ace still trails Chick-Fil-A and Mesquite Dining Hall, which recorded 20% and 40% of transactions respectively. Notably, Ace performed considerably better than its predecessor, Burrito Bowl.

Despite the positive response, the Ace Sushi on campus has not been exempt from criticism. Among the complaints, the most common amongst students has been that there isn’t a meal exchange option at Ace Sushi, unlike the other dining options on campus.

“One of the points of feedback we’ve received is a request to implement a meal exchange option at Ace. We are exploring possibilities, but I do not have a solid timeline for when that might be accomplished,” Schulte said.

Students are still able to pay with cash as well as their flex dollars. However, Ace is one of the pricier options at MSU. Many of the staple meals cost upwards of $10, meaning that if a student had the base $100 flex cash option, they could eat there no more than ten times a semester, and that was if Ace were the only option they chose to spend their flex dollars on.

“I don’t think it’s worth the flex dollars I spend on it. I think I’ll only go back for the Boba tea. That’s about the only thing though, unless they had like a meal change or something and the food was not as salty,” Adriana Brown, marketing junior, said.

“Our relationship with Ace is different than the other retail dining options on campus. Chick-fil-A and Einstein’s Brothers Bagels are national brands that have standing meal exchange options available through their agreement with Chartwells. Those who run Ace are local to the Wichita Falls community and as such, there wasn’t a pre-existing agreement allowing us to initially offer a meal exchange,” Schulte said.

While Ace Sushi has been applauded by some for bringing healthier and gluten-free options to campus, many have been dissatisfied with the menu. That, along with the stigma that sushi in unformal settings can carry, has kept some, including Kevin McNeil, management information systems senior, from considering Ace as a dining option.

The administration at MSU is taking into account all the feedback, both positive and negative, about the newest addition to the campus dining lineup. Using that information, they have made plans to adapt and improve the campus Ace Sushi in the near future.

“We are continuing to make adjustments to the program and anticipate having additional menu and program announcements in the spring semester,” Schulte said.