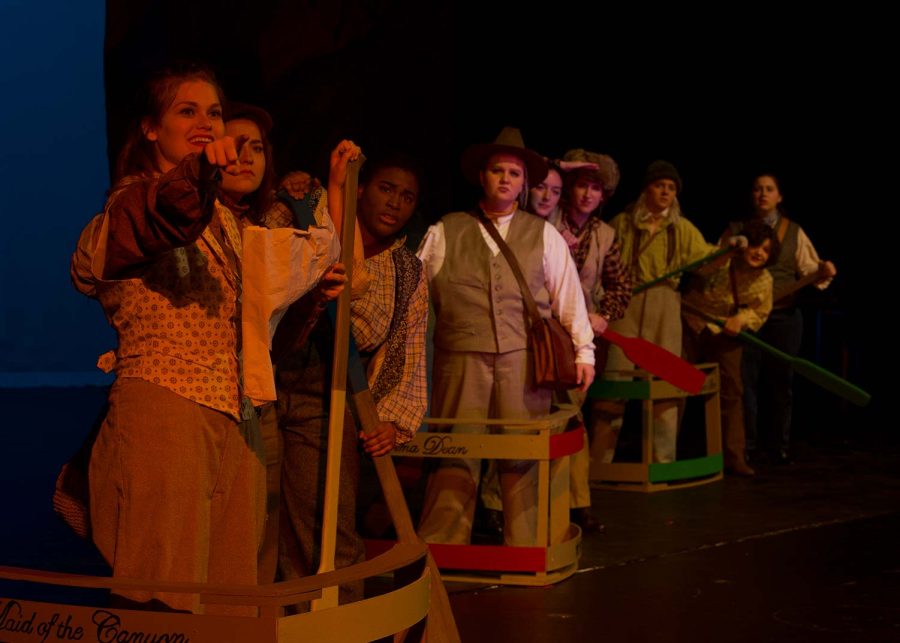 The cast of "Men on Boats" looks out over the Colorado River, Nov. 18. Photo courtesy of Emma Brown.

was put on by the MSU Texas theater department Nov. 19 through 21. This was their second main-stage production of the Fall 2021 Semester, and the story follows 10 men charting the Colorado River for the U.S. government in 1869. 78 people attended on Friday, 75 on Saturday and 70 on Sunday. The tickets were $10 a person or free for faculty and students. Rebekah Gardner, theater senior and director of “Men on Boats” wanted the individual stories of these men to be the focal point for the audience.

“Men on Boats” is fictitious, but it’s based on the stories of real men. The twist is that it’s performed by an all-female cast. Gardner said the directing process involved getting the actors to have fun with their characters.

“We spent a lot of time doing movement-based warm-ups and activities to get them used to working with one another, working as a unit. I had to remind them often that the reason why this play was written was to give a chance for feminine presenting actors to have a chance to play the big bold characters that are typically given to male presenting actors,” Gardner said. “So, if they wanted to present that angular, masculine type of presentation in their acting, they could. And I kind of wanted them to play around with that.”

Part of the directing process included working with other students. Gardner said being in a learning environment and production at the same time resulted in an interesting experience.

“It was really interesting getting to work with the design team because, similar to “The Drowning Girls,” which was the last production I directed at MSU, the design team was made up of entirely student designers. So, it was interesting getting to work with people who are also learning at the same time as I am,” Gardner said. “They’re getting to experience the education side of putting together a show along with me.”

Reagan Whiteley, theater junior and costume designer for “Men on Boats,” said that the design process for the show involved a few different types of research. That meant reading the script over and over, finding period fabrics and patterns and discussing with Gardner what their goal as director was.

“I got together with Rebekah Gardner, our director, and we just kind of talked through what their ideas for the show were, and the concept and what they were thinking about different characters,” Whiteley said. “They had talked with our set designer about giving each boat a specific color and I wanted to implement those colors that we were giving those boats into the costumes because as the show goes on, some of the people lose those boats, but you are still able to tell who’s connected from the colors and stuff of the boats themselves.”

Whiteley also sent out a Google Form to the actors to get a sense of what they saw made their characters unique. This, along with the comfort of the clothes, ended up getting a good reaction from the actors.

“Everyone really, really liked the clothing, because it’s made to be comfortable. They are adventurers, they need to be able to maneuver… There was a lot of [good] reception to the clothes, which made me very happy as a designer,” Whiteley said. “[There] was a struggle with the design itself [though, since] it is a lot of the same shape and, in fact, a lot of the same patterns of clothes…I wanted to give everybody an individual personality and help showcase who that character is through that costume either how they’re wearing or elements and accessories and stuff that is a part of the costume as well.”

“I think that gender-bent shows are important for theatre because there is a severe lack, in the world of theater, in gender diverse casting and I think that shows like “Men on Boats” are very important to get audiences used to seeing that theater isn’t just meant for cis-actors. It isn’t just meant for people to portray what’s necessarily written on the paper, the script,” Gardner said. “Theater should be an opportunity for exploration, especially since a major part of the theater community is the LGBTQ community and POC community. Everyone should have an opportunity to play different types of roles.”