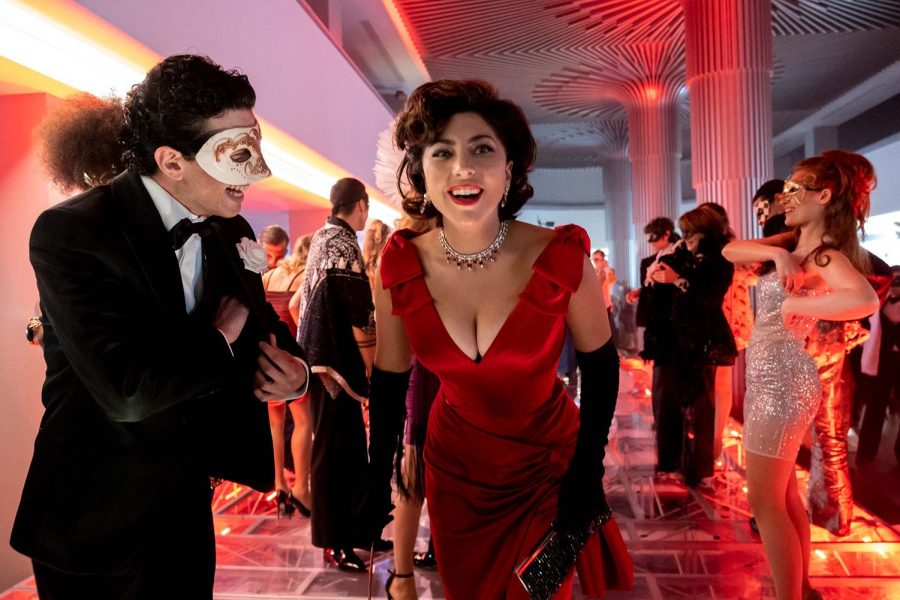 House of Gucci hit theaters on Wednesday, November 24th. Although it may not be a heartwarming movie, such as Encanto, to watch with the family – if you’re like me and enjoy realistic, edgy, thrilling movies with a dark twist, then this movie is for you.

If that’s not enough to intrigue you, let’s take a look at this film’s extraordinary cast. First, we have Lady Gaga, an American singer and songwriter who plays the main character, Patrizia Reggiani. Though I’ve personally never seen Gaga act and can be skeptical when certain celebrities cross over to the big screen, I must admit, she had me sold throughout the entire viewing. Next, we have Adam Driver, who plays no other than Maurizio Gucci. The movie mostly focuses on these two as it is about their not-so Gucci life. Rodolfo Gucci, father of Maurizio, is played by Jeremy Irons, and though he makes an exit quite early in the film, his impact remains throughout. Next, we have someone who is more naturally suited to these types of films… because what’s a movie about a foreign family involving murder without Al Pacino? Pacino plays the uncle of Maurizio, Aldo Gucci. The last family member I’ll mention, the cousin to Maurizio and Adolfo’s son, Paolo Gucci, sheds light on the reality that not everyone born into a billionaire family is prosperous. Lastly, we have Salma Hayek, who isn’t a face that is consistently on the big screen, whose character is essential to the unfolding of the murder of Maurizio.

So, is House of Gucci a true story about the brand, Gucci? It may be silly to ask but even after viewing the trailer, I had asked myself if this was just a completely fictional movie made for entertainment about the realities of industry life. But no, this is a true story.  The real Patrizia Reggiani was born in northern Italy, in the city of Vignola in 1948, to a poor Italian family that owned a mediocre trucking business. Maurizio Gucci was born in 1948 in Florence Italy to Rodolfo Gucci, the son of Gucci founder, Guccio Gucci. You can only imagine how exactly these two met. At an exclusive party, Reggiani sets eyes on Maurizio, who she mistakes for the bartender working that night. When Reggiani sees Gucci, she falls in love instantly, at least when she hears his last name. The beginning of their love story, I admit, is painful to watch. Reggiani does everything in her power to sway Gucci into taking a liking to her. Nonetheless, her efforts succeed and the two married in 1972, despite Maurizio’s father’s disapproval. When wed, Maurizio is studying to become a lawyer and doesn’t want much to do with his family business, and begins working for Reggiani’s family until later reconciling with his father. Though Maurizio still wants little to nothing to do with his family’s business, Reggiani has other plans.

The character development in this movie was incredible. As the story unfolds around the lives of the Gucci family members – we see the development of Reggiani’s consumption with fame, money and power and just as we see it, Gucci sees it as well, especially after the death of his father leaves him with 50% of the company’s fortune. It doesn’t help that Maurizio is not a businessman and Reggiani sees this as an opportunity to take charge of the brand. Reggiani’s manipulative capability to turn family members against each other has to be respected in my opinion. This woman ends up being the reason that Paolo Gucci sets up his father by tipping off the IRS and exposing his father’s unpaid tax forms, landing his father, Aldo Gucci in prison for one year and a day.

The most remarkable point in this film, despite Reggiani stealing the show, may be the fact that the Gucci brand walks on eggshells until nearly the end of the film. It isn’t until the last scene featuring Maurizio Gucci, forced to sell his last chair, ending the Gucci family’s involvement in the company, that we see the rebirth of Gucci. From then on, Gucci becomes what it is today, an almost $22.6 billion-dollar company according to Forbes.

Again, this movie is not one that you want to miss while in theatres. It’s not the ideal family movie considering the R-rated advisory for sexual content, brief nudity and language, but is definitely worth the viewing, especially if you are a murder mystery fanatic like I am. And of course, in the end, the film shows what happened to every character in real life, one of my favorite aspects of true-story movies.