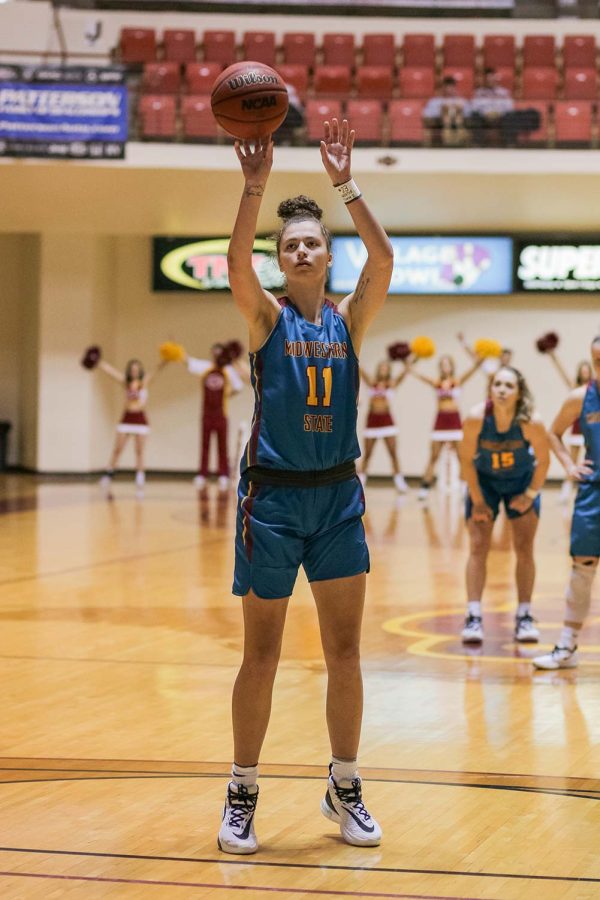 This basketball season, Hannah Reynolds will walk the stage for senior night acknowledging this one as her last being a Mustang. Reynold’s said it is an overwhelming and surreal feeling.

“It’s very overwhelming in a way because I never thought basketball would end for me. Basketball has always been there, it’s always been another season; it’s a surreal feeling. At the same time, it’s exciting. I have an amazing team, as people and as players,” Reynolds said.

Reynolds, a health administration first-year graduate student, said she’s never intended on continuing her basketball career professionally because she is looking forward to working in healthcare. Her passion for healthcare began when she was in high school.

“I’m excited to have a job and move forward with something new. I was first exposed to healthcare in high school; we had a program that would allow us to intern at the local Prosper hospital, and we would shadow the different departments. I was able to see the clinical side of things… though I had realized that wasn’t what I wanted to do but still be involved with patients. That’s when I was introduced to the administration side of it, and it stuck with me ever since,” Reynolds said.

Reynolds said her biggest goal is to make a difference and help people. She says the healthcare system can be very impersonal, and she hopes to be different.

“The system can be very black and white when it comes to policies and structure, meanwhile, patients’ stories aren’t… I can’t wait to find a way to help everyone out and not just the ones that ‘fit in,’” Reynolds said.

Reynolds, originally from Prosper, TX, said her town was very sports-oriented. She began playing basketball when she was just six years old.

“Growing up in Prosper was amazing, it was a very sport-oriented town. I started basketball because at the time it was just something to do… along the way, I actually had quit basketball for softball, because I thought I was going to be some star softball player… I quickly found that wasn’t going to be the case, so I once again quit softball and went back to basketball. I began traveling and playing at scout tournaments and by the time I was a freshman in high school, I was interested in playing in college. I fell in love with the recruiting process, I ended up choosing MSU because the family atmosphere and I met coach Johnson [former head coach of women’s basketball]. She was actually a big reason why I chose this school,” Reynolds said.

Reynolds and Coach Johnson had a close relationship. She says that coach Johnson was and still is one of the most influential people in her life.

“She was really big on culture, family and God. When she passed, it was very hard on me, I even thought about transferring. However, I stayed, and with a lot of family that has been through this before, it’s been okay but I still have moments where it’s difficult. Something I took after her and really resonated with me was to be kind to everyone, I feel like that’s overlooked. It’s easy to say ‘yeah I’ll be nice to everyone’ but she really went out of her way to be nice to everyone and make sure they were heard and felt appreciated,” Reynolds said.

Reynolds is the oldest veteran and only player on the team to play all five years at MSU. She says she’s appreciated each team she’s played with.

“Something I’ve learned was playing with a different team every year means there will be a different dynamic with every group. What works with one group may not work with the next. However, no matter what, at the end of the day, we all came to play basketball and do what we love and I’ve appreciated that from each team,” Reynolds said.

Reynolds’ favorite game was against Texas A&M Commerce her sophomore year where she almost had a triple-double in blocks. She says this day was a one-time game which is what made it special.

“The whole team was just playing well that day and we didn’t repeat it, it was just something special on that given day. Another game was senior night of 2019 when Coach J broke out the hospital to come watch our senior night. She came all the way from Fort Worth and it gave me chills, we played phenomenal that night,” Reynolds said.

Although Reynolds is excited and ready for her new life she says there’s no doubt she will miss being a mustang. Reynold’s said there’s been an impact made on her since she first walked in.

“I am sad about it, I try to say I won’t miss it but I definitely will. The people here have made an impact on my life since day one and basketball has given me so many opportunities. I’m really trying to just absorb everything and not take anything for granted.”