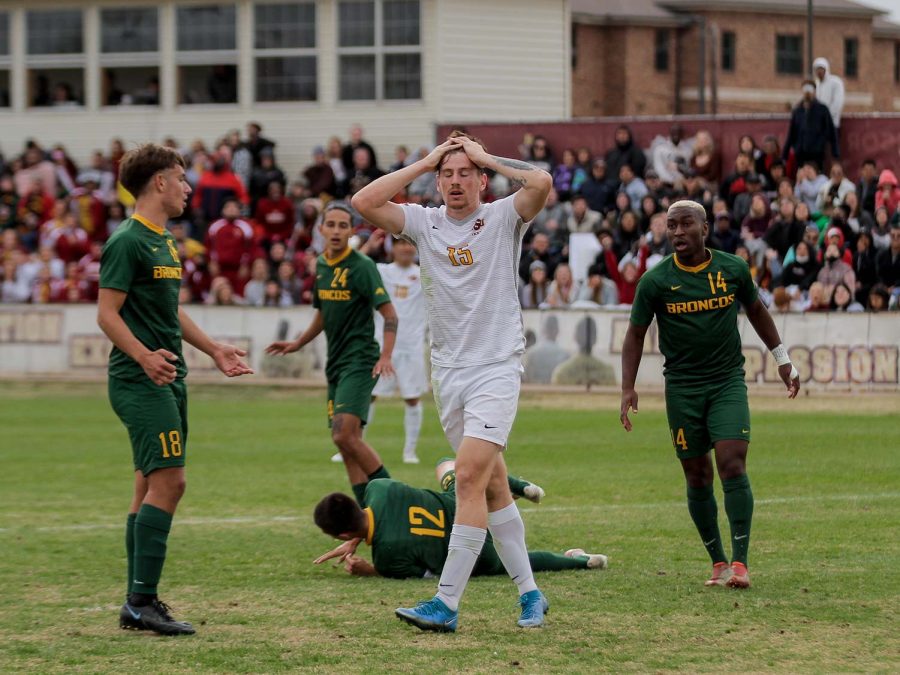 Masters of business administration senior and midfielder James Doyle shows his frustration at a missed goal during the second half, Nov. 21.

Men’s soccer loses in the second round of the NCAA ll Championship to Cal Poly Pomona 1-0, Monday, Nov. 21 at Stang Park. The Mustangs finished the 2021 season with a record of 16-3-1.

“In the first half, [Cal Poly Pomona’s players] were very organized and kept good shape and they didn’t allow us to find space behind them,” Michael Meachum, head men’s soccer coach, said. “They did a good job of defending and not let us come back in the space and it made it difficult for us.”

For the third straight year, the Mustangs did not advance in the Championship. The second round of the tournament required a restart for the team which shook up the team dynamic.

“This loss was due to, probably, a lot of different factors. Unfortunately, it was on a restart and when you get late in the season like this and the NCAA tournament restarts, sometimes restarts can be the difference, and today it was the difference,” Meachum said.

The Broncos, from Cal Poly Pomona, scored off a throw-in from Melvyn Perez Cortez putting the ball inside the Mustangs’ box. Eduardo Faria beat his defender and, with a header, put the ball past Midwestern’s goalkeeper, Marc-Antoine Huzen (No. 29), marketing senior. The Mustangs outshot Cal Poly 16 to 13. Mere Escobar (No. 11), forward and business management sophomore, had four shots, including a powerful shot in the 76th minute that went over the crossbar. James Doyle (No. 15), midfielder and business administration senior and Julian Barajas (No. 20), midfielder and kinesiology senior, both had three shots, but it wasn’t  enough for the number two seed Mustangs.

“This loss is obviously very disappointing. We’re the number two seed and we’re playing at home, so we had everything for us and we couldn’t pull through,” Captain Carlos Flores (No. 17), midfielder and kinesiology senior said. “I mean there’s always a next year for a lot of us, but for me, as a senior, it’s over.”

The Mustangs had their best record since 2018. They finished the 2021 season in first place for the Lone Star Conference season and tournament, ending the season hosting the NCAA Division ll Championship in front of fans and a packed Stang Park.

“I appreciate all the fans that came out today and all the support from the University,” Meachum said. “I feel for the seniors that are here this time and we have eight of them. It’s tough for those eight to not be able to play at Stang Park anymore.”

The seniors, and other players, have been with the Mustangs through the pandemic and the 2017 championship when they made the elite eight. Good memories with fans, teammates and coaches come to an end for those seniors.

“My best memory is everything. I mean, being with my teammates coaches and being part of the team playing,” Flores said. “I enjoyed being here at home with these amazing fans, but my favorite one, I would probably say, in 2017, when we made the elite eight, and I mean, we were in front of all these fans; 2,000 3,000 fans. So, I think that was my favorite memory.”