Men’s soccer reflect on their journey to the LSC trophy 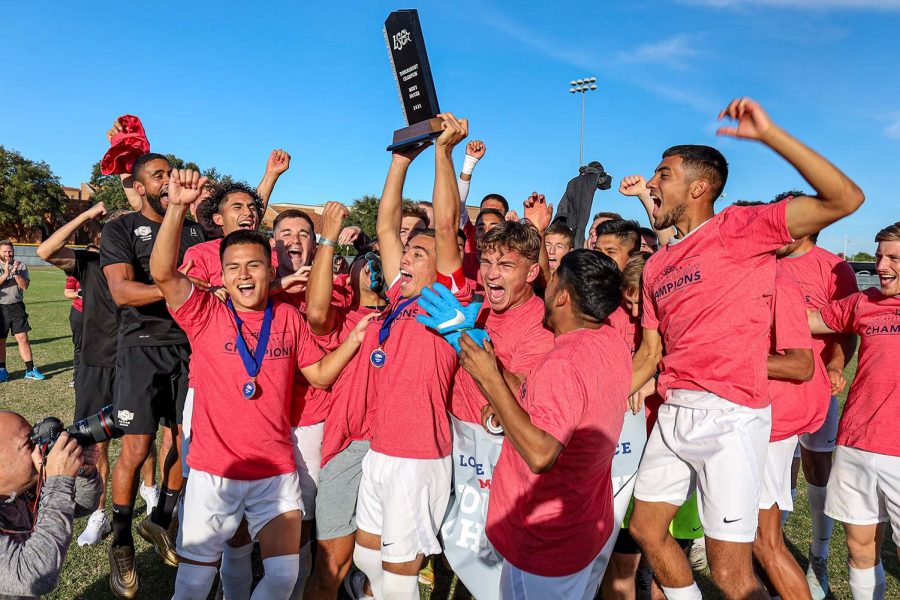 Kinesiology senior and midfielder Carlos Flores holds up the Stangs' trophy as he and his team celebrate their victory against Lubbock Christian University which made them champions of the regular season and Lone Star Conference Postseason Tournament, Nov. 14.

Men’s soccer won the Lone Star Conference Postseason Tournament Final in penalty kicks, 5-4, against Lubbock Christian University at Stang Park on Sunday, Nov. 14. As the regular season and LSC Tournament champions, the Mustangs reflected on their journey that brought them to the moment of raising the LSC trophy.

“It’s awesome. It’s a good show of all the hard work from the players and the staff, and you know, the support from the university,” Michael Meachum, head’s men soccer coach, said. “Their dedication and their sacrifice shows every day. They put in the work every day and they put it in the summer, and, you know, they stayed around, came back early, all that kind of stuff. I mean, it’s just kind of their resilience to sacrifice their personal time for a collective goal.”

The 2021 season for men’s soccer finishes with a 16-2-1 record for the LSC Champions. The 2020 season was shortened due to restrictions from the coronavirus pandemic leaving the team with a 7-3-1 record. In 2019, the team had a 16-5-0 record and the club’s seventh-straight NCAA postseason appearance. Meachum consistently produces winning seasons for men’s soccer, proving that hard work from his players pays off.

“It’s been tough work,” Carlos Flores (No. 17), captain, midfielder and kinesiology senior, said. “Behind the scenes, we’re practicing day-in-day-out, and a lot of people don’t know but we’re putting everything we got into it. Fortunately, the results are showing. Hard work, dedication and I think the number one thing is we all believe in our team.”

The chemistry for the Mustangs in 2021 was aligned to make the postseason and become champions. Coach Meachum built a team that is united and the result is being able to raise the trophy for Midwestern State.

“Hard work got us here. This year, I think we are more of a unit than last year,” Mere Escobar (No. 11), forward and business management sophomore, said. “We all get along and there is no little beef between the teammates. We are united as a team, so that lets us do things like winning the championship. I think all the hard work pays off on the field; we play together, we win together.”

The Final for the LSC Tournament was played on Sunday at 1 p.m. at Stang Park. Coach Meachum prepared his team with what they always do and to create opportunities on the field.

“We prepare basically the same way we always do,” Meachum said. “We focus mostly on ourselves and do a couple of tweaks. We change what we need to do from that point, and what we can do to create good opportunities for us to take away opportunities for them.”

The game ended regulation 0-0 and was forced into overtime. The Mustangs and the Chaps from Lubbock went into a penalty kick shootout to determine who would be the champion of the 2021 LSC Postseason Tournament. The Mustangs would depend on goalkeeper Marc-Antoine Huzen (No. 29), marketing senior, to save the team on the Sunday afternoon from defeat.

“I told the guys he is the best goalkeeper on penalties,” Meachum said. “He is going to save one. All you guys need to do is your job.”

James Doyle (No. 15), midfielder master’s of business administration senior, put the first PK for the Mustangs past the Chaps’ Braxton Thorne. Then, Huzen made a dive to his left for the save on Rodriguez-Cabo on the second round of penalty kicks. Then it looked like a second save to his right on Pablo Galietero-Diez (No. 7) from LCU but was called that he stepped past the line early.  Next, was Flores who placed the ball successfully on the low left part of the goal.

“The energy from the crowd got us going and energized to make the shot,” Flores said. “Throughout the game, the sun was a factor because it was shining in our eyes, but the PKs were facing the other direction so I was able to get it past the goalkeeper.”

Next up was a successful conversion by Escobar to the low right corner, then Rory Doyle (No. 16), midfielder and exercise physiology sophomore, put one in the upper-right of the net. Trevor Amann (No. 9), forward and mathematics senior, put the winning PK in the high middle portion of the goal.

“We had tremendous support from the crowd today,” Meachum said. “You could have heard our fans from the other side of campus.