Stangs’ Stories: A duck-feeding morning with Judy Smith and Friends 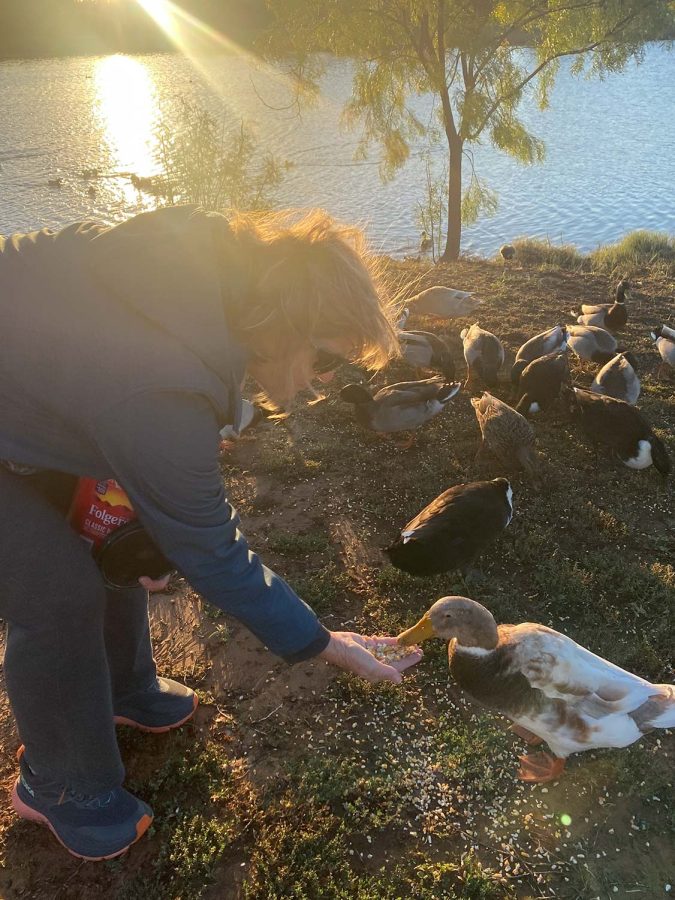 Judy Smith and her two friends, Pam Jackson and Marilyn Hardman, wake up each morning ready to feed the geese and ducks that live at the Sikes Lake Center. Smith says, Sikes, more than anything, is just a good place to walk.

“I used to ride bikes around the lake but once my back started getting too bad, I couldn’t ride anymore. My only other option was at least to walk; I’ve always been active my entire life. My friends, Pam and Marilyn already walked out in Lake Wichita, and we all decided to start walking out here around Sikes because other than Lake Wichita, Sikes has bathroom facilities and there is a lot of light in case we come early in the morning. It was really just a good place to walk,” Smith said.

Smith says she slowly began to start feeding the ducks. Jackson, her friend, started feeding them shortly after. They have both become so familiar with them that Smith and Hardman have even named a few.

“The geese will fly in and then come to where we are feeding them, I think a lot of times they’ll come from Lake Wichita. We have named a few of the ducks, there is one we call Peggy, we’ve been feeding her for roughly three years, and she still won’t let us get closer to her. The rest of them sometimes, even the wild ones, will eat out of our hands. We also have three Chinese geese, and we gave the nickname ‘the bro’s’ to them, even though one is a female. The ‘bro’s’ eat out of our hands, but they don’t like when other ducks are around them, they always want to be the only ones getting fed,” Smith said.

Smith says she grew up in the country and has been around animals her entire life. She says she used to have horses, cats and dogs. Because of her background with animals, Smith was happy once she finally got one to eat out of her hand.

“It’s slowly progressed, and there’s become so many of them. We really do enjoy coming out here and feeding them. Since we are out here every morning, at least Monday through Friday, we get to see the same people that come and walk their dogs or ride their bikes, it’s a social thing and I get to see and spend time with my friend every day,” Smith said.

Smith feeds the ducks with cracked corn from a bucket, and although she’s sure there are other food options for them, what she’s noticed is the ducks and geese like the corn the most. Smith and her friends walk around Sikes Lake four times with a goal of completing four miles. They continuously make stops along the way and feed the ducks until they no longer have any corn left in their bucket.

Smith says the ducks and geese flap their wings every time they see them come around. She believes they look forward to her feeding them each morning.

“I really do think they look forward to being fed by us each morning. I know they have to have another supply of food unless they wouldn’t stay here, I’ve heard there are some fish here and I have to assume so. Sometimes I feel bad for them because when it rains all the trash and plastic runs into the water, but I’ve seen some kids take the time to pick up the trash in the lake and that relieves me. There are always workers around as well; this really is a safe area all around, definitely more pedestrian-friendly,” Smith said.

Smith, a Wichita Falls native, moved between Wichita and Vernon. She retired just four years ago.

“I retired about four years ago and so now I just get up and do this every day. I worked at the state hospital in the reimbursement department. I started at the one in Vernon then moved back to Wichita Falls because I am originally from Wichita…I’m now in the stage of ‘you work your whole life and now is when you get to enjoy it,’” Smith said.

Smith says she’s seen a few younger kids join in on feeding the ducks. She said it’s nice to know that people will continue feeding them even when they may not be there.

“As many of them as there is, what we feed them isn’t enough to sustain them but at least we are helping, and I truly feel like we are all helping,” Smith said.