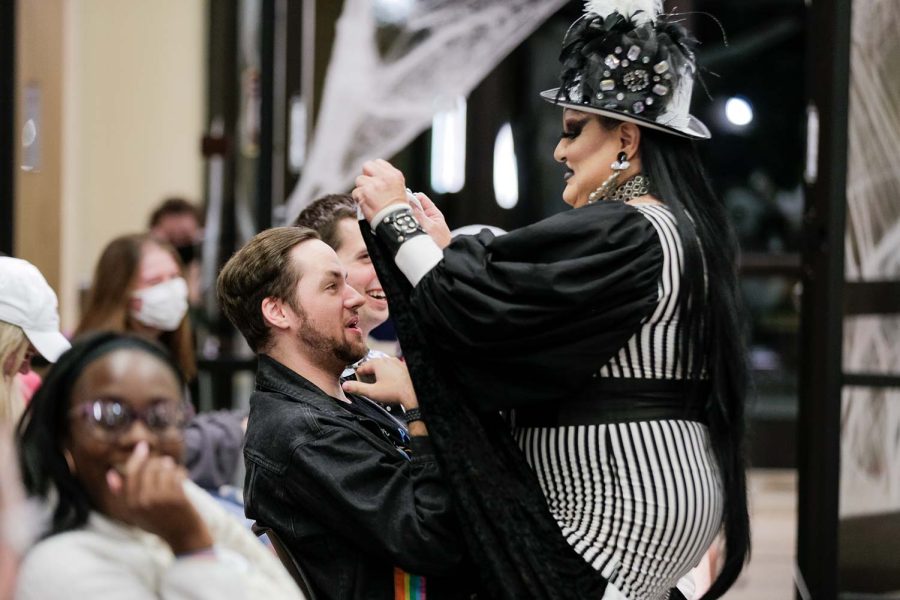 LGBTQ+ History Month is a month-long celebration in October that honors the history of the LGBTQ+ community. MSU MOSAIC and PRIDE teamed together by hosting events throughout October to bring awareness to some of the histories.

“I believe just like any observances or community, I think it’s important to highlight any community. October was LGBTQ+ History Month and so it’s really a highlight essentially that month of history, of everything that has happened civil rights wise for the LGBTQ+ community. I believe it was very important for us to highlight that,” Ruby Garrett, assistant director of MOSAIC Cross-Cultural Center, said.

“It’s pretty important to celebrate [LGBTQ+ History Month] because it gives us the space to talk about the history. Pride of course you can still talk about the history and I definitely think you should. Pride Month is definitely more celebratory, it’s quite frankly more fun because LGBTQ history can be quite depressing, so I do think it’s important to have those separate months to have like those separate spaces for both education and celebration,” Bella Muniz, community service chair of PRIDE, LGBTQA Student Council and English sophomore, said.

This was the first time the MOSAIC office had celebrated LGBTQ+ History Month. Garrett said that when MOSAIC was looking at the different observances that are celebrated they had PRIDE month in June but not a lot of students were on campus which is why they wanted to highlight October.

“I think [LGBTQ+ History Month] has delivered a more inviting community on campus. I think actually having a month and partnering up with PRIDE and other faculty and staff that wanted to participate in the committee…created a more welcoming environment,” Garrett said.

The creation of the events for this month created a more welcoming environment on campus. It was also an opportunity to learn. Ezryn Champagne, president of PRIDE and computer science senior, remembers a moment they shared with an attendee to the PRIDE Drag Show.

“At the drag show…I was talking to this guy and he was talking to me about…he’d see RuPaul’s Drag Race…but he’d never seen drag in person and he was just so intrigued by it. We talked for a while about LGBT stuff because he was just very curious about it,” Ezryn Champagne, president of PRIDE and computer science senior, said. “I think celebrating these things on campus where it’s already a learning environment just creates an environment where people can learn more about people who aren’t like them.”

The events for LGBTQ+ History Month created a welcoming environment on campus and allowed for those on campus to learn, but it also opened its doors to those off-campus. The PRIDE Drag Show attracted not only students but people from the Wichita Falls community.

“I think it’s very important for various people to be at those events because I saw so many different people from the general community of Wichita Falls come to the drag show especially that I was not expecting to be there,” River Adams, PRIDE secretary and criminal justice junior, said.

Adams is from Wichita Falls and had never attended a drag show. They were expecting students that they knew are part of the LGBTQ+ community to attend the drag show, which they did, but other individuals from different backgrounds attended as well.

“We just had a drag show. It was very good; it was very fun. It was my first actual drag show that I have been to because I grew up around this area and we don’t have stuff like that here,” Adams said.

The PRIDE Drag Show was the last event for MSU’s LGBTQ+ History Month celebration. The month began with a booth that had informational handouts and calendars. Other events were safe zone training, a self-portrait party that celebrated both LGBTQ+ History Month and Hispanic Heritage Month, a movie night with the movie Disclosure and trivia.

“I think like in every observant, people always think about one month and that’s it, but just like Hispanic Heritage Month, Black History Month, LGBTQ+ History Month, you don’t stop being who you are. We don’t just observe it just one month…we continue promoting the community and finding a safe space…We don’t just stop with one month, we continue,” Garrett said.