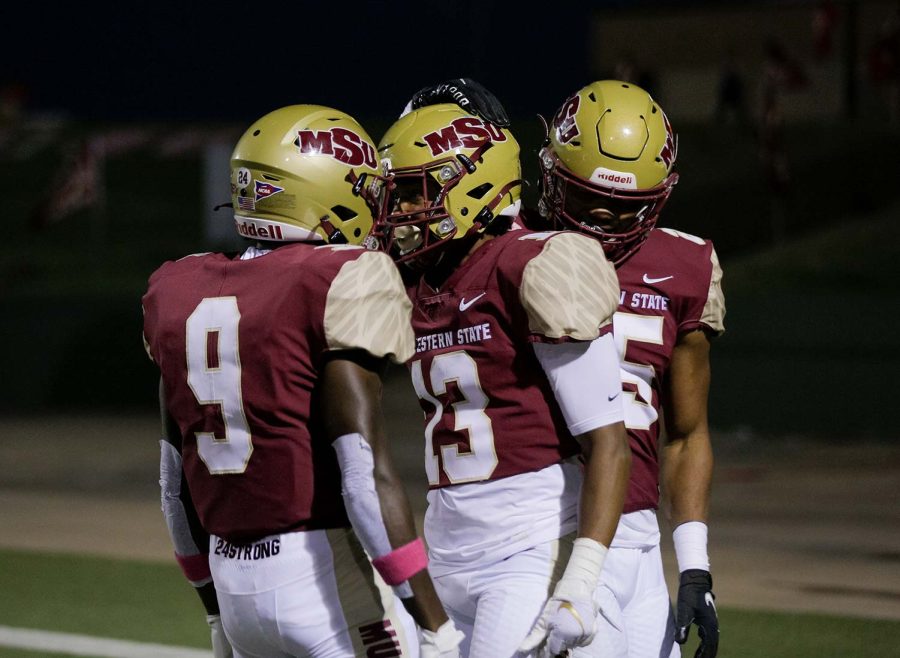 This season, the MSU Texas football team is 5-1 after its first six games, the best it has been in years. As of Oct. 11, MSU is ranked 19th in the country in NCAA Division II by the American Football Coaches Association. Dillon Sterling-Cole (No. 6), quarterback and sports administration fifth-year senior transferred from Arizona State University and is becoming heavily involved in the team after not being able to play due to injuries and lack of games during COVID. He was Lone Star Conference offensive player of the week after throwing five touchdown passes to five different receivers in the game against Angelo State University on Sept. 18.

“[I transferred because of] the opportunity that was here for me. They told me I have the opportunity to play quarterback and that’s all I wanted. So I took it and ran with it and now we’re 5 and 1,” Sterling-Cole said.

Bill Maskill, head football coach, said that the team is thankful for the early success. He also said that they need to accept and work through offensive struggles from these first few games.

“We’ve got to go forward and be better. We’ll have to be better all the way around for us to continue to have some success,” Maskill said. “As a player, you’ve got to improve every week because your opponents are trying to improve as well. So, if we can be better and not have the turnovers and be more responsible for our assignments, then we’re going to be more productive on both sides of the ball.”

Sterling-Cole said that patience and leadership are what have helped him improve over time and that he tries to encourage the other players to have those things as well. He said he wants to give them a good environment both before and after he graduates.

“It’s definitely a brotherhood in the locker room. I’m still trying to get a better understanding of what kind of culture we want to have once we leave, especially the seniors,” Sterling-Cole said. “Leaving these younger guys with the right tools so they can continue to move forward and keep the program high. We tend to keep pushing on those younger guys”

This culture can make or break the success of a team. Maskill said the mental state of his players is where he sees future improvement.

Sterling-Cole said their most recent game on Saturday, Oct. 9 against Texas A&M Kingsville started slow offensively, but picked up after the second quarter.

“The win is all that matters at the end of the day….Defense played a phenomenal game all around. They were getting turnovers and playing with a bunch of energy. As soon as the offense started to help them out a little bit I feel like we started to play a complete game,” Sterling-Cole said. “But, I feel like we played a complete game later than we should have, which was the whole second half.”

The Mustangs ended up winning the Kingsville game with a score of 30-13. Sterling-Cole said he tries to take the season one game at a time, a sentiment that Maskill said is essential to being a successful team.

Maskill said part of overcoming personal obstacles includes managing a healthy perspective of the team’s abilities. This means not letting praise for a good game go to one’s head.

“We beat Commerce and they were ranked seven in the country and at that time all of our players, all of our coaches and probably all of our families had somebody call or text [to] say how great we were. Then we did it the next week and they talked about how great we were. Sometimes when you hear that, sometimes you think you’re better than what you are. Then we played Eastern [New Mexico], our first home game, and we didn’t play as well. Who got phone calls that week? Nobody. Nobody called,” Maskill said. “The point is, is that regardless [of] what somebody else says, we have to be self-motivated to improve ourselves and you can’t listen to everything that’s being said in newspapers or [by] teammates or friends.”

This self-motivation and perseverance are what Sterling-Cole said he hopes will carry them through the season. He also said that they need to focus on what’s right in front of them to be successful in each game.

“On Saturday we only have one game to play,” Sterling-Cole said. “So, let’s focus on that one game and that one opportunity and let’s get the win at the end of the day.”