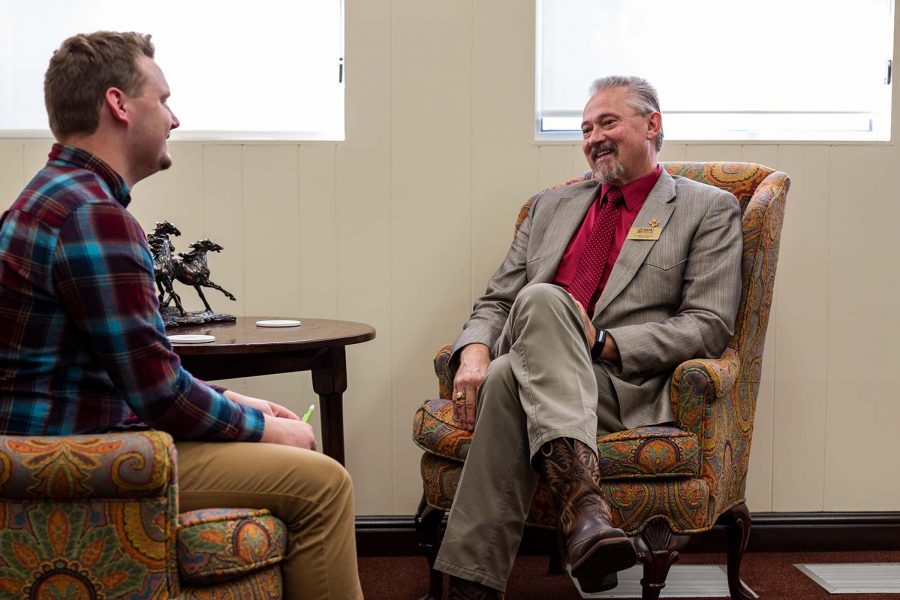 The search committee to choose the next president of Midwestern State University was announced on Sept. 16.  They will immediately begin their process of choosing the first Midwestern State University president to begin their term under the Texas Tech system.  Mark Griffin, vice chairman and member of the Texas Tech board of regents, will be leading the search committee for the next university president.

“It’s an honor to serve the Texas Tech University system and Midwestern State University… [in] identifying the next accomplished leader of this great institution,” Griffin says.  “Our committee’s unique perspective will be invaluable in ensuring the MSU Texas community’s voice is heard throughout the search process.”

Former President Suzanne Shipley announced her retirement in early June of this year, concluding her six year tenure and passing the baton to a successor.  Shipley, in her retirement address, noted the end of her term representing a significant bookend for the next president to step into.

“MSU stands before two great opportunities in the coming academic year—our proposed inclusion in the Tech System in September and the launching of our Centennial in January 2022,” Shipley said in her retirement address.  “I am so proud to have accompanied this strong and vibrant university on its journey to such a promising future.”

A few months later, Midwestern State University is now a part of the Texas Tech system and James Johnston has been interim president since Aug. 5.  Johnston hopes to move from the temporary position to being selected as Shipley’s successor. Johnston believes his personal connection to the university and close experience with the position makes him a valued candidate for the 12th selection of the campus’s president.

“I have roots here. I love this university; I’ve done a lot of work here,” Johnston said. “I certainly would love the opportunity to continue in this role.”

Johnston believes the selection of the 12th president will be much more competitive than previous selections, as a consequence of Midwestern State University’s inclusion into the Texas Tech system.

“I expect that now we’re a university within the Texas Tech University system, that changes the applicant pool,” Johnston said. “Individuals that may not have looked at us, as an independent university, may well look at us as a system university.”

Tedd Mitchell, the chancellor of the Texas Tech University system, agrees with Johnston’s diagnosis that the selection is a unique juncture in Midwestern State University’s history.

“As a leading liberal arts university, MSU Texas is a remarkable institution with a tremendous future that we are proud to have as a member of the Texas Tech University System,” Mitchell said. “We believe this opportunity will attract highly qualified candidates as we search for the university’s next president.”

Discussing how the search process has changed in Midwestern State University no longer being an independent entity, Johnston believes that the process will be shorter with some of the complications of finding a search firm being nixed through the university’s status as a part of one whole.

“As an independent university we would engage a search firm and that creates for a little bit longer [of a] process because you have to go through the whole application phase to hire a search firm, select them… and then start the process from there,” Johnston says.  “It is the chancellor and the system board of regents who make the final call.”

While the Texas Tech chancellor and board make the decision, the search committee recommends the candidates. The committee to select the 12th university president consists of 12 members, composed of both Texas Tech and Midwestern State regents, donors and chairmen.

“The Board of Regents understands the importance of this decision and is grateful to the MSU Texas stakeholders and campus community for engaging in the process from which we will ultimately select the 12th president of this fine institution,” Griffin says.

When it comes to the speed at which the 12th president will be chosen and succeed former President Shipley, Johnston believes that the timeline depends on the candidate who is chosen. University presidents usually begin their terms at very definitive and easy transitional times.

“They usually have a new president start near the end of the summer to begin a new academic year,” Johnston said.  “As an internal candidate, it would be faster just continuing on, but if I were, say, applying outside and selected, they’d give an appropriate notice and span of time [before the new president would start].”

Johnston believes the determination of the next university president will take about half a year. Even though Johnston is confident in his credentials, he recognizes that his close connection to the university is one of many possible factors in the committee’s interests in choosing a successor.

“Usually they spend around six months [selecting a new president], so early spring or mid-spring I would think they would be able to make a final decision,” Johnston said. “There’s never a sure thing…. You have to represent here what you bring to the table; if that’s a fit for what the university needs… then that’s great.”